New proposal offers U.S. a choice: Keep 10,000 troops in Afghanistan, or none at all 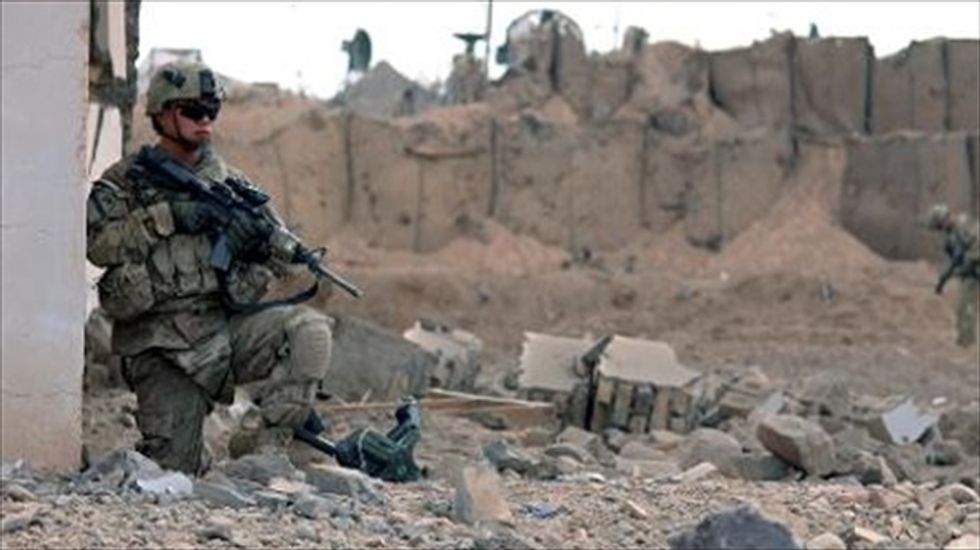 US soldiers inspect the scene of a suicide attack outside a base in Zhari district, Kandahar province on Jan. 20, 2014 [AFP]

Military leaders have proposed keeping 10,000 troops in Afghanistan after NATO's combat mission ends in December -- or else pull out all American forces, a US official said Wednesday.

The commander of the NATO-led International Security Assistance Force (ISAF) in Afghanistan, General Joseph Dunford, presented the option last week to the White House, which is weighing the proposal, the official said, confirming reports in the Wall Street Journal and the New York Times.

"It's fair to say that the intelligence community, the State Department, the Pentagon, all believe that if we're going to have a footprint in Afghanistan after 2014, it should be about that number," said the official, referring to the 10,000 troop level.

"If that can't be, we also believe it would be most prudent to have nothing," the official told AFP, who spoke on condition of anonymity.

The option being debated by the White House also calls for a short stay for the proposed post-2014 force, which would be scaled back and withdrawn within two years, the official said.

Such a scenario would allow Obama to tout the end of the longest US war by the time he leaves office in January 2017. But the move could prompt accusations of an irresponsible retreat after repeated vows by Washington to maintain an enduring presence in Afghanistan.

Any future force after December still hinges on Afghan President Hamid Karzai signing a bilateral security agreement between the two countries, which lays out a legal framework for a US military presence beyond 2014. Karzai has so far refused to sign the deal.

The proposed security pact with Afghanistan would allow for US troops to stay through 2024.

Under the Pentagon proposal, US commanders hope the 10,000 US troops would be joined by 2,000-3,000 forces from other NATO countries, according to the Wall Street Journal.

Military commanders have reportedly told the White House that if Obama rejects the 10,000 troop option, then all American forces should be withdrawn as a smaller force would be unable to provide security for intelligence officers and diplomats.

Vice President Joe Biden, known for his long-running opposition to a large military presence in Afghanistan, is believed to favor a contingent of less than 10,000, comprised mainly of special operations forces.

But defense officials maintain that the elite special forces would be mostly ineffective without intelligence teams tracking militants to be targeted, according the Journal and the Times.

The discussions echo a debate in 2009 on Afghanistan that pitted Biden and some White House officials against the Pentagon, which favored a surge of troops to break a stalemate with the Taliban insurgency.

The troop figures put forward by the Pentagon are in line with numbers previously cited by top commanders nearly a year ago, in which they estimated an international force of about 8,000 to 12,000 -- most of them Americans -- after the end of 2014.

About 37,500 US troops are currently on the ground in Afghanistan, along with 19,000 forces from other countries in the NATO-led coalition.