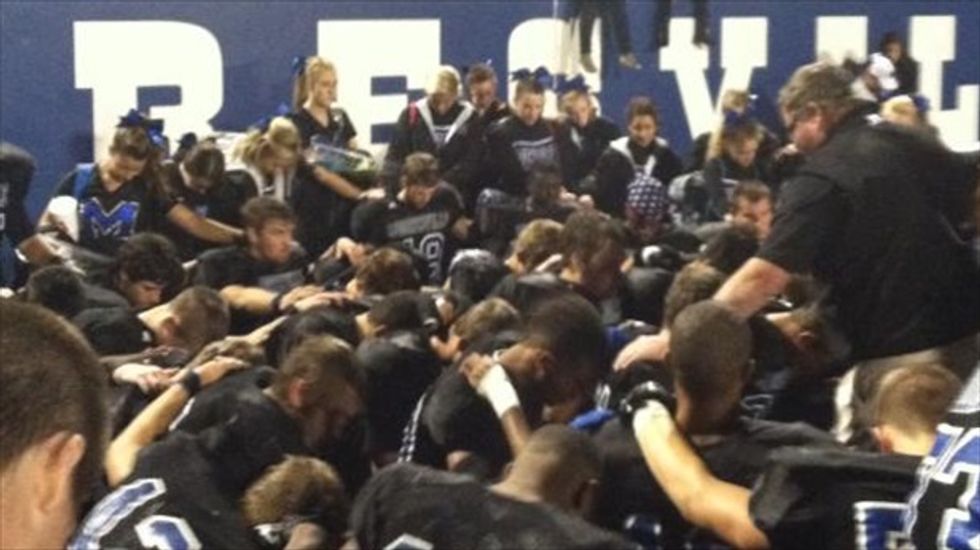 The head football coach for the Mooresville High School Blue Devils in North Carolina has been ordered to stop baptizing his players as well as leading them in prayer according to the Charlotte Observer.

“It is a violation of the Constitution for the Mooresville High School football coach to organize, lead, or participate in prayers or other religious proselytizing before, during, or after games and practices,” Patrick Elliott, staff attorney for the  Wisconsin-based Freedom from Religion Foundation, wrote to the school district last fall.

Following the complaint from the Freedom from Religion foundation, Graded School District Superintendent Mark Edwards met with head football coach Hal Capps and explained that he, and any other teacher or coach, would be violating the constitutional separation of church and state if they led students in prayer. After speaking with him, Superintendent Edwards said that the coach "understood."

According to the letter, “Students have reported that Coach Capps frequently prays with football players at team events and encourages them to go to church and to become baptized."

Edwards pointed out that the baptism in question was not a team baptism and was instead conducted by a church that some of the players belong to. Those players invited Capps to be there with them. “He’s a very proud Christian,” Edwards said.

Capps has since written letters to his players and their families explaining that he will no longer lead the team in prayer.

The Mooresville High School Blue Devils finished their most recent season 11-2, losing in the second round of the playoffs.