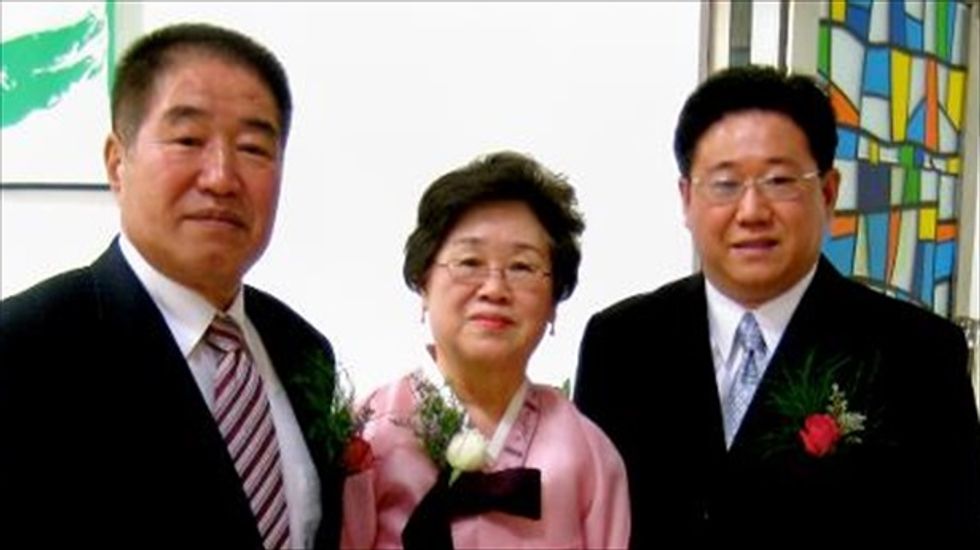 Undated handout photo from FreeKenNow.com shows US citizen Kenneth Bae posing for a photo with his parents, Myunghee Bae (C) and Sung Seo Bae (L) at an undisclosed location [AFP]

The family of a US missionary held in North Korea accepted Thursday ex NBA star Dennis Rodman's apology for an "outrageous" TV outburst, but lashed him saying their loved one's plight was "not a game."

In a statement issued by the sister of Kenneth Bae, jailed for 15 years in the reclusive state last year, they poured thinly-veiled scorn on Rodman after he explained his outburst by saying he was drunk and stressed.

"Our family accepts Dennis Rodman's apology for his outrageous outburst .. As Rodman has stated, being drunk and stressed is not an excuse for what he said, but we acknowledge he is human and we all do make mistakes," it said.

However the statement, issued by Bae's sister Terri Chung, said: "We hope and pray that Rodman's comments and ongoing antics have not further endangered my brother. Kenneth's health and freedom are precarious.

"The fact is Kenneth's life is on the line. Though we understand Rodman enjoyed some laughs and smokes during a couple of basketball games in North Korea, to our family, this situation is no joke.

"This is not a game," added the statement by Chung, a professor based in Seattle.

Rodman was roundly criticised for his angry tirade in an interview with CNN Wednesday, in which he appeared to suggest that Bae had merited the prison sentence handed down last year.

Rodman, who was in the North Korean capital for an exhibition basketball match he had organised to mark the birthday of North Korean leader Kim Jong-Un, apologized in a statement released Thursday.

"I embarrassed a lot of people," he said in the statement cited by CNN, adding: "I'm very sorry. At this point I should know better than to make political statements. I'm truly sorry."

Rodman's trip to North Korea along with a handful of other former NBA players has courted controversy, with accusations of pandering to a totalitarian regime with a terrible record on human rights.

Bae, a 45-year-old tour operator, was arrested in November 2012 as he entered the northeastern North Korean port city of Rason.

North Korea described Bae as a Christian evangelist who smuggled inflammatory material into the country and sentenced him to 15 years' hard labour for allegedly seeking to topple the government.

Asked in the CNN interview if he would use his influence with Kim Jong-Un to make the case for Bae's release, Rodman had said: "I don't give a rat's ass what the hell you think."