Obama to invite 47 leaders to U.S.-Africa summit in August 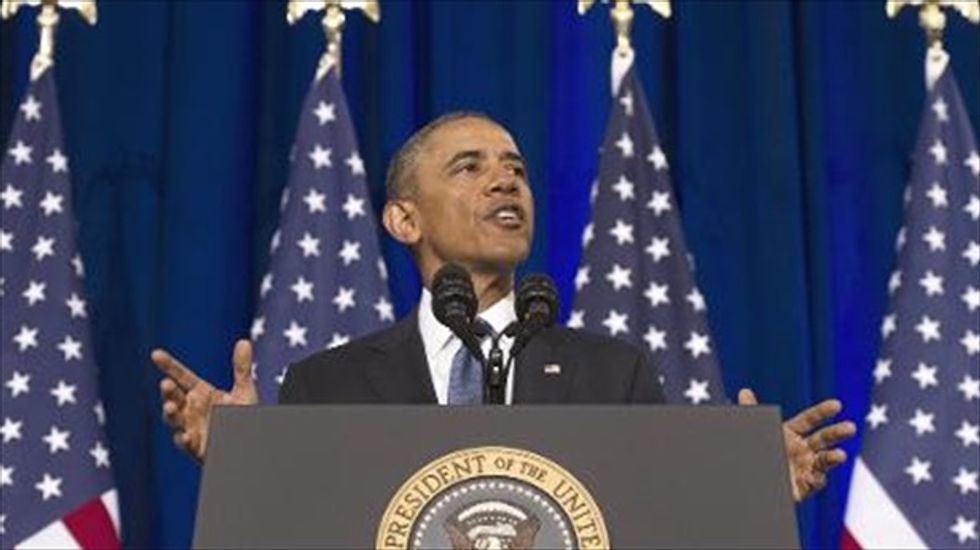 President Barack Obama will invite 47 leaders to a landmark US-Africa summit in August, seeking to widen US trade, development and security ties with an increasingly dynamic continent to which he traces part of his ancestry.

Obama will send out invites to all African nations that are currently in good standing with the United States or are not suspended from the African Union -- meaning there will be no place for states like Egypt or Zimbabwe.

Obama will hold the talks on August 5 and 6, seeking to cement progress from his trip to Africa last year.

A White House statement said the trip would "advance the administration's focus on trade and investment in Africa, and highlight America’s commitment to Africa’s security, its democratic development, and its people."

The idea for the summit, which takes place with Washington increasingly aware of China's attempt to enhance its own diplomatic profile in Africa, was first announced by Obama in a speech in Cape Town in June.

Egypt, which has caused the Obama administration to thread a foreign policy needle with an erstwhile ally after a military takeover, is not eligible to attend as it is currently suspended from the African Union.

The United States maintains sanctions against the Zimbabwean government of Robert Mugabe and key officials over suppression of democracy and what Washington sees as politically motivated violence.

Other notable absentees on the invite list include Sudan and Madagascar. Also not on a list distributed by the White House were Guinea-Bissau and Madagascar. Washington has concerns over the subversion of democracy in both nations.

There will also be no invitation for Sudan, whose president, Omar al-Bashir, has been indicted by the International Criminal Court (ICC).

One notable inclusion is Kenya, where President Uhuru Kenyatta is currently awaiting a delayed trial at the ICC on charges related to violence after an election in 2007 that left 1,000 people dead.

The indictment has been one of the reasons why Obama is yet to visit the homeland of his late father as president.

But Obama has spoken to Kenyatta on the telephone, and the Kenyan leader has enjoyed more interaction with the outside world since a massacre at the Westgate Mall in Nairobi in September claimed by Somalia's Al-Qaeda-linked Shebab insurgents.

The summit, together with Obama's trip to Africa last year, and a promised future visit before he leaves office, might go some way to assuaging disappointment that he did not pay the continent more attention in his first term.

He also held a summit of young African leaders, designed to groom the next generation of the continent's politicians in 2010.

The president also paid a short visit to Ghana in 2009, which marked the only visit to sub-Saharan Africa of his first term.

Obama pledged during his trip to the continent last year to help build "Africa for Africans" and argued that the region's growing economic potential could help it shake off its reputation as simply a recipient of foreign aid.

Amid much talk of a US against China power grab in Africa, following billions of dollars of trade and investment by Beijing in the continent, Obama cautioned against the idea that a new proxy Cold War could play out in Africa.

"This is not a zero-sum game. This is not the Cold War. You've got one global market, and if countries that are now entering into middle-income status see Africa as a big opportunity for them, that can potentially help Africa," the president told reporters.

At the same time, however, he cautioned that nations that simply saw Africa as a source of raw materials would not serve Africans well.

The Obama administration has also been increasing its indirect engagement in regional conflicts in Africa.

The US military last week started transporting the first elements of a Rwandan battalion to the Central African Republic, where they will join an African Union mission.

International forces are trying to restore order after the country plunged into sectarian warfare following a March coup in which the mainly Muslim Seleka rebel group overthrew president Francois Bozize.

US forces also last month rescued Americans fleeing violence in the new nation of South Sudan. Washington was a key mediating player in the country's independence from Sudan.

In 2011, Obama deployed a small detachment of military trainers to Uganda to aid forces hunting down the Lord's Resistance Army and its leader Joseph Kony.

Washington is also increasingly concerned about Al-Qaeda franchises in the continent. In October, US Navy SEALs raided a hideout of a Shebab leader on the Somali coast but withdrew after a firefight.