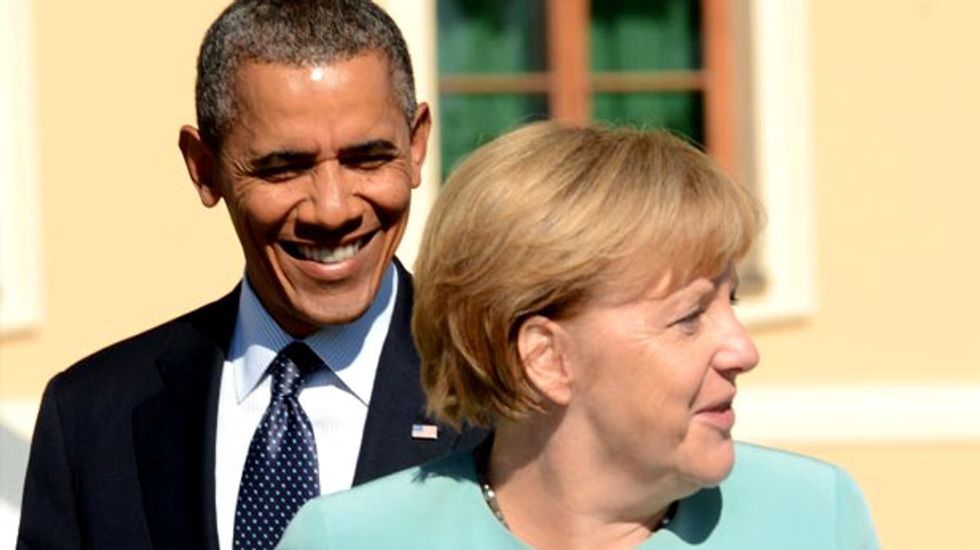 The US intelligence service will continue to spy on foreign governments, President Barack Obama said in an interview broadcast Saturday, although he assured Chancellor Angela Merkel that he would not let intrusive surveillance harm their relationship.

The frank admission comes a day after Obama curtailed the reach of mass US National Security Agency phone surveillance sweeps, but said bulk collection of data would go on to protect America from terrorists.

"And there is no point in having an intelligence service if you are restricted to the things that you can read in the New York Times or Der Spiegel.

"The truth of the matter is that by definition the job of intelligence is to find out: Well, what are folks thinking? What are they doing?", he said.

Nevertheless, Obama said he would not allow the surveillance to harm his relationship of "friendship and trust" with Merkel.

"I don't need and I don't want to harm that relationship by a surveillance mechanism that somehow would impede the kind of communication and trust that we have," he said.

"And so what I can say is: as long as I'm president of the United States, the chancellor of Germany will not have to worry about this," he added.

Obama pledged on Friday that his country's National Security Agency (NSA) would not routinely spy on leaders of America's closest allies, following global outrage at revelations of massive electronic eavesdropping.

Germany has been incensed to learn that the NSA was carrying out widespread spying, including listening in on Merkel's mobile phone conversations.

The NSA allegations were especially damaging in Germany due to sensitivity over mass state spying on citizens by the Stasi secret police in the former communist East.

Norbert Roettgen, head of the Bundestag's foreign affairs committee and a member of Merkel's CDU party, said Obama's comments were "technical" and didn't respond to "the real problem" of "transatlantic divergence" on matters of security and freedoms.

Germany's confidence in Washington will not be restored unless "we sign an accord to protect, in a way that is judicially binding, the data of all citizens," German Justice Minister Heiko Maas said in comments run by the Bild am Sonntag newspaper on Sunday.

Efforts by Berlin to introduce a "no-spy agreement" with the US have so far fallen on deaf ears.

Obama is scheduled to visit Brussels on March 26 for an EU-US summit when the issue is likely to be broached by his European counterparts.

The European Union said Friday that Obama's commitment to reform phone data collection was a step in the right direction, but called on the US president to enshrine the pledge in law.

"I agree with President Obama: More work will be needed in future. I look forward to seeing these commitments followed by legislative action," said EU Justice Commissioner Viviane Reding.