Pastor delivers God’s State of the Union: Obama follows Satan and Jesus can fix the debt 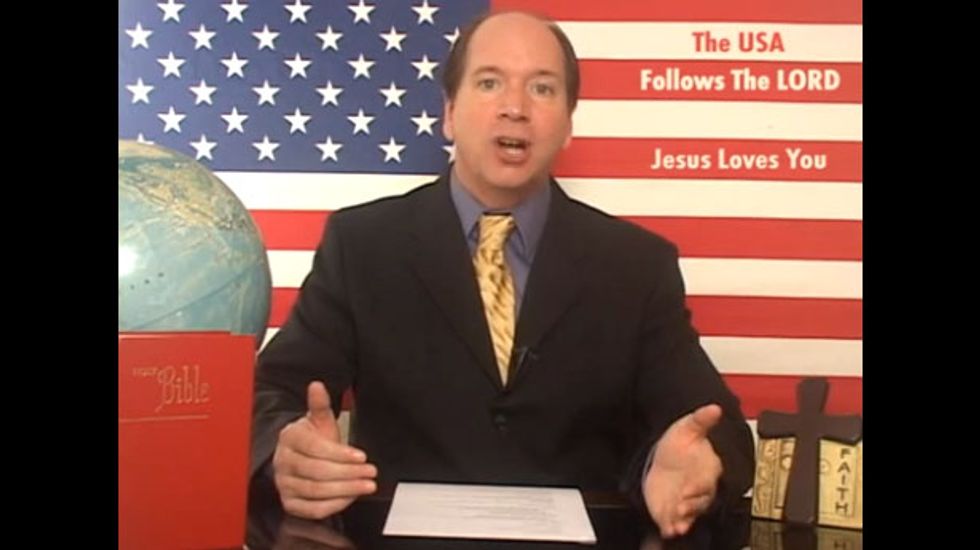 Pastor Steven Andrew on Tuesday night delivered "God's State of the Union" address in response to President Barack Obama's speech to the nation.

The conservative pastor of USA Christian Ministries called on Americans to serve the God of the Bible rather than false gods if they wished to receive his blessings and see their nation's prosperity restored.

It is clear Obama is following Satan, according to the pastor, because he is openly encouraging "homosexual sin" and violating God's unalienable rights "by forcing people to have death panels."

He described Obama as a covetous liar who was not a part of the "Kingdom of God."

Proclaiming Jesus as the Lord of the United States could also solve the nation's financial troubles, Andrew said.

"Americans right now are suffering. There is great economic problems in the United States of America. We have the biggest debt in the world. How is this going to go away? This debt is going to go away by humbling ourselves before the Lord and not by serving Mammon but by putting Jesus Christ first."

Andrew said the United States had been in a covenant with God ever since its founding. The government should serve God, he added, noting our money includes the phrase, "In God We Trust."

"You have the right to liberty, and this liberty is Christian liberty," he said. "All of our Founding Fathers used words that are found in the King James Bible. Liberty means this law of love, where as a Christian I'm not going to force you to do something against your conscience."

"And you have the right to the pursuit of happiness. This is what it means to be an American: You can serve God how God wants you to serve him according to the Bible. You can prosper, you can make money, you can have your own business, you own your land."