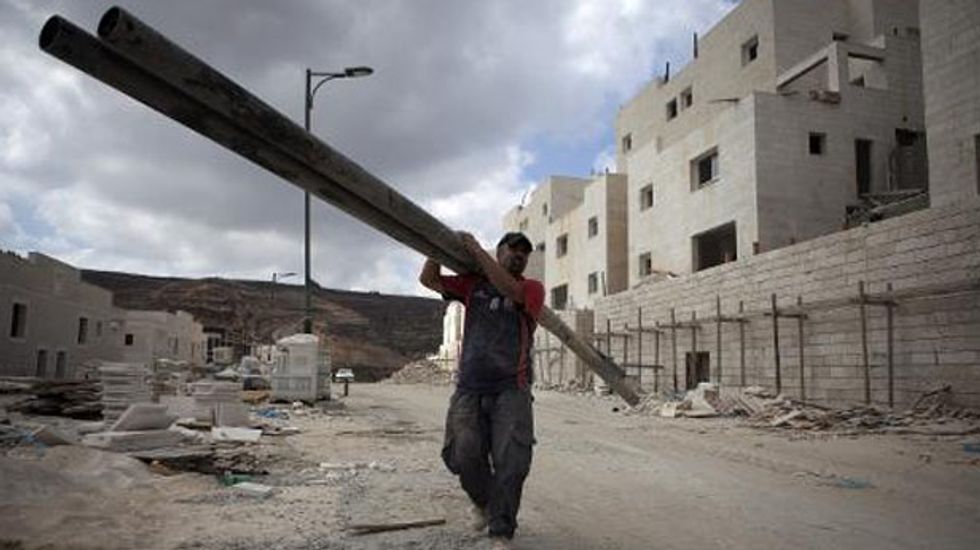 Israel moved ahead Tuesday with plans for another 381 homes for West Bank settlers, prompting Palestinian charges it was more interested in building settlements than building peace.

It was the third such announcement in just over two weeks, and raised to 2,530 the number of new settler homes announced since the start of the year.

"The Israeli Civil Administration, which falls under the defence ministry, has published plans for the construction of 381 extra units in Givat Zeev," he said.

The move comes just three weeks after Israel's release on December 31 of 26 veteran Palestinian prisoners, in accordance with commitments under US-led peace talks.

"This is the third time since the last phase of Palestinian prisoner releases that the government has approved plans for new houses," Amihai told AFP.

The announcement showed that the government of Prime Minister Benjamin Netanyahu is "not serious about the two-state solution and that its actions are contradictory with the negotiations."

Last July, Israel and the Palestinians embarked on nine months of direct negotiations at the urging of US Secretary of State John Kerry.

But over the past six months, Israel has not slowed its construction on land the Palestinians want for a future state, raising questions over its commitment to the talks.

"Netanyahu's government does not want peace," he told AFP.

"This decision confirms that Netanyahu's government only wants to continue settlement building, which will destroy any possible peace."

With very little progress visible and the April deadline for a framework agreement looming, Erakat said there was no chance the Palestinians would contemplate any extension of the talks.

"We've not been presented with a (plan for) extending negotiations, but we will not extend them for even an additional day after the nine month period we agreed on," he said.

"There are still three months left which Israel can use to move with us towards a peace agreement, but its actions confirm that it's not interested in this. It's destroying everything that might help a comprehensive peace agreement."

Netanyahu has also denied that Israel is breaching any prior commitment to the peace talks in its persistent settlement expansion.

"We are keeping in line exactly with the understandings we undertook at the beginning of the talks," he said in an address to the foreign press on January 16.

"Israel undertook no restraints on construction."

Israeli construction on land the Palestinians want for a future state is one of the thorniest issues of the peace process, and brought down the last attempt at direct talks in 2010.

The international community considers all Jewish settlements built on land Israel seized in the Six Day War of 1967 to be illegal.