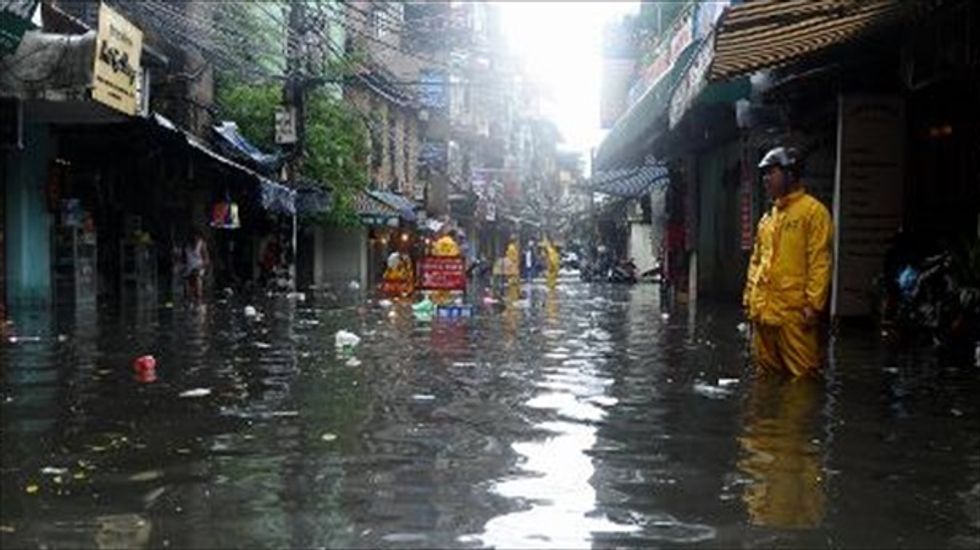 A worker from the municipal environmental service walks on a flooded street in Hanoi on Aug. 8, 2013 following a typhoon that hit Vietnam [AFP]

China, Korea and Japan have been placed in the firing line of powerful tropical cyclones by a warming of water in the western Pacific, according to a three-decade study published on Thursday.

Researchers led by Chang-Hoi Ho from Seoul National University in South Korean looked at five sets of background data for tropical cyclones that occurred in the northwest Pacific between 1977 and 2010.

During this time, the surface waters of the western Pacific were much warmer than the central and eastern parts of the ocean, they found.

This temperature difference, also called a gradient, went hand-in-hand with changes to a strong wind system over the Pacific called the Walker circulation.

The result was that cyclones tended to follow the line of the East Asian coast, from the South China Sea upwards, before making landfall in China, Japan and Korea -- by which time they had reached their maximum punch.

The change also meant that more cyclones generated in the northern part of the South China Sea.

As a result, storms headed for southern China, Vietnam or Taiwan began life too close to land to build up to maximum speed by the time they reached the coast.

More work is needed to confirm whether the temperature gradient is a result of man-induced global warming or a natural variation of a kind that lasts decades.

"If the past changes of large-scale environments are evidence, or a result of, global warming, it can be assumed that in the future more catastrophic tropical cyclones will strike East Asia than ever before," said Ho.