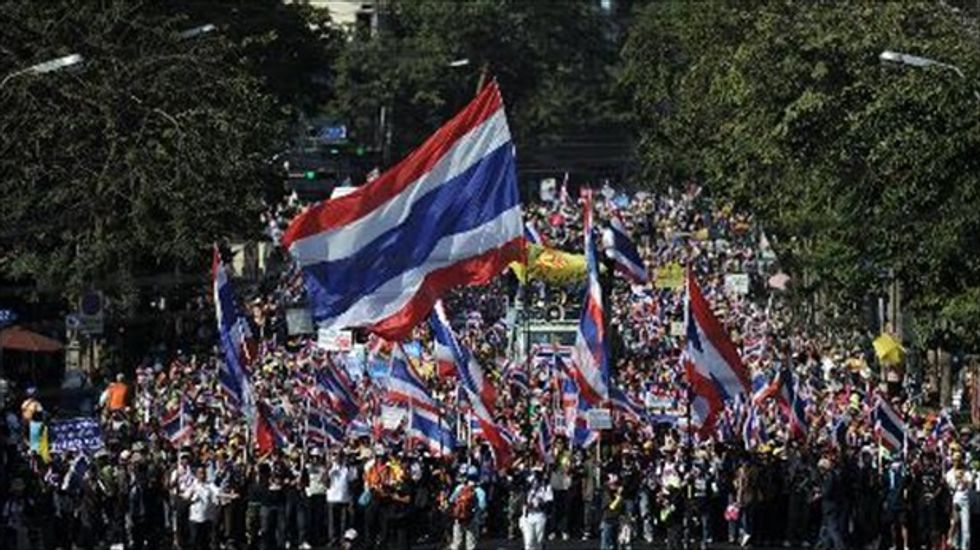 Thai anti-government protesters march through the streets of Bangkok in a move to 'shut down' the city on Jan. 13, 2014 [AFP]

Angered by opposition protests seeking to thwart upcoming polls, a burgeoning pro-election movement in Thailand is taking a stand to demand their votes are respected, with candlelight vigils and Facebook campaigns.

Seeking a middle ground in a bitterly divisive political conflict, the kingdom's newest street activist group aims to challenge anti-government demonstrators who want to install an unelected "people's council" to run the country.

"We want to vote. We want to vote! – February 2, go to vote!," several hundred campaigners chanted while holding candles in a park in central Bangkok this week.

"Now Thai people don't listen to one another, so we want them to see the light instead," said one of the campaign organisers, who asked not to be named for fear of being targeted by the demonstrators.

"Our intention is to tell the protesters, 'please stop, because we have suffered enough'," added the activist, who helped to organise the rally through social media after seeing police officers wounded in the mass opposition demos gripping the city.

Opponents of Prime Minister Yingluck Shinawatra have staged more than two months of street protests aimed at forcing her elected government from office and installing an appointed body to oversee loosely defined reforms such as an end to alleged vote buying.

They aim to curb the political dominance of Yingluck's billionaire brother, fugitive former premier Thaksin Shinawatra, whom they accuse of controlling the government from self-exile.

But a growing number of Thais are starting to speak out to insist that the protests are not in their name.

Several Facebook pages supporting the election and seeking a peaceful solution have been set up, following street violence in which eight people have been killed and hundreds wounded. People have posted photographs of themselves online holding signs which read "Respect My Vote".

The pro-election supporters are mostly Bangkok residents ranging from professors to university students, activists and celebrities, carrying out symbolic activities such as releasing white balloons and wearing white shirts as a sign of neutrality in the country's colour-coded political conflict.

"The protesters have generalised that all Bangkokians are on their side, but we are the people who have been frustrated and pressured for a long time," said Patcharee Angkoontassaneeyarat, the administrator of one of the pro-election Facebook pages.

"The protests have gone beyond the limits of our patience. We also want to make our voices heard," added Patcharee, whose Facebook slogan "That's enough" has received more than 40,000 "likes".

Thailand has been rocked by years of often-violent demonstrations by rival protest movements -- notably the royalist "Yellow Shirts" and their arch-rivals the "Red Shirts", who are broadly supportive of Yingluck and her older brother, ousted former premier Thaksin.

The current protesters say Yingluck is a puppet for her brother who controls her two-year-old government from overseas, where he fled in 2008 to avoid going to jail for a corruption conviction.

Protests by the Yellow Shirts helped to eject Thaksin or his allies from power three times, while support from the Red Shirts swept Yingluck to power in 2011 following a deadly military crackdown on their pro-Thaksin street protests.

The opposition protesters now on the streets are a mixture of former Yellow Shirts, royalists, southerners, urban middle class and other Thaksin opponents.

Experts say a "third voice" is now spreading -- mainly though social media -- among people who oppose the protests.

"They are people not only in Bangkok but also in towns in other provinces who have been patient up to now, but one day they just could not stand it anymore," Puangthong Pawakapan, professor of political science at Bangkok's Chulalongkorn University, told AFP.

Some of those who have dared to speak out in opposition to the anti-government protests have received a hostile response from friends who hold different views.

"They asked why didn't I help the country? Why didn’t I blow whistles with them?" law student Amonteera Pratumtong told AFP while holding a flickering candle in her hand.

"I told them I can make my own choice."