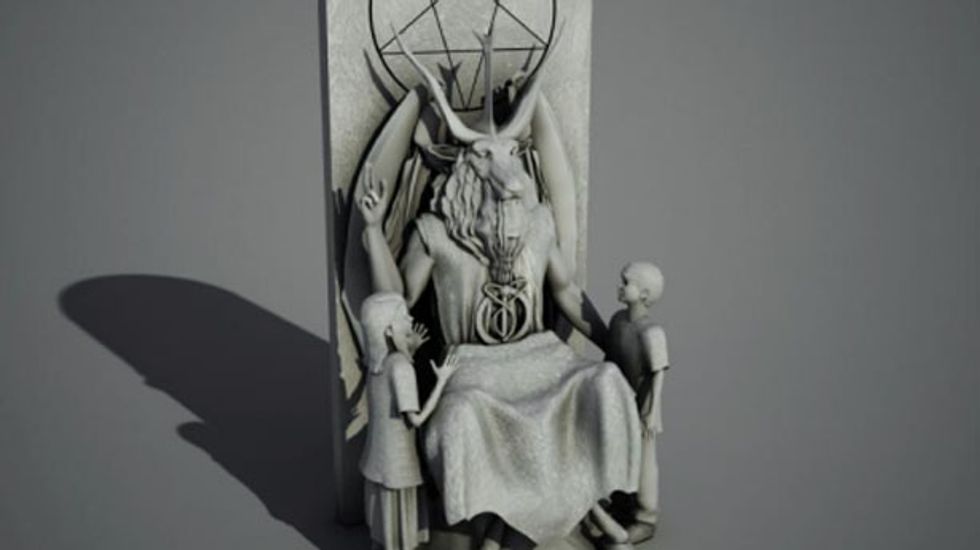 The Satanic Temple, a religious group based in New York City, on Monday unveiled their design for a monument they hope to erect at the Oklahoma Statehouse.

The 7-foot-tall monument would include a goat-headed Baphomet figure sitting cross-legged on a stone slab, flanked by two smiling children. The monument would also include quotes from poets Lord Byron and William Blake.

"The monument has been designed to reflect the views of Satanists in Oklahoma City and beyond. The statue will serve as a beacon calling for compassion and empathy among all living creatures. The statue will also have a functional purpose as a chair where people of all ages may sit on the lap of Satan for inspiration and contemplation," spokesman Lucien Greaves explained.

The group offered to donate a monument last month, after State Rep. Mike Ritze (R-Broken Arrow) and conservative Christians were allowed to erect a Ten Commandments monument on the statehouse grounds.

Lawmakers in Oklahoma, however, have insisted that the Satanists should not be given the same treatment as Christians.

"This is a faith-based nation and a faith-based state,” Rep. Earl Sears (R-Bartlesville) said. “I think it is very offensive they would contemplate or even have this kind of conversation."

After other groups -- including PETA and the Church of the Flying Spaghetti Monster -- asked for their own displays, the Oklahoma City Capitol Preservation Commission placed a moratorium on new monuments at the statehouse.

But the Satanic Temple insists erecting a monument of their own is within their constitutional rights.

“Our monument celebrates an unwavering respect for the Constitutional values of religious freedom and free expression," Greaves explained. "Satanism is a fundamental component at the genesis of American liberty. Medieval witch-hunts taught us to adopt presumption of innocence, secular law, and a more substantive burden of proof.

"Today, we are rightly offended by the notion of blasphemy laws and divine fiats. Acknowledging wrongful persecutions has helped shape the legal system that preserves the sovereignty of our skeptics, heretics, and the misunderstood. It has shaped a proud culture of tolerance and free inquiry. This is to be a historical marker commemorating the scapegoats, the marginalized, the demonized minority, and the unjustly outcast."

"We trust that this unique monument will also prove a favorite tourist attraction to Oklahoma’s Capitol for years to come," Greaves remarked.

[Image courtesy of The Satanic Temple]