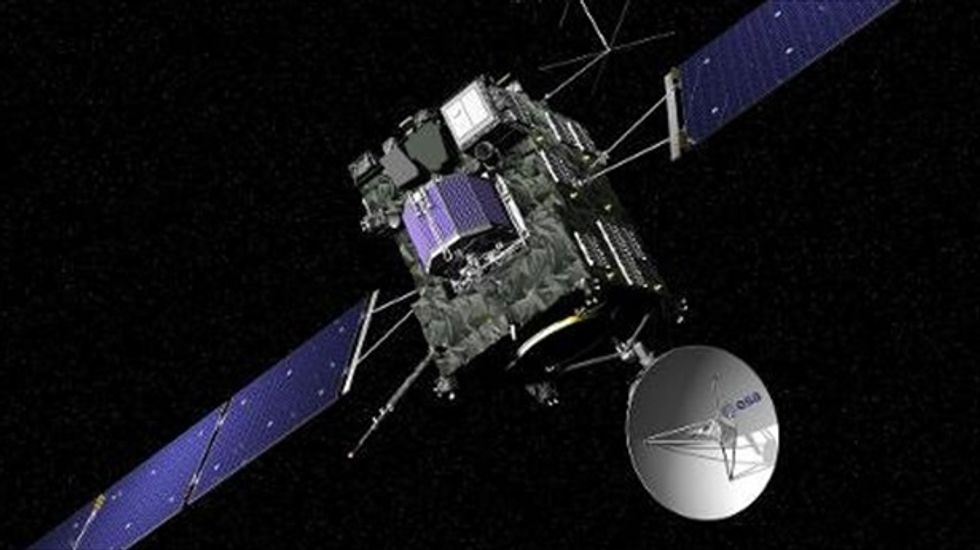 One of the most ambitious missions ever undertaken by European scientists will pass a critical test on Monday, when the Rosetta spacecraft “wakes up” after almost three years of deep-space hibernation and prepares for the first-ever comet landing.

Rosetta has travelled to a point located around 675 million kilometers from the sun since it was launched by the European Space Agency (ESA) in March 2004, and for months has been quietly closing in on its final destination: Comet 67P/Churyumov–Gerasimenko.

Most of the spacecraft’s instruments were turned off to save power during its nearly 10-year journey.

Scientists at ESA’s control room in Darmstadt, Germany, will anxiously wait for an internal alarm clock to “wake up” the cosmos-roaming machine on Monday at 10am GMT.

The first signal from the spacecraft is expected sometime after 5:30 p.m.

The Rosetta mission will then proceed to extensively map the comet’s surface for months and attempt an unprecedented landing in November.

If the Rosetta wake-up is a success, the spacecraft will prepare to dispatch its lander Philae for a close-up study of the comet nucleus.

Philae is due to take pictures of the approximately 4 kilometer-wide comet and will eventually drill into its surface.

Searching for origins of life

By studying the comet, scientists hope to get a clearer idea of how the solar system was formed billions of years ago.

“Comets are like time capsules, remnants from the birth of the solar system,” Professor Mark McCaughrean, a senior ESA scientist, told a press conference in Darmstadt in December. “[The Rosetta mission] should offer great clues to the origin not only of the solar system but potentially even life.”

Scientists say comets probably brought much of the water to our planet and could even have provided the complex organic molecules that may have played a crucial role in the evolution of life on earth.

The name of the mission was inspired by the Rosetta Stone discovered in Egypt that was crucial in deciphering ancient hieroglyphics.

Like the archeological treasure that helped historians understand much of the ancient world, space scientists hope the Rosetta spacecraft will pave the way for a new understanding of the universe’s past.