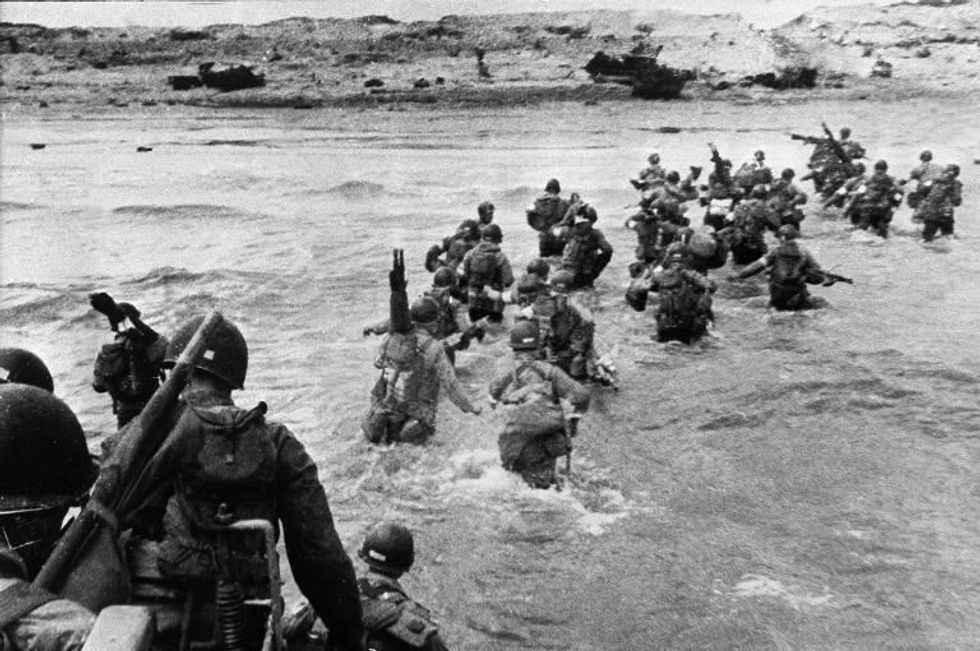 Looking out at the Channel from France's Lower Normandy beaches, there is little reminder today of the harbour built after the D-Day landings of tens of thousands of Allied soldiers that took the Germans by surprise in 1944.

Just a handful of large concrete blocks remain of a engineering feat by the Allies that became a crucial logistical support leading to their victory in Normandy.

The concrete blocks were part of an artificial harbour that was put together on the French coast in barely two weeks, allowing supplies and reinforcement troops to land in the absence of an Allied-controlled port.

But as France gets ready to commemorate 70 years since the landings, even these last vestiges look set to disappear as the sea is doing what the Germans failed to do -- wear away the artificial harbour in Arromanches.

"With every storm, we see a little bit disappear. If we do nothing, there will be nothing left in 10 years," said Patrick Jardin, mayor of Arromanches commune.

"Of these still large caissons, we will see just a few bits at low tide."

Some 115 of the so-called Phoenix caissons, or retaining structures, along with sunken old hulks formed a breakwater of about eight kilometres (5 miles) that provided calm waters for a harbour measuring about 500 hectares or 1,000 football fields, said Erick Leplanquais, a guide at the D-Day Museum.

After 130,000 soldiers crossed the English Channel on June 6, 1944, the Allies knew they had to keep the troops supplied as well as keep getting reinforcements in to withstand the Germans' counter-attack.

However, they had no harbour on the French coast.

To get around the problem, they decided to build one in England which could be assembled off the French coast once its parts had been towed across the Channel.

Some 255 trawlers were used to transport the parts that would eventually form the so-called Mulberry harbour.

The assembly work began just two days after D-Day. By June 14 it was operational, becoming a crucial logistical backbone for the Allied troops.

Losing a caisson every year

Almost seven decades on, the last remnants of the engineering feat are wearing away.

"Basically, we lose a caisson every year," said Frederic Sommier, director of the D-Day Museum, adding that there are now just "about 20 visible at high tide and low tide".

Almost all of the remaining caissons are cracked.

Jardin wants to buy time before a permanent solution can be found to preserve them.

"We just have to keep them about 20, 30 or 40 years. After that, we will undoubtedly have other forms of technologies to keep the memory of all that," the mayor said.

He suggested building a barrier to stop the waves from crashing against them.

But that alone is estimated to cost up to tens of millions of euros, said the mayor whose administrative district, or commune, includes just 600 inhabitants.

That is a hefty price tag compared to the 4.8 million euros ($6.5 million) invested by the American Battle Monuments in 2010 for the preservation of Pointe du Hoc -- a cliff overlooking the English Channel about 30 kilometres from the Mulberry harbour site.

There the funds were used to reinforce the cliff which had been eroded by the sea, delaying by 20 to 30 years the disappearance of a bunker and a monument erected in remembrance of 225 rangers who scaled the 30-metre high (100-foot) cliff on D-Day and seized German artillery.

The Arromanches mayor bemoans that it would be some time before a solution could be found for the caissons, claiming that no ministry would tackle the issue head-on.

However, the president of the Lower Normandy regional council, Laurent Beauvais, was more optimistic, saying that there was a "real consensus" on preserving the remnants of the harbour.

The Mulberry harbour is one of the reasons that the commune is asking France to seek world heritage protection status for the Lower Normandy beaches, he said.

The formal request was put to the French government in mid-December, and the region hopes that France would in turn transmit its application to the UN cultural agency UNESCO before the 70th anniversary commemoration celebrations in June.