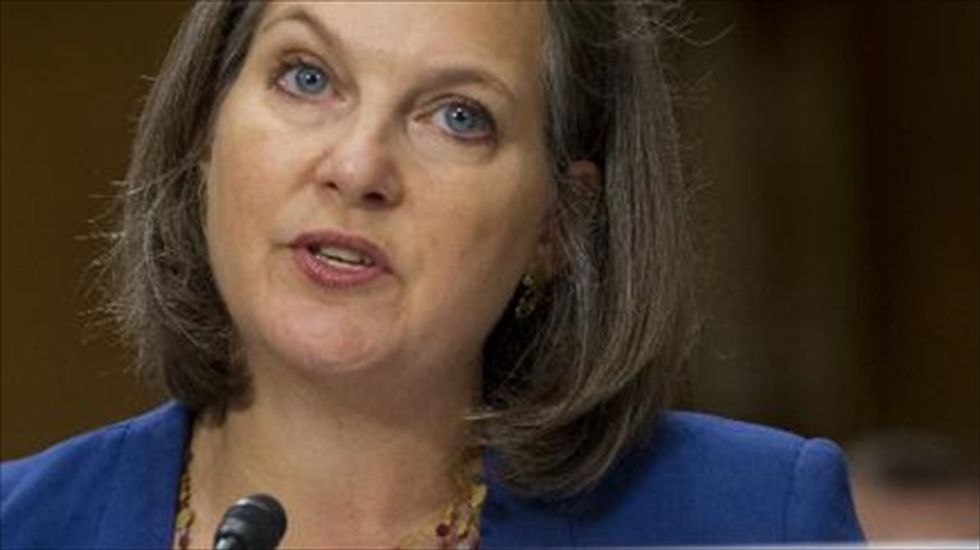 Assistant Secretary of State for European and Eurasian Affairs Victoria Nuland testifies before the Senate Foreign Relations Committee in Washington on Jan. 15, 2014 [AFP]

US lawmakers warned Wednesday they may slap sanctions on Ukraine and impose visa bans on its leaders amid a crackdown on pro-Western demonstrators.

"This committee isn't deaf to those brave people whose capacity for hope and appetite for freedom has compelled them to take to the streets. The world is indeed watching," Senator Bob Menendez told a senate committee.

He was speaking after some 50,000 Ukrainians massed in Kiev on Sunday to protest the beating of a prominent former minister and opposition leader Yuri Lutsenko.

It marked the first use of force against a leader of Ukraine's latest wave of protests and threatened to reignite the worst political crisis of President Viktor Yanukovych's four-year rule.

Washington has been profoundly disappointed that Yanukovych in November rejected an association agreement with the European Union, and instead deepened ties with former Soviet master, Russia.

The decision has sparked weeks of protests in Kiev, and left US and EU officials scratching their heads about their next moves.

Assistant Secretary of State for European Affairs Victoria Nuland said "all tools of government are on the table" including sanctions.

But Menendez warned that the Senate Foreign Relations committee, which he chairs, might not wait for the State Department to act first.

"If the Yanukovych government continues to act against its citizens, as we have seen so far, then I'm not sure that we will wait for the State Department to look at sanctions and visa revocations against those committing those acts," he said.

"The committee, certainly the chair, is going to entertain legislation that will do exactly that."

An opposition Ukrainian delegation attended the hearing after opposition lawmaker Arseniy Yatsenyuk at the weekend called for economic sanctions on "the gang now violating the law and the constitution."

Nuland, who last month twice visited the demonstrators on Maidan Square on trips to Kiev, denounced the attack on Lutsenko, as well as "other acts of intimidation and criminality and efforts to stifle the media and political activity across the country."

She urged Yanukovych to return to talks with the IMF to negotiate loans to help boost Ukraine's economy -- after he secured a $15 billion bailout deal with Russian President Vladimir Putin.

"The IMF is offering a proven, if arduous, long-term diet plan back to good health for Ukraine," Nuland told the lawmakers. "Like any tough health regime, it will require work and sacrifice but the rewards are great.

"When Ukraine's leaders are ready to invest in that kind of a program, the United States and our EU partners will help them sustain that commitment," she pledged.

Assistant Secretary for Human Rights Thomas Melia insisted the crisis should not be seen as a tug-of-war with Moscow, and that Washington did not want "to bludgeon or pressure the Ukrainians into associating with us."

"The Ukrainian government can either choose to be bullied by one of its neighbors or they can choose to go through the open door to the West," he said.

But Menendez shot back that "there is a difference between an open door, as you describe it, full of opportunity for the Ukrainian people that the United States and the West presents and a economic coercion and intimidation that the Russians pursue."

"Pushing back on the economic coercion and intimidation, in my mind, is not a tug of war, it's creating the space for Ukrainians to decide their own future."

And veteran Republican senator John McCain, who also visited Kiev in December, said the United States must "be assisting, morally, the Ukrainian people."

"They cry out for our assistance and our moral support in a struggle which is totally unfair."