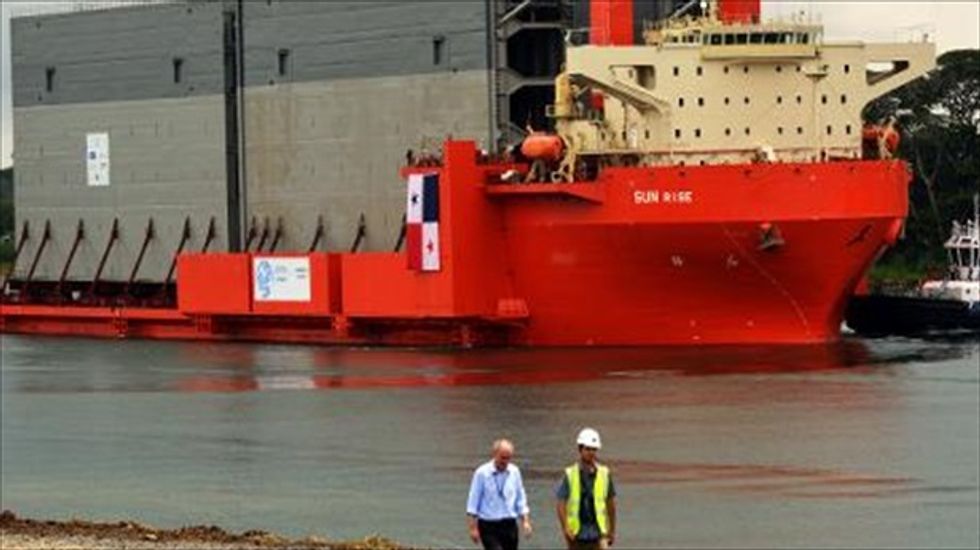 File picture shows a ship carrying four new gates for the Panama Canal heading for the port of Colon, west of Panama City, on Aug. 20, 2013 [AFP]

A consortium working on expanding the Panama Canal has proposed that local authorities co-finance a huge budget gap that sparked a bitter dispute threatening the project.

The Grupo Unidos por el Canal (GUPC) consortium, led by Spanish builder Sacyr, had warned it would suspend work on the major waterway by Monday unless Panama paid for the $1.6 billion in cost overruns.

But as the deadline passed, GUPC issued a statement saying the "cofinancing of unforeseen costs" would enable continuation of work and completion of the project by 2015.

This, it added, would "allow for revenues totaling billions of dollars annually for Panama."

But canal authorities said there would be negotiating outside the existing contract. And analysts said GUPC likely underbid to get the job knowing full well it would be short.

Meanwhile, canal administrator Jorge Quijano told AFP that construction was continuing at "low intensity," much as it had over the past week.

Union and government officials have said less than half the project's workers were still on the job as of last week.

Quijano also has stressed that construction would go ahead with or without GUPC.

GUPC, which includes Impreglio of Italy, Belgium's Jan de Nul and Constructora Urbana of Panama, has agreed to negotiate with the canal authority within the contract.

The overall canal upgrade was supposed to cost $5.2 billion, including GUPC's $3.2 billion contract to build a third set of locks for the century-old canal, which currently welcomes ships that carry up to 5,000 containers.

Work on the canal began in 2009 with the goal of being done by 2014 to coincide with the waterway's 100th birthday.

But completion was pushed back to 2015 after a first disagreement between the canal authority and GUPC over cement quality.

In the current dispute, GUPC says it ran into costly overruns because the canal authority gave the builders the wrong information regarding the area's geology.

On December 30, the consortium threatened to halt work on the third set of locks, the most important part of the project, giving the canal authority 21 days to agree to pay the $1.6 billion in unanticipated costs.

The dispute has reached the European Commission, whose vice president Antonio Tajani has offered to mediate.

The European Commission is seeking "a financial solution so that the companies can resolve an immediate cash flow problem and the work can continue at the expected pace," Spanish Foreign Minister Jose Manuel Garcia-Maragallo said Monday.

A meeting was scheduled Tuesday with insurer Zurich America International to discuss a $600 million guarantee on the construction of the third set of locks.

"They are not going to stop (work), they tell me. But we will have to wait until Tuesday, because the meeting with the insurer could clear up some things," Panama's Minister for Canal Affairs Roberto Roy told AFP.

But construction union leader Saul Mendez said workers were frustrated, and had not been informed by the company if work would stop or not.

A construction delay could cost Panama an estimated $300 to $400 million in lost business from the huge container ships.

The ripple effects would be broader still, given the importance to East-West trade of a widened waterway, which would double the amount of cargo that could be moved between the Pacific and the Atlantic.

The United States has already spent millions of dollars adapting its ports on the Gulf of Mexico and the East Coast to receive the large container ships.