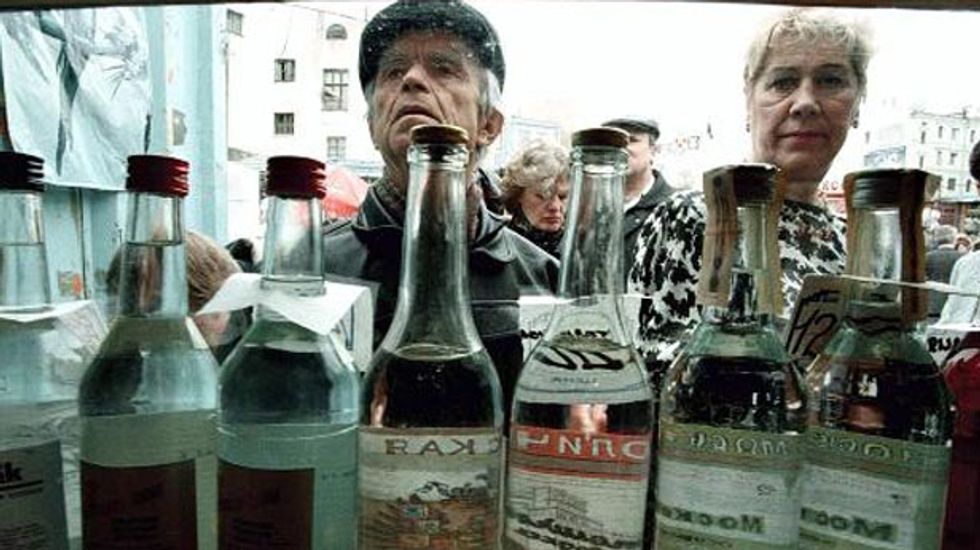 Vodka was a key contributor to the high death rate of Russian men under 55, according to researchers who highlighted the near-immediate, life-extending benefits of cutting back.

The findings published in The Lancet medical journal add to the already vast body of evidence on the dangers of binge drinking.

Overall, a quarter of Russian men die before the age of 55. The equivalent death rate of British men was about seven percent.

For the study, researchers asked 151,000 Russians how much vodka they drank and then followed them for up to ten years, during which period 8,000 died.

Using a subgroup of some 57,000 men, all smokers, the team then determined "higher risks of death" among those who drank three or more half-litre bottles of vodka per week, than those who drank less than a bottle.

The death rate among 35-54-year-olds was 16 percent for less than a bottle a week, 20 percent for one to 2.9 bottles, and 35 percent for three or more bottles per week.

The causes for the excess mortality were mainly alcohol poisoning, accidents, violence, suicide and diseases like cancer.

"This...study reinforces other evidence that vodka is a major cause of the high risk of premature death in Russian adults," said the study.

It found that health policy was also a factor -- under restrictions imposed by Mikhail Gorbachev alcohol consumption and death rates fell about 25 percent, rising again after the collapse of communism.

"Since the 2006 Russian alcohol policy reforms, the consumption of spirits has fallen by about a third and so has the risk of death before age 55, although that risk is still substantial," said a statement.

Study leader David Zaridze from the Russian Cancer Research Centre in Moscow said this finding illustrated that "people who drink spirits in hazardous ways greatly reduce their risk of premature death as soon as they stop".

In a comment on the study, Juergen Rehm from the Centre for Addiction and Mental Health in Toronto said the volume of alcohol consumed in Russia on its own could not explain the higher mortality.

"It is the combination of high overall volume with the specific pattern of episodic binges," he said.

"Since the average live expectancy from birth for men in Russia is still only 64 years, ranking among the lowest 50 countries in the world, more effective alcohol and tobacco policy measures are urgently needed."