Surprise! Even some Christians support Satanist display at Oklahoma Capitol 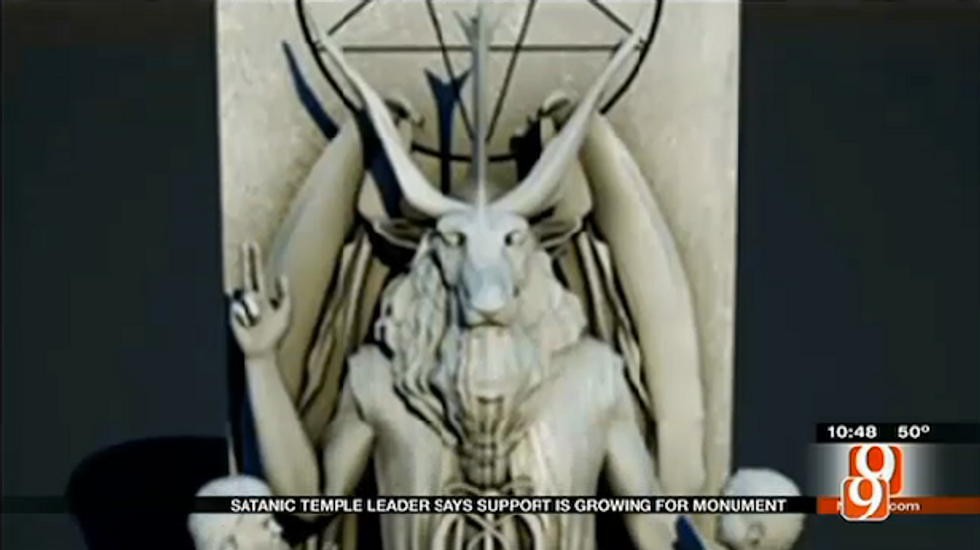 The leader of a Satanic temple said he has been touched by the support his group has received for its proposal to place a monument next to the Ten Commandments at the Oklahoma State Capitol.

"It's really encouraging. It's really moving. We do get a lot of messages that start out with the caveat, 'You know I am a Christian.' However, and they explain that they appreciate what we're doing," Lucien Greaves, a spokesperson for the Satanic Temple, told KWTV.

The New York City-based group proposed a 7-foot, goat-headed Baphomet figure to be placed on a stone slab, flanked by two smiling children, on the capitol grounds after a Republican lawmaker and conservative Christians were permitted to erect the monument to the Mosaic laws.

"It's not a call to war against one side or the other, it's actually a call for reconciliation to have a plurality of voices,” Greaves said. “There is no singular voice of the Oklahoman, you need to embrace the diversity of your population and see that no single politician's view represents the entirety of the law abiding citizenry in Oklahoma."

He said support for the monument, which he suggested would allow children to have their pictures taken on the figure’s lap for family fun, is growing by the day.

"We've gotten a lot of messages from people saying that they served or are serving in the armed forces, and they feel that these values are exactly what we fought for," Greaves said.

"This is kind of what America was based on, freedom of religion. And for us to say whether you believe in it or not, that it shouldn't be there, is kind of wrong," said resident Bailee Boyce.

But others agree with some state lawmakers, who argue that Satanists should not be given the same treatment as Christians.

“Having little kids around it, that's just ridiculous,” said Terry Hill, pastor of the Canadian County Cowboy Church. “I mean, don't understand where they come from.”

"We hope every one of them gets saved because they're going to live with Satan in a bad place for an eternity, and in my mind, that's the worst thing that could happen," Harvey said.

The Oklahoma City Capitol Preservation Commission has placed a moratorium on new monuments until a lawsuit over the Ten Commandments monument is resolved. Other groups, including PETA and the Church of the Flying Spaghetti Monster, have petitioned for their own displays.

"We have to let this play out however it plays out, but we'll keep pushing to make sure that it's going ahead," said Greaves, who submitted designs to the preservation commission.

The temple intends to create the monument even if its proposal is rejected.