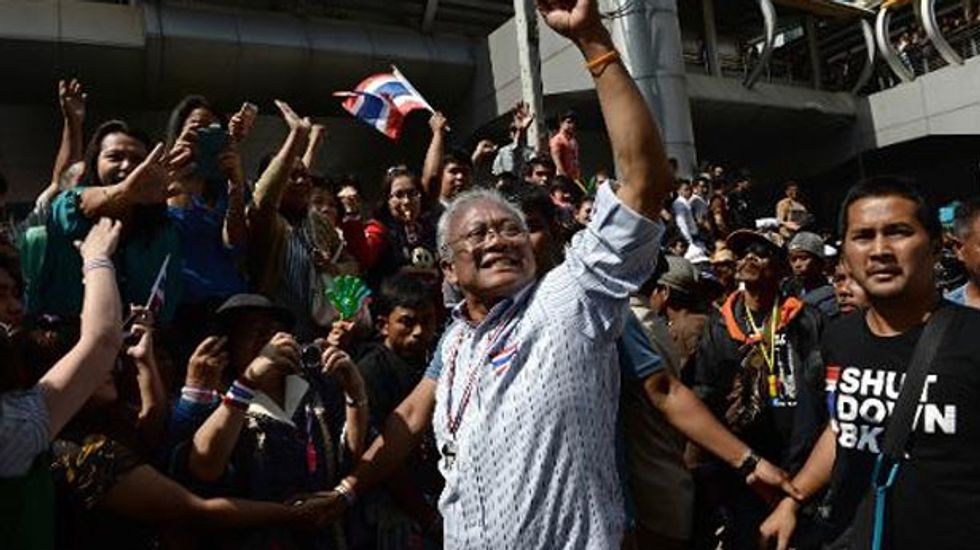 Thailand on Tuesday declared a 60-day state of emergency in Bangkok and surrounding areas to tackle mass street protests aimed at overthrowing the government.

"The cabinet decided to invoke the emergency decree to take care of the situation and to enforce the law," Deputy Prime Minister Surapong Tovichakchaikul said, noting that protesters had prevented officials from going to work.

The decree will come into effect from Wednesday.

The move follows weeks of mass rallies in the city that have sparked several bouts of violence, including grenade attacks and shootings that each side has blamed on the other.

Prime Minister Yingluck Shinawatra is under intense pressure from demonstrators, backed by the royalist establishment, to step down after more than two months of street rallies aimed at ousting her government and installing an unelected "people's council".

She has called an election for February but the main opposition party is boycotting the vote. The protesters are seeking to disrupt the polls and have prevented candidates from registering in some southern constituencies.

The demonstrators have staged a self-styled "shutdown" of Bangkok since January 13, erecting roadblocks and rally stages at several key intersections, although the number of protesters has steadily fallen since the middle of last week.

Dozens of people were wounded and one killed in grenade attacks by unknown assailants on opposition rallies on Friday and Sunday. The incidents heightened fears of growing unrest ahead of next month's election.

Labour Minister Chalerm Yubamrung, who will oversee the implementation of the emergency decree, said Thailand would abide by international standards

"We will not use force. We have no policy to disperse them (the protesters) and we haven't announced a curfew yet," he said.

The kingdom has been periodically rocked by political bloodshed since former prime minister Thaksin Shinawatra, Yingluck's older brother, was overthrown by royalist generals in a coup seven years ago.

The latest protests were triggered by a failed amnesty bill that could have allowed Thaksin to return without going to jail for a past corruption conviction.

The demonstrators accuse the billionaire telecoms tycoon-turned-politician of controlling his sister's government from his base in Dubai.

Thaksin has strong electoral support in northern Thailand, but he is reviled by many southerners, Bangkok's middle class and members of the royalist establishment.