The Christian Right Loves A Bully 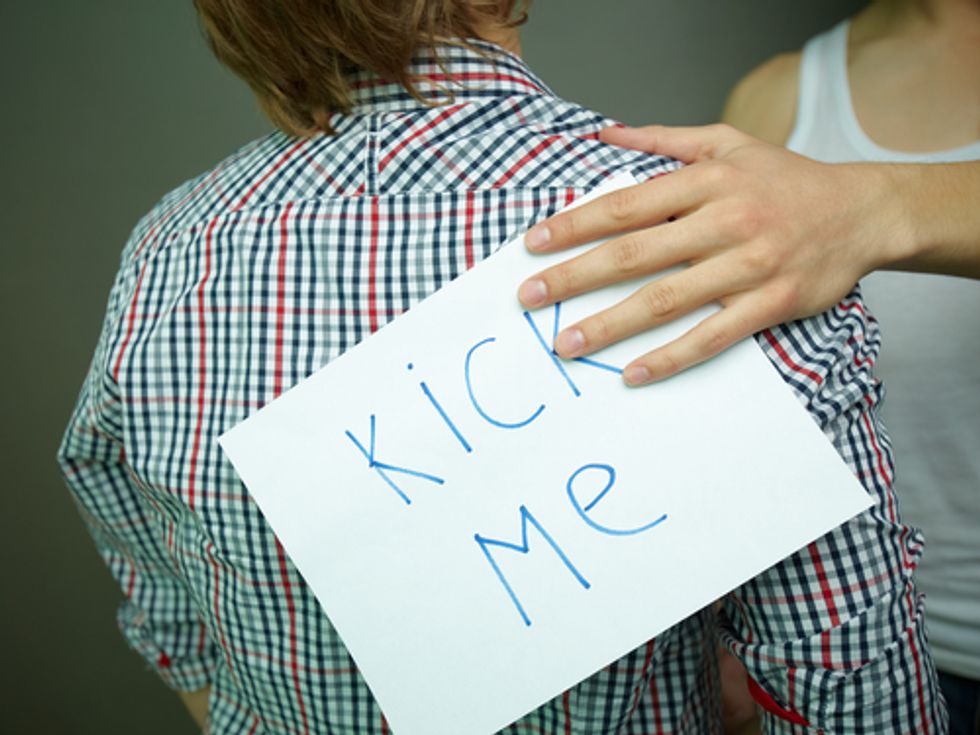 There's a strong tendency in the public discourse about bullying to assume that adults either are strongly against it or that they are, at worst, indifferent to it because they fail to take it seriously enough. There's very little discourse about how adults often encourage bullying and even benefit from it, probably in part because adults in authority at schools will adamantly deny the encouragement they offer bullies if confronted on it. But let's be clear: Teachers and other authority figures are often the instigators when it comes to bullying. The ACLU is suing a school district in Louisiana because the adults have deliberately employed bullying as a weapon to marginalize students who don't believe in Christianity. The plaintiff, Scott Lane, is suing because his stepson, who is Buddhist, has been subject to all sorts of abuse for not being a Christian, mostly at the hands of his teacher.

On a science test, their teacher had included a fill-in-the-blank question: "ISN'T IT AMAZING WHAT THE _____________ HAS MADE!!!!!!!!!!!!!!!!!!!!!!!!!!!!!!!!" When my stepson didn't know the answer ("Lord"), she belittled him in front of the entire class. When he wrote in "Lord Buddha" on another exam, she marked it wrong. As she was returning that exam to students, one student proclaimed aloud that "people are stupid if they think God is not real." In response, my stepson's teacher agreed, telling the class, "Yes! That is right! I had a student miss that on his test." The entire class broke out in laughter at my stepson.

The same teacher also told our children that the Bible is "100 percent true," that the Earth was created by God 6,000 years ago, and that evolution is "impossible" and a "stupid theory made up by stupid people who don't want to believe in God." She's also told the class that Buddhism is "stupid."

When they went to the school to complain, they found that the general environment at the school was one that encouraged this kind of Christian bullying. The school, for instance, is covered in Christian decorations.

Students are frequently led in prayer, and students are required to attend an annual "See You At The Pole" prayer event. Teachers routinely hand out Christian pamphlets that Lane describes as featuring "he entire New Testament of the Bible as well as cartoons that denounce evolution and trumpet the evils of birth control, premarital sex, rock music, alcohol, pornography, homosexuality, sorcery, and witchcraft." Needless to say, when he told the superintendent about his concerns about his stepson being routinely bullied and humiliated for being Buddhist, the superintendent "was dismissive and told us that we live in the 'Bible Belt' and that this is just how things are."

Obviously, Lane's stepson is a victim of all sorts of human rights violations here, starting with his freedom of religion. But this is also a good example of why we need to be skeptical when conservatives, particularly religious right conservatives, swear up and down that they oppose bullying. In a lot of states, the Christian right is actively trying to fight against anti-bullying legislation because, they claim, that it will be used unfairly to target Christians who are peacefully expressing their views, specifically on homosexuality. Or, as we saw with the arguments regarding the abortion clinic buffer zone, conservatives are pretending that the people who holler and scream at women trying to enter clinics are just sweethearts there to "counsel" women. (The lawsuit itself disproves that notion, because if you are indeed trying to be polite and loving, then you start by not trying to force an interaction with an unwilling person.) But, in reality, they oppose anti-bullying laws because, as this lawsuit shows, bullying is a weapon that the Christian right loves and does not want to give up.