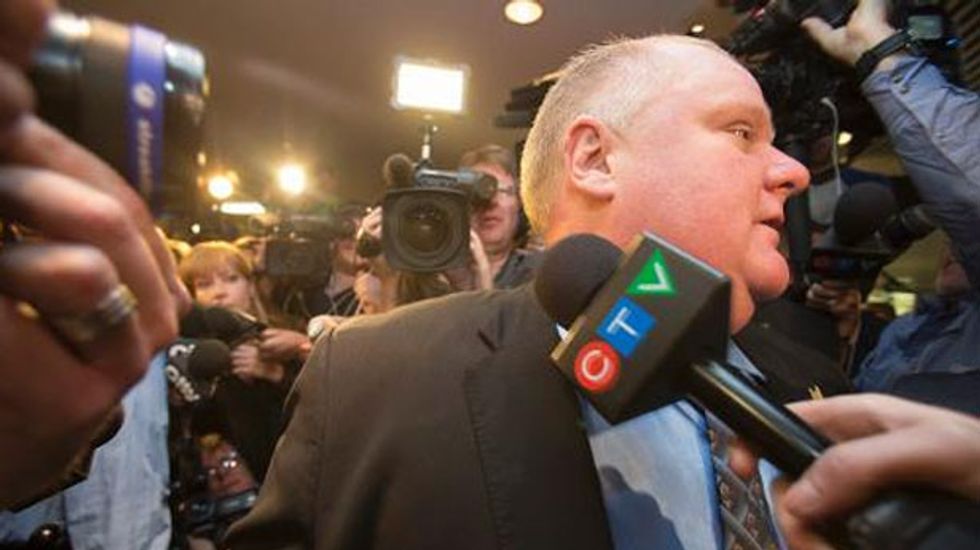 Toronto's larger-than-life mayor, Rob Ford, who was stripped of most of his powers in November after admitting he had smoked crack, launched his bid for re-election Thursday.

"Just filed my paperwork for the 2014 election. Vote on October 27th," Ford said on Twitter, alongside a picture of himself, brother Councillor Doug Ford and a city official looking over documents.

Ford has been mired in scandal since October, accused of unseemly behavior and sexual harassment during a series of drunken rampages in addition to his admitted crack use.

He denies the most serious charges, and has always insisted he would seek a second term as mayor of Toronto, North America's fourth largest city and Canada's commercial and financial hub.

Ford retains the title of mayor but, since a Toronto city council vote on November 18, the bulk of his powers and duties have been transferred to his deputy, Norm Kelly.

He has, however, remained a highly visible presence in the Ontario capital, and in late December was a media fixture as the city was paralyzed by a powerful ice storm.

A blackout hit more than 300,000 Toronto households for several days before Christmas, and Ford made a number of appearances in the poorer neighborhoods where he enjoys his strongest support.

Even as controversy dogs him, polls show Ford's support has dipped only slightly. A week after the crack admission, 42 percent of Toronto potential voters still held a favorable opinion of their mayor.

His support is especially strong among those whom pollsters described as poor, less educated, male, Catholics, those with children and those whose ancestry is other than British.

In the upcoming race, the conservative will face a challenge from transit committee chair Karen Stintz, another center right politician who announced her candidacy in October.

With just seven percent of those polled saying they intended to vote for her, she lags far behind the incumbent, who polls show would be supported by 31 percent of prospective voters.

The leading opposition candidate so far is leftist Olivia Chow, who is polling at around 34 percent even without officially announcing a run.

Originally from Hong Kong, Chow is the widow of Jack Layton, the former head of the opposition, who died in 2011.

Other possible candidates including conservative John Tory or Denzil Minnan-Wong, municipal council member and a strong opponent of Ford.