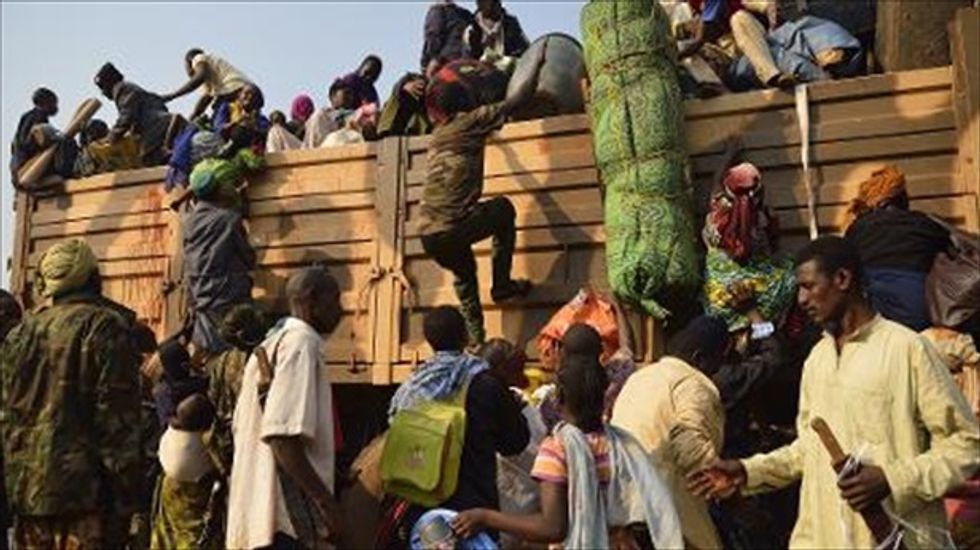 Chadian civilians climb on a military truck in the PK12 district of Bangui on Jan. 16, 2014 as they flee the Central African Republic [AFP]

Violence in the highly-unstable country has not let up despite the resignation last week of strongman Michel Djotodia under intense regional pressure, and at least seven more people were killed in the capital overnight.

The violence "has all the elements that we have seen elsewhere in places like Rwanda, Bosnia. The elements are there for a genocide, there is no question about that," UN humanitarian operations director John Ging told reporters in Geneva after a five-day visit to the country.

"Atrocities are being committed on an ongoing basis, (and) fear is consuming the minds of an entire population, wherever you might go," Ging said.

AFP reporters on Thursday saw the bodies of three people, including a teenage boy, killed by bullets in a city mosque, while the country's Red Cross office said it had collected the corpses of four men killed by machete.

Tension ran high in northern Bangui, where French troops patrolled in a bid to quell the unrest that spiralled between Muslim former rebels and the Christian majority in the wake of a coup that last year plunged the poor, landlocked country into chaos.

Some residents of the district accused French soldiers of shooting people during a search. "They fired at the three men," said a youth, pointing to spent shells.

The French army acknowledged that there had been a clash but denied any link with the deaths.

"At the end of yesterday afternoon we were challenged by unidentified armed elements. We fired back but there is no confirmation of the toll. The three dead have nothing to do with the clash," a military source said.

Panicked Muslim residents were fleeing, headed northwards for neighbouring Chad, a country unfamiliar to many of them. AFP journalists saw dozens of people packed into lorries accompanied by Chadian troops from a regional African force named MISCA.

Women in tears and terrified children even scrambled to get aboard moving vehicles, some of them wounded by Christian "anti-balaka" militias formed in response to atrocities by armed Muslims.

"We're being massacred here. I've suffered too much. I'm going," said Sadou Gambo, a widow with six children and no relatives in Chad.

Members of the transitional national council (CNT), serving as a provisional parliament, on Thursday agreed on 17 criteria to run for interim leader, and said the election would take place on Monday at 1000 GMT.

"The council has an historic opportunity to put the country on a path toward stability, democracy, and development, and we encourage the council to seize this opportunity by selecting leaders of integrity who can restore stability to the Central African Republic," US deputy State Department spokeswoman Marie Harf said on Wednesday.

But the UN's Ging warned of the scale of the task. "Politically the country has collapsed, public services have also collapsed, whether it's health care, education, social services and so on," he said.

He said that the bloodshed did not yet amount to an interreligious conflict between communities that had long lived in peace side by side, "but it has the potential."

"This conflict (was initiated) by extremely violent people who have an agenda to try to convert this into an interreligious conflict. The communities are resisting that but they are in fear," he added.

About a fifth of the population of 4.6 million has been displaced or fled abroad to escape murder, rape and pillage, according to UN agencies.

Some 100,000 people from Bangui survive in an overcrowded tent city by the airport, where 1,600 French troops are based alongside the MISCA soldiers.

One task of these forces is to disarm the armed gangs and provide security. On Wednesday, the African Union urged central African countries to strengthen the MISCA force from less than 4,000 to 6,000.

Relief agencies have warned of a humanitarian disaster and are making efforts to feed people, help run crowded hospitals and provide vaccination for measles, which can be deadly when hygiene is lacking.