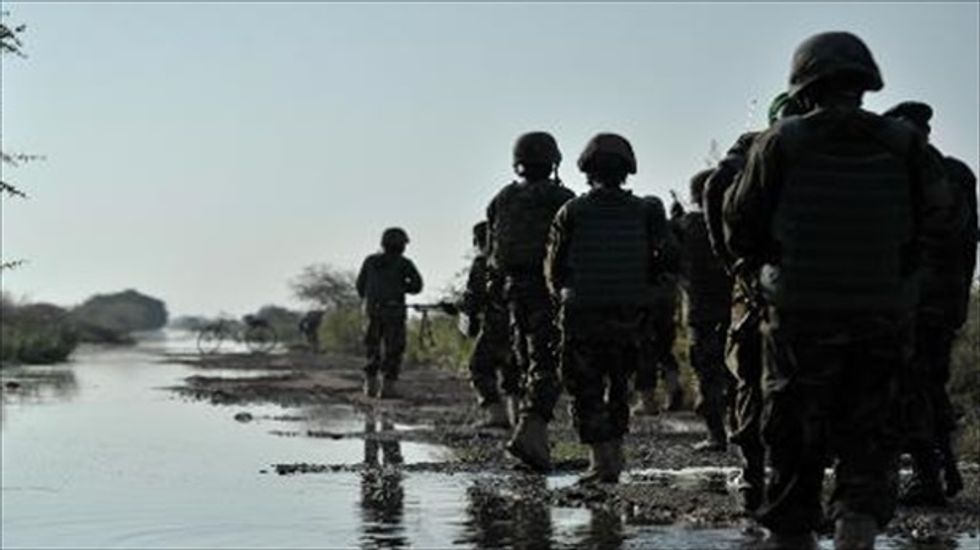 The United States has sent a handful of military advisers to Somalia in recent months to help bolster an African Union force fighting Islamist militants there, officials said Friday.

The deployment marks the first stationing of US troops in the troubled country since 1993, when two Blackhawk helicopters were shot down and 18 Americans were killed in a disastrous operation.

"The US has established a military coordination cell in Somalia to provide planning and advisory support to the African Union Mission in Somalia (AMISOM) and Somali security forces to increase their capabilities and promote peace and security throughout Somalia and the region," US Africa Command spokesman Colonel Tom Davis said in a statement.

The small team, which was launched in October and became fully operational last month, numbers "fewer than five" troops, a defense official told AFP on condition of anonymity.

The troops will be based at Mogadishu airport, working alongside the AU mission to confront resurgent extremist militants, the official said, confirming the previously undisclosed deployment.

The African Union mission supports Somali government forces, which have rolled back Shebab fighters out of key cities over the past 18 months.

The US move comes as Washington steps up military assistance across Africa amid growing concern over Al-Qaeda-linked militants in Libya, Mali, Somalia and other countries.

The Pentagon has provided cargo aircraft and intelligence to French forces battling Islamists in Mali and uses airfields in Djibouti, Ethiopia and elsewhere to fly US drone aircraft.

In October, Navy SEAL commandos carried out a raid on the seaside home of a Shebab militant but the operation had to be aborted and the operative was not captured.

Although the Shebab militia has suffered battlefield setbacks in Somalia, it has orchestrated a number of attacks in other East African countries, including a bloody four-day siege of a shopping center in Nairobi in September that killed dozens.

The UN Security Council in November approved an increase of 4,400 troops to the African Union mission in Somalia, expanding it from 17,700 to more than 22,100. The force is comprised of troops from Burundi, Djibouti, Kenya, Sierra Leone and Uganda.

For the United States, the deployment of a handful of advisers reflects a gradual shift in approach as previously any boots on the ground were considered out of the question given the 1993 debacle in Somalia, which later became the subject of a best-selling book and film, "Blackhawk Down."

In the operation 20 years ago, US Army Rangers and special forces set out to capture two deputies of warlord Mohamed Farrah Aidid but two Blackhawk helicopters were downed by rocket-propelled grenades. Efforts to recover the crews and aircraft turned into an hours-long urban battle with insurgents that left 18 Americans dead.

Disturbing video of militants dragging American corpses through the streets had a major political effect in the United States, serving as a cautionary tale against intervening in conflicts abroad.