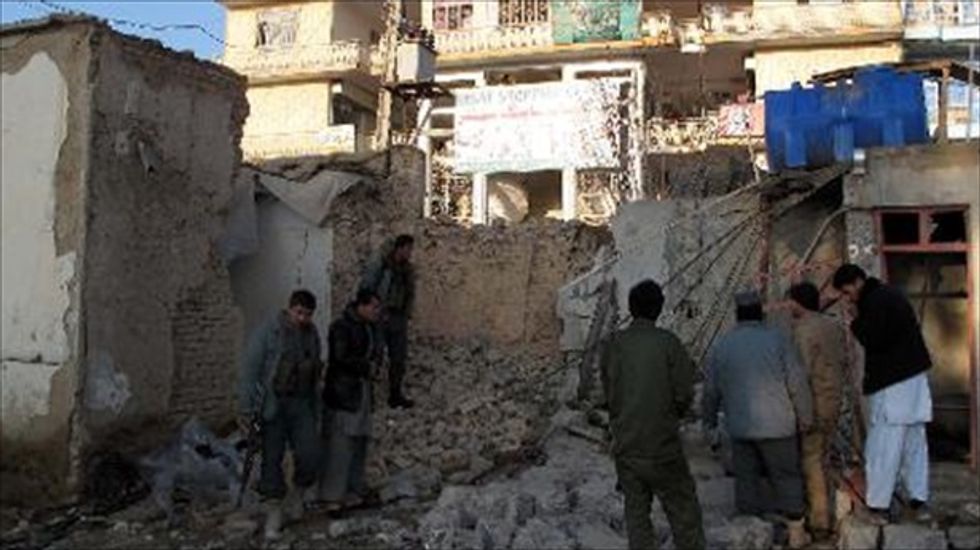 Afghan policemen check the site of a suicide attack in Lashkar Gah in Helmand province, on Jan. 10, 2014 [AFP]

Afghan President Hamid Karzai on Friday condemned US troops for killing a four-year-old boy in the southern province of Helmand, in a fresh strain to troubled relations between Washington and Kabul.

Helmand governor Naeem Baloch told Karzai during a meeting in Kabul about the shooting, which comes as the US and Afghanistan wrangle over a deal to allow some US troops to remain in the country after this year.

The US-led NATO coalition in Afghanistan issued a statement expressing "deepest sympathies to the family who suffered the loss of a loved one" in the incident on Wednesday and vowing to investigate "what happened and why".

Relations between Washington and Kabul have been poor for years, and negotiations over the bilateral security agreement (BSA) have erupted into a long-running public dispute.

Karzai made a surprise decision not to sign the agreement promptly despite having vowed to do so, leading to the threat of a complete withdrawal of NATO troops by the end of 2014.

"We condemn the killing of this boy in the strongest terms," presidential spokesman Aimal Faizi told AFP.

"We have been calling for the complete end of military operations in residential areas. This demand has not been taken seriously by foreign troops and the result is civilian casualties including women and children."

Addressing a regular briefing, US State Department spokeswoman Jen Psaki said: "Obviously we would regret any casualties, any loss of life if these reports are accurate."

Civilian casualties have been one of the most sensitive issues of the 13-year military intervention in Afghanistan, and Karzai has often used accidental shootings and misguided airstrikes to berate foreign countries and stir public anger.

Faizi said a ban on military operations in civilian areas was one of the Afghan conditions of signing the BSA.

"The ball is the US court," he said. "We are waiting for practical steps to be taken to end these operations and for the launch of a peace process. We believe the US can deliver on these demands."

Signing the BSA is a precondition for the delivery of billions of dollars in Western aid for Afghanistan, which will hold an election to choose Karzai's successor in April.

In a classified cable reported by the Washington Post this week, US Ambassador James Cunningham said he did not expect Karzai to agree to sign the document before the vote.

The BSA would see several thousand US troops remain in Afghanistan to provide training in the fight against Taliban insurgents after the NATO combat mission ends in December.

"Our position continues to be that if we cannot conclude a BSA promptly, then we will initiate planning for a post-2014 future in which there would be no US or NATO troop presence in Afghanistan," Psaki told reporters Friday.

"We recognise that at this time it is up to President Karzai to determine what is in Afghanistan's best interest, and we continue to work on the ground with President Karzai and his team on encouraging them to sign the BSA."

Afghanistan's army and police have developed rapidly in the last four years, but the country risks slipping into turmoil without foreign military assistance as Islamist militias and warlords vie for power.

In a separate move this week, Afghanistan said it would release scores of alleged Taliban fighters from jail as there was no evidence against them, despite US objections that the men could return to the battlefield.