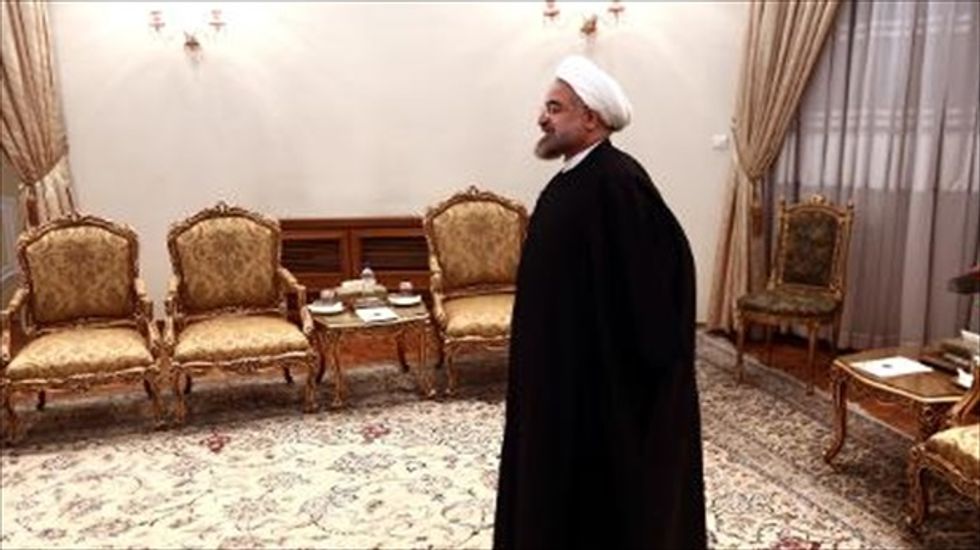 Iranian President Hassan Rouhani waits for a meeting in Tehran on Dec. 11, 2013 [AFP]

The White House released a summary of the implementation deal that accompanies a six-month interim nuclear agreement with Iran on Thursday, to ease pressure from domestic opponents of the pact.

It also contains a payment schedule for nearly $7 billion in blocked Iranian foreign exchange holdings, a modest easing of sanctions in return for a freeze on some parts of the Iranian nuclear program.

Most of the data in the public document had been made available previously in various press briefings after the deal was reached last year and after implementation terms were agreed at talks in Geneva last week.

The full text was made available to restricted audience of lawmakers and aides in Congress, White House spokesman Jay Carney said.

The move came after US officials were forced to deny claims that there was a secret side deal accompanying the interim nuclear pact reached in Geneva last year.

"Today we provided Congress with the document containing the technical understandings related to the implementation of the Joint Plan of Action," Carney said.

The IAEA wants to keep certain aspects of the deal confidential, Carney said.

Opponents of the interim nuclear deal between the P5+1 group of powers and Iran warn that it gave up too much to Iran in return for too limited commitments to slow its nuclear activity.

The White House is battling hawkish senators from the Republican and Democratic parties who want to slap new sanctions on Iran despite warnings from Obama that they could force Tehran to walk away from talks on a permanent agreement.

The interim deal, meant to buy time for detailed negotiations on thwarting what the West sees as Tehran’s drive for nuclear weapons, will go into force on January 20.

"With this implementation plan, we have made concrete progress," the White House said in its summary of the document.

"We will now focus on the critical work of pursuing a comprehensive resolution that addresses our concerns over Iran’s nuclear program."

The summary was released amid rising speculation that Secretary of State John Kerry could meet Iranian President Hassan Rouhani at the World Economic Forum in Davos next week.

State Department spokeswoman Jen Psaki said there were no meetings so far to announce but noted Kerry would be in the Swiss resort at the same time as "a number of Iranian officials."

The summary confirmed that, under the deal, Iran would halt production of near 20 percent uranium and start to dilute the uranium stockpile it already has.

The Natanz and Fordow sites will now be subject to daily IAEA access as opposed to every few weeks. Its Arak reactor will be subject to monthly IAEA inspections.

Some sanctions relief will be available to Iran on the very first day of the accord.

Once IAEA verification has taken place, the P5+1 will start taking steps to ease the sanctions straitjacket on Iran more broadly.