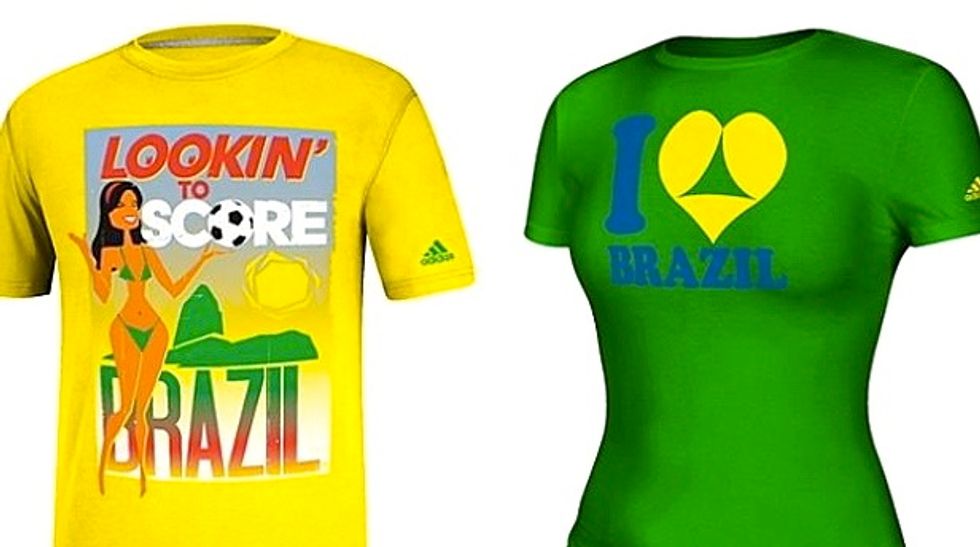 That's the message emblazoned on Adidas t-shirts the company sold in the U.S. in advance of the World Cup later this year, drawing the ire of Brazilian officials who have worked assiduously to shed the country's image of a sex tourist's nirvana.

"Embratur strongly repudiates the sale of products that link Brazil's image to sexual appeal," the Brazilian tourism board said in a statement. "Such an attitude indirectly contributes to committing crimes such as sexual child and adolescent exploitation."

Embratur is the state agency charged with promoting and marketing the country abroad.

The German-based Adidas withdrew the shirts after an outcry in Brazil, which is sensitive to its reputation of being a sex tourist destination. The first displayed a bikini-clad woman of impossibly thin proportions with the words "Looking to Score: Brazil" over a Rio de Janeiro backdrop; the second purported to be an abstract image of woman's buttocks drawn tightly in a thong.

“We don’t accept that the World Cup be used for illegal practices, like so-called sexual tourism,” Embratur's Flávio Dino told the Brazilian news agency O Globo before the shirts were recalled. “We ask that Adidas put a stop to the sale of these products… Brazil has harsh laws to deal with sexual abuse and the police will act on these cases in the national territory.”

The country's ministry of women's affairs was especially incensed: "This is all the more shocking in a country that just elected a women as its highest authority, which brought greater respect for women and zero tolerance for any form of violence against them," a statement said.

Adidas had little to say after recalling the shirts, which were sold only in the United States. In its statement announcing their removal, the firm said, "Adidas always pays close attention to the opinion of its consumers and partners" and "it is announcing that these products will not be sold anymore."

Brazilian president Dilma Rousseff responded to the shirts on Twitter. "Brazil is happy to receive tourists for the World Cup, but it is also ready to combat sex tourism," she tweeted. She also included the number of a hotline to report cases of sexual exploitation.

Rousseff, elected in 2010, is the country's first female president.

The website Uproxx.com made fun of the shirts on Tuesday with a post titled, "These New Adidas World Cup Shirts Will Finally Let The World Know How Much You A$s Brazil."