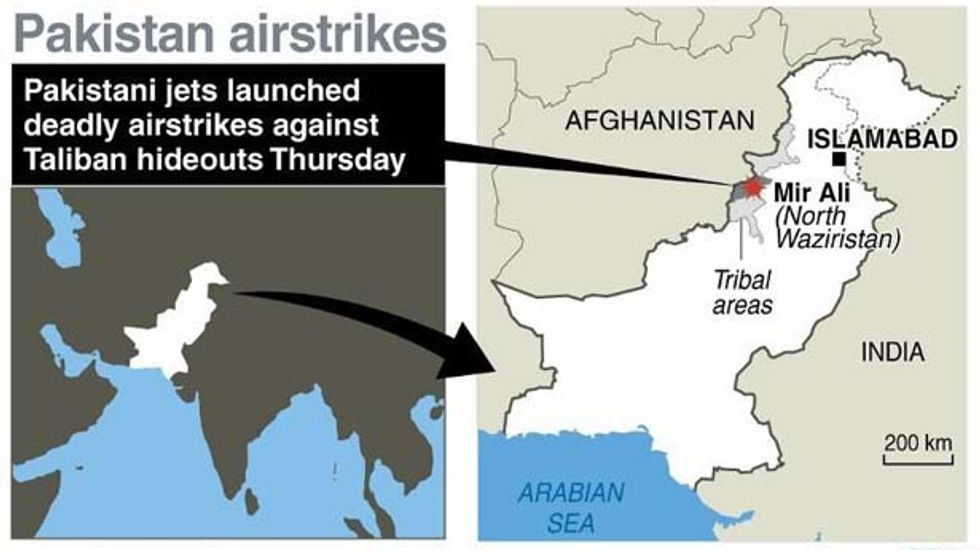 Pakistani jets launched multiple strikes on Taliban holdouts in the northwest on Thursday, killing at least 15 in retaliation for a string of attacks by the militants which has derailed peace talks.

The first strike confirmed by security officials came early Thursday when jets bombed several locations including a compound in the town of Mir Ali and surrounding areas of North Waziristan.

"There are confirmed reports of 15 militants including foreigners killed in these airstrikes," a senior security official told AFP on condition of anonymity.

A second targeted militants hiding in the Khyber tribal district who are suspected of bombing a cinema in Peshawar last week and killing an army major on Tuesday, a second security official said.

The twin strikes and spiralling violence leaves a troubled peace process between the government and the insurgents in further doubt just three weeks after talks began.

The Pakistan Tehreek-e-Taliban (TTP) had offered a ceasefire on Wednesday on condition that government forces stopped killing and arresting their members.

Pakistan's Prime Minister Nawaz Sharif announced the start of talks on January 29 to "give peace another chance" following a seven-year insurgency that has claimed nearly 7,000 lives.

But after several rounds of talks, government mediators pulled out of scheduled dialogue with their Taliban counterparts on Monday amid outrage over the execution of 23 kidnapped soldiers.

On Sunday, a faction of the Islamist movement from Mohmand near the Afghan border said they had executed the soldiers who were seized in the area in June 2010.

Despite the new bloodshed, Professor Ibrahim Khan, a Taliban peace negotiator, told AFP Thursday that the chance of a settlement remained alive.

"The bad effects are very visible but even then we will continue our struggle for the establishment of peace," he told AFP. "Negotiations are the only way. There is no other way."

A total of 93 people have been killed since the reconciliation effort was launched at the end of January, including the kidnapped soldiers, according to an AFP tally.

The Taliban say 60 of their members have died before Thursday's strikes and the group has accused the army of executing its members in custody.

"Air strikes were carried out to target militant hideouts with precision," a security official said Thursday about the first raids in North Waziristan.

"A huge cache of arms and ammunition has also been destroyed."

Another security official told AFP on condition of anonymity that Thursday's strikes were "in retaliation for recent Taliban attacks".

As well as the execution of the kidnapped soldiers and other killings, the insurgents have claimed a car bomb attack on a police bus in Karachi on February 13 in which 12 officers died.

The government has demanded a ceasefire as a condition to resume the peace talks.

A third security official in Miranshah, the main town of North Waziristan, told AFP that jet fighters began pounding targets around 12:30 am, with the attack continuing for more than an hour.

Residents in the area, known as a hideout for Taliban and Al-Qaeda members, said the compound caught fire after the attack and many local people were moving to safer areas.

The second strike in Khyber also targeted militants and destroyed "prepared explosives and IEDs (improvised explosive devices)", said a security source who did not give a death toll.

The TTP has been waging a bloody campaign against the Pakistani state since 2007, carrying out a number of bomb and gun attacks, often on military targets.

Some observers have raised doubts about the ability of the central Taliban command to control all factions, including some opposed to peace negotiations.

The Taliban's demands also include the nationwide imposition of sharia law, an end to US drone strikes and the withdrawal of the army from northwestern tribal regions -- conditions unlikely to be met.