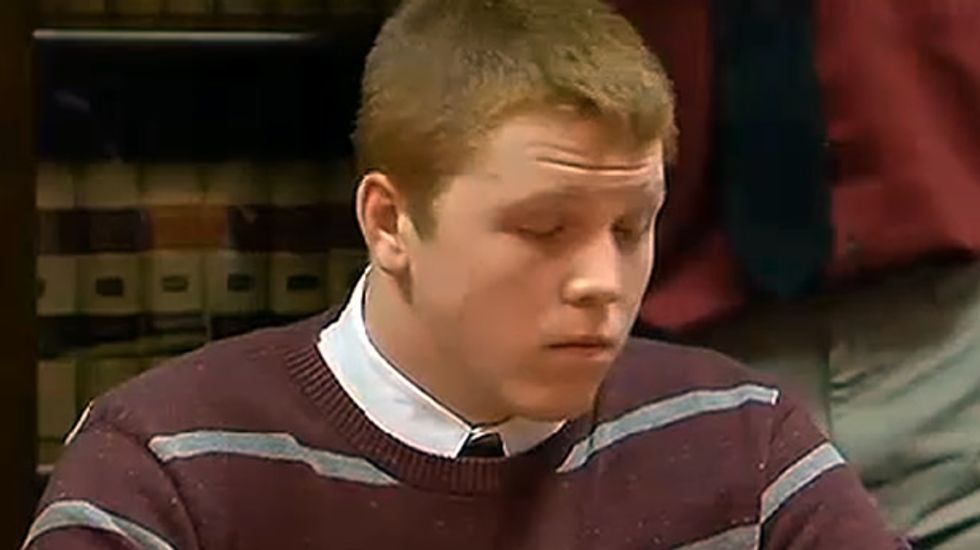 Eight members of a Phillipsburgh, New Jersey high school wrestling team were banned from the state tournament and suspended for three days each after a photograph of them "lynching" a black wrestling dummy wearing a rival school's t-shirt.

The students, who are white, surrounded the black wrestling dummy dressed in a Paulsboro High School t-shirt. According to the 2010 census, 36.7 percent of residents of Paulsboro, New Jersey are African-American, compared to only 7.5 percent of Phillipsburgh.

Attorney Scott Wilhelm, speaking on behalf of the students, said that "[w]hen we spontaneously set the scene and posed for the photograph, our sole purpose was to promote school spirit and portray our wrestling team as victor over two of our archrivals -- Paulsboro High School and Kittatinny High School, and not for any other purpose."

Wilhelm insisted that the dummy was not meant to represent a person of any particular race: "The inanimate figure in the photograph is a wrestling dummy, which is owned by the Phillipsburg High School, and is used in our daily practices, and is used by most high school wrestling teams."

"It is our understanding," Wilhelm said, "that the dummies are manufactured in only dark leather. In outfitting the wrestling dummy, we did not give any thought to the physical appearance of the dummy as anything other than an unidentified, generic wrestler – clothed in a Paulsboro T-shirt over a Kittatinny [High School] singlet. Likewise, our dress was standard wrestling uniforms, and our poses were not premeditated, but rather, spontaneous gestures without any forethought."

According to Wilhelm, the students' minds were "clouded" by their recent success in a tournament, but now understand that others may have found their celebration offensive, "however innocently intended."

One Paulsboro wrestler, Zach Richard, told a CBS 2 reporter that there was nothing "innocent" about it, saying "I think they knew what they was doing."

The Executive Director of the New Jersey State Interscholastic Athletic Association (NJSIAA), Steven Timko, said that the photograph "violates the principles of good sportsmanship and is a flagrant violation of the NJSIAA Sportsmanship Rule." It demonstrated a "fundamental disrespect" for opponents and used "violent imagery that has no place in high school sports."

Watch a report on the incident from CBS 2 below.