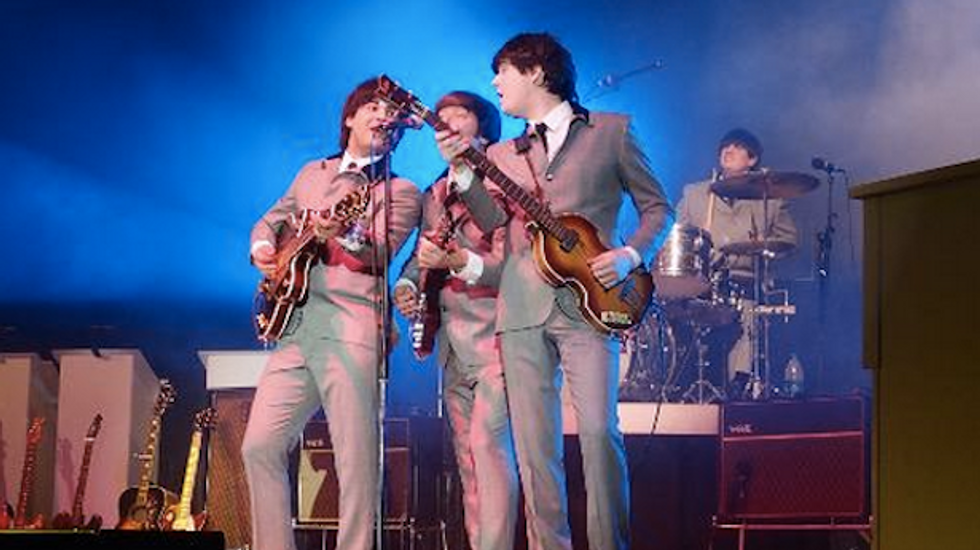 Beatlemania returned to Washington on Tuesday when the Fab Four's earliest hits once again echoed through the venue where they played their first concert on U.S. soil 50 years earlier.

Instead of screaming teenagers, the rather more adult sell-out crowd of 3,000 at the old Washington Coliseum initially opted to remain seated and sing along to Beatles classics such as "I Saw Her Standing There."

But they sprung to their feet and erupted in dance at the opening chords of "I Want to Hold Your Hand" as a tribute band, Beatlemania Now, in moptop haircuts and sharp 1960s suits, ran through the original 12-song, 35-minute set.

"I got a real seat this time! A front-row seat!" exclaimed Naomi Banks, who lived all her life by the Coliseum and saw the February 11, 1964 show from a balcony.

"There's a great energy in here. I feel I'm 16 instead of 66," Banks told AFP during an intermission, after which Beatlemania Now returned in full Sergeant Pepper regalia to play some later Beatles numbers.

"I was from this era. This is fantastic," said Alan Bradford, 62, a retiree from a Washington suburb who recalled his own rock band covering Beatles songs back when he was in high school.

More than 8,000 predominantly teenage girls packed the Coliseum -- then an ice rink and boxing arena -- for the original show, two days after the Beatles made their historic debut on CBS television's "The Ed Sullivan Show."

Tuesday's show -- a fund-raiser for the DC Preservation League before the Coliseum is converted into retail and office space -- featured elements unthinkable a half-century ago.

There was wine and beer for sale, along with hot chocolate for $5 and food trucks along the sidewalk outside, serving Peruvian, Vietnamese and other ethnic cuisine.

In the crowd, a young woman in a fashionable long coat snuck around, like a James Bond accomplice, recording everything with a pair of Google Glass.

On stage, smiling sign-language interpreters gestured enthusiastically to a contingent from nearby Gallaudet University, a world-renowned college for deaf and hard-of-hearing students.

Washington has a special place in Beatles history.

It was here that Marsha Albert, a suburban high-school student who'd seen a TV news report about the Beatles, wrote to local radio station WWDC asking for it to start playing Beatles music. The Beatles at that point were a phenomenon in their native Britain.

But their music had yet to be released in America, where Capitol Records, the U.S. arm of their British label EMI, thought their style -- derived, as it happened, from 1950s American rock and Motown soul -- was unsuitable for American ears.

So WWDC disc jockey Carroll James got a flight attendant to hand-carry a copy of "I Want to Hold Your Hand" back from London.

He then played it on-air over and over, prompting other DJs in other cities to follow suit -- and forcing Capitol to finally start putting out Beatles singles, which immediately raced to the top of the pop music charts.

Sixties rocker Tommy Roe opened Tuesday's concert, just as he did 50 years before, playing his then-hits "Sheila" and "Everybody" and reminiscing with the crowd.

"We're here for a very good reason," he said at one point.