Bloodiest day since Soviet times: At least 67 killed in Kiev as riot police fire on protesters 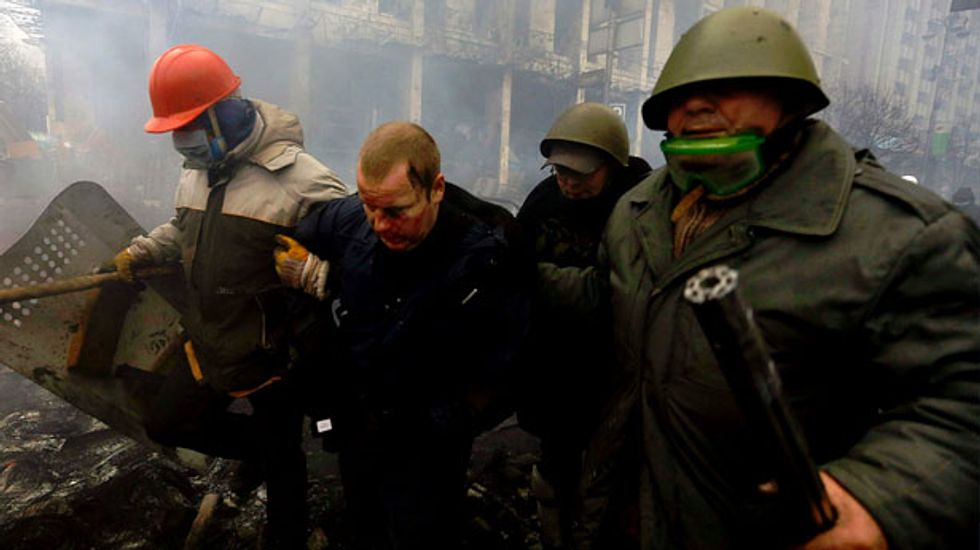 By Richard Balmforth and Alessandra Prentice

Three hours of fierce fighting in Independence Square, which was recaptured by anti-government protesters, left the bodies of over 20 civilians strewn on the ground, a few hundred meters from where the president met the EU delegation.

Riot police were captured on video shooting from a rooftop at demonstrators in the plaza, known as the Maidan or "Euro-Maidan". Protesters hurled petrol bombs and paving stones to drive the security forces off a corner of the square the police had captured in battles that began on two days earlier.

Kiev's city health department said 67 people had been killed since Tuesday, which meant at least 39 died in Thursday's clashes. That was by far the worst violence since Ukraine emerged from the crumbling Soviet Union 22 years ago.

The foreign ministers of Germany, France and Poland met for a marathon four hours with Yanukovich and extended their stay to put a roadmap for a political solution to opposition leaders. Diplomatic sources familiar with the discussions said it involved a temporary government until fresh elections.

"About to start a meeting with the opposition so as to test proposed agreement," tweeted Polish minister Radoslaw Sikorski.

Meanwhile their EU colleagues agreed at an emergency meeting in Brussels to move ahead with visa bans and asset freezes on those deemed responsible for the violence, Italian Foreign Minister Emma Bonino said.

In a sign of dwindling support for Yanukovich, his hand-picked head of Kiev's city administration quit the ruling party in protest at bloodshed in the streets.

Interior Minister Vitaly Zakharchenko, wearing camouflage as he made a televised statement, said police had been issued with combat weapons and would use them "in accordance with the law" to defend themselves - or to free 67 of their colleagues his ministry said were being held captive.

Russia criticized the European and U.S. actions, calling them "blackmail" that would only make matters worse. President Vladimir Putin dispatched an envoy to Kiev to join the mediation effort with the opposition at Yanukovich's request.

Ukraine is caught in a geopolitical tug-of-war between Moscow - which sees it as a market and ally and fears protests spreading to Russia - and the West, which says Ukrainians should be free to choose economic integration with the EU.

Raising pressure on Yanukovich to restore order if he wants another desperately needed loan, Russian Prime Minister Dmitry Medvedev said Moscow would not hand over cash to a leadership that let opponents walk over it "like a doormat".

German Chancellor Angela Merkel called Yanukovich to urge him to accept the offer of EU mediation in the crisis.

Thursday morning's bloodshed, in which both sides used firearms, traumatized many Ukrainians, whose 2004-05 Orange Revolution for democracy passed off largely peacefully.

It heightened concern voiced by Polish Prime Minister Donald Tusk that Ukraine could descend into civil war or split between the pro-European west and Russian-speaking east.

Video of the clashes on the edge of the Kiev square showed "Berkut" riot policemen firing bursts from automatic rifles on the run as they covered retreating colleagues fleeing past a nearby arts centre just off the plaza. An opposition militant in a helmet was filmed firing from behind a tree.

Other protesters used police riot shields for cover, while some fell wounded as the protest camp became a killing zone. A presidential statement said dozens of police were wounded or killed during the opposition offensive, hours after Yanukovich and opposition leaders had agreed on a truce.

The interior ministry's website advised citizens to avoid central Kiev because of the danger from "armed and aggressive individuals". Schools, restaurants and many shops in the normally bustling city of 3 million were closed, the metro was shut down and bank machines were running out of cash.

A statement from Yanukovich's office said organized gangs of protesters were using firearms, including sniper rifles.

Opposition leader Vitaly Klitschko urged lawmakers to convene in parliament and demanded Yanukovich call an immediate presidential election. "Today is a crucial day," the former boxing world champion said. "The authorities are resorting to bloody provocations in full view of the world."

Legislators gathered in parliament, near the main square, but it was not clear any significant decisions could be taken.

Wounded protesters were given first-aid treatment in the lobby of the Ukraine Hotel, where many foreign correspondents are staying. Reporters said there were bullet holes in the walls and windows of the hotel overlooking the square.

The crisis in the sprawling country of 46 million with an ailing economy and endemic corruption has mounted since Yanukovich took a $15-billion Russian bailout instead of signing a wide-ranging trade and cooperation deal with the EU.

Russia has held back a new loan installment until it sees stability in Kiev and has condemned EU and U.S. support of the opposition demands that Yanukovich, elected in a broadly fair vote in 2010, should share power and hold new elections.

The United States stepped up pressure on Wednesday by imposing travel bans on 20 senior Ukrainian officials.

"Our approach in the United States is not to see these as some Cold War chessboard in which we're in competition with Russia," U.S. President Barack Obama said after a North American summit in Mexico on Wednesday.

Some members of Ukraine's team decided to leave Russia's Winter Olympics in Sochi because of the violence back home, the International Olympic Committee said.

In Lviv, a bastion of Ukrainian nationalism since Soviet times, the regional assembly declared autonomy from Yanukovich and his administration, which many west Ukrainians see as much closer to Moscow and to Ukraine's Russian-speaking east.

Yanukovich, who replaced the head of the armed forces, has denounced the bloodshed as an attempted coup. EU officials said the Ukrainian leader would be left off the sanctions list for now to keep channels of dialogue open.

Diplomats said the threat of sanctions could also target assets held in the West by Ukrainian business oligarchs who have either backed Yanukovich or are sitting on the fence.

Ukraine's hryvnia currency, flirting with its lowest levels since the global financial crisis five years ago, weakened again on Thursday.

Possibly due to the risk of sanctions, three of Ukraine's richest magnates have stepped up pressure on Yanukovich to hold back from using force: "There are no circumstances which justify the use of force toward the peaceful population," said steel and coal "oligarch" Rinat Akhmetov, who bankrolled Yanukovich's 2010 election campaign.