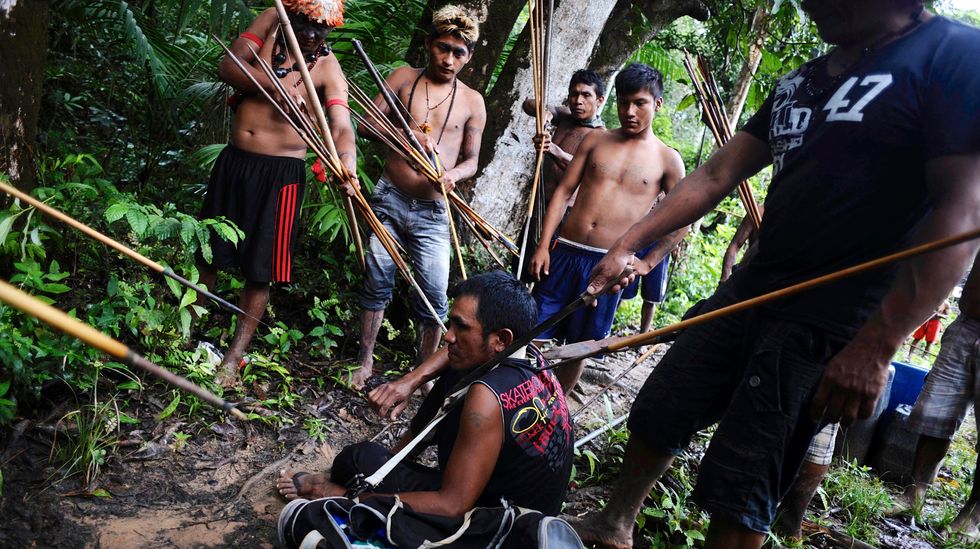 Munduruku Indian warriors stand guard over an illegal gold miner who was detained by a group of warriors searching out illegal gold mines and miners in their territory near the Caburua river, a tributary of the Tapajos and Amazon rivers in western Para state January 20, 2014. REUTERS/Lunae Parracho

As Brazil struggles to solve land disputes between Indians and farmers on the expanding frontier of its agricultural heartland, more tensions over forest and mineral resources are brewing in the remote Amazon.

The government of President Dilma Rousseff gave eviction notices to hundreds of non-Indian families in the Awá-Guajá reserve in Maranhão state in January and plans to relocate them by April, with the help of the army if necessary, Indian affairs agency Funai says.

The court order to clear the Awá territory follows the forced removal of some 7,000 soy farmers and cattle ranchers from the Marãiwatsédé Xavante reservation last year, a process profiled by Reuters that resulted in violent clashes.

Anthropologists say evictions from Awá territory could be even more complicated. It is thought to be a base for criminal logging operations and is also home to some indigenous families who have never had contact with outsiders, a combination that worries human rights groups lobbying for the evictions.

The government missed a federal judge's deadline to start carrying out the evictions last year but began ordering them after a high-profile campaign backed by the likes of actor Colin Firth.

Now, other tribes from the Amazon as well as the long-settled soy belt are lobbying to have non-Indians removed from their lands or have new reservations created at the same time Rousseff's leftist government, faced with a sputtering economy in an election year, is trying to build dams, expand farmland and otherwise spur growth.

South America's largest country is still grappling with unresolved indigenous land issues more than a century after the United States finished carving out Indian reservations and has become one of the world's clearest examples of the conflict between preserving indigenous culture and promoting economic development.

"The Indians are showing ever increasing persistence in asserting their rights, which will likely increase conflicts with outsiders interested in their lands," said Rubem Almeida, a Brazilian anthropologist.

The federal government says it is strictly following the law and is taking pains to relocate non-Indian settlers when it removes them from indigenous territories. Each conflict is unique and requires a different approach, said Paulo Maldos, a senior presidential aide who works on social policy.

"The only thing they have in common is the constitution, which says we must demarcate Indian territory and that land titles inside indigenous land are null," he said.

"The Indians know where their lands are and are never going to stop trying to return to them; they have a very special relationship with the land."

Take the Munduruku tribe in western Pará, a vast Amazon state that stretches to Brazil's coast and is more than twice the size of France.

Their more than 2 million-hectare (4.9 million-acre) slice of protected rain forest is being encroached on by efforts to dam the Tapajós river, build new roads for exporting soy and corn crops, and especially by wildcat miners in search of gold.

The tribe's leaders, who refer to themselves as warriors, traveled to the capital Brasilia last year to demand that the federal government remove non-indigenous miners from their territory.

Rather than wait for a court decision to start the process, which took years for the Xavante and Awá, the Munduruku decided to take matters into their own hands and expel the wildcat miners in January.

Miners operating without government licenses independent of large companies are common in both the Brazilian and Peruvian Amazon. They are known for using high levels of mercury that pollute local water sources.

A group of 70 Munduruku were about to dismantle a fifth wildcat mine by sneaking up on the outposts on boats they said were supplied by Funai when Reuters visited them in mid-January. Armed with bows and arrows, they outnumbered the miners and were able to take over without anyone being hurt - this time.

The Munduruku have not yet decided what to do with the mining equipment they confiscated.

"The machinery will be idle for a month," Chief Paigomuyatpu Manhuary said. "After that, the people will decide whether we close the mine or work the ones in places where the jungle has already been cleared, for the benefit of the community."

Tribal leaders also plan to resist the construction of the Teles Pires and Tapajós hydroelectric dams in Mato Grosso and Pará states. They have previously joined other tribes in protesting Belo Monte, which will be the world's third-largest dam and flood large swaths of the Amazon once complete.

The government says indigenous groups are consulted before energy projects that affect them are built, in accordance with international law.

The Munduruku are sometimes called upon to do heavy labor for the miners, known as garimpeiros, in exchange for food, a small amount of gold or small sums of money, tribe members told Reuters. They also fear they may already be the targets of hired hit men.

Indians across Brazil say non-indigenous presence in their territories threatens their safety and unique culture, both of which are supposedly protected in the constitution. The farm lobby in Congress wants to amend the constitution to limit the amount of land that can be reserved for indigenous people.

The constitution, written in 1988 shortly after Brazil emerged from a military dictatorship, enshrined the Indians' right to "the lands they traditionally occupy," and said the state is responsible for "demarcating them, protecting and ensuring respect of their property."

The Munduruku's fears echo those of the Guarani-Kaiowá Indians 2,000 km (1,240 miles) away in Mato Grosso do Sul state. They say they often receive death threats from ranchers and that they have been denied access to their ancestral territory, which is also occupied by sugar cane plantations.

The cattle ranchers have argued that they must protect private property from invading Indians who claim the land as ancestral. In Mato Grosso do Sul, many ranchers have legitimate titles on lands that overlap with Indian territory. The government has said it is trying to buy some of the properties at the center of the conflict.

Last month, a local court ordered private security firm Gaspem to be shut done on the grounds it was really a front for hit men hired by ranchers to kill Indians. Public prosecutors called Gaspem a "heavily armed group of brutal vigilantes." But many are skeptical that shutting it down will end the violence.

"The conflict will not end until the government finds a solution to the Guarani land problem," said Almeida, the anthropologist.