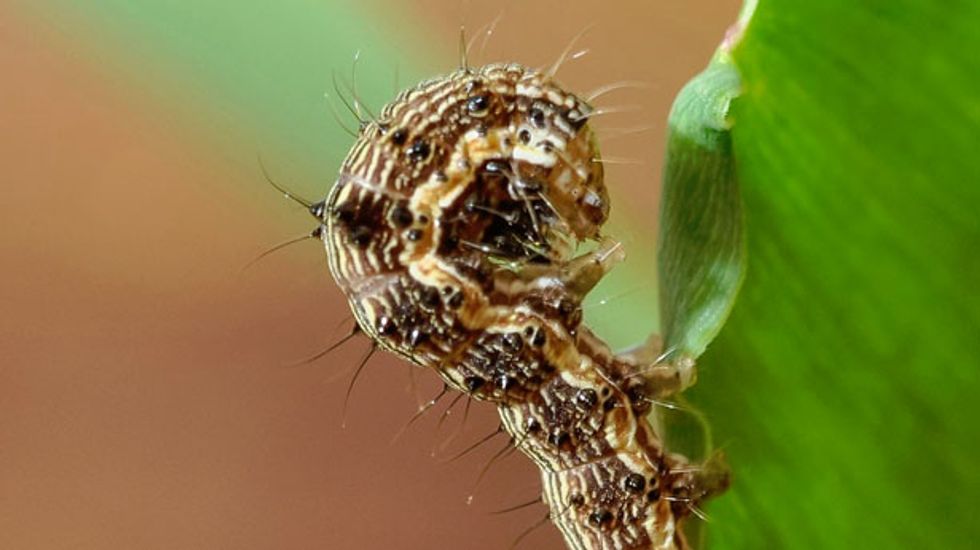 SAO DESIDERIO, Brazil (Reuters) - Brazilian farmers are battling a voracious caterpillar that likely arrived from Asia, challenging the agricultural superpower's widely touted mastery of tropical farming just as it is on the verge of becoming the world's top soybean producer.

The caterpillar, a variety known as helicoverpa armigera that thrives in dry heat, was spotted for the first time in the Americas on cotton farms in drought-prone western Bahia in early 2012, fuelling panic among farmers who had no idea what it was.

The caterpillar was soon in soybean fields thousands of kilometers away thanks to the long-distance flying power of its moths, consuming everything from tomatoes to sorghum.

While crop losses have thus far been limited, Brazil is now on red alert over the nation's third major pest outbreak in 30 years. Officials have stepped up port controls, farmers are rethinking planting patterns and the hardest hit are blaming the government's cumbersome bureaucracy for not allowing the import of pesticides that have helped control the bug in other nations.

Most importantly, the caterpillar appears to be eating away at Brazil's proud claim to have conquered the craft of growing reliable crops in a tropical region where pests and disease can spread more quickly than for other major growers.

"When you find helicoverpa armigera you have to act immediately, while they are still small," said Rudelvi Bombarda, who farms 2,000 hectares (4,942 acres) with his brother in São Desidério, a dusty farming hub in western Bahia.

Bombarda found his first helicoverpa armigera in a bean plant. He knew by the way the fattened, worm-like creature had chewed its way inside the pod, beyond the reach of chemicals, that it was not one of Brazil's usual leaf-eating pests.

"If you wait and send it to a lab it will be too late," he said.

Bahia, one of Brazil's newest farming frontiers, lost 3 million tons of soy and cotton, nearly half of its usual grains production, between the caterpillar and the drought last year, according to the National Confederation of Agriculture. Still, Brazil produced an 81.5 million ton soybean crop.

To be sure, the caterpillar has not reduced forecasts for an even larger soybean harvest that could dethrone the United States as the world's leading grower this year.

But it has provided a wake-up call on the risks of farming in the bug-ridden tropics, especially as more farmland is put into use. It also shows how Brazil's emergence as a major breadbasket has made it the fastest-growing market for biotechnology firms like Monsanto, which could benefit from the outbreak by selling its new caterpillar-resistant genetically modified soy and cotton seeds.

The government's agricultural research agency Embrapa determined helicoverpa armigera was a new species in Brazil last February, a year after farmers in Bahia had noticed it was different from other pests and seemed immune to pesticides.

"No one was expecting a species like this," said Alexandre Specht, the researcher whose microscope identified the caterpillar at a laboratory outside Brasilia.

The government is still studying how helicoverpa armigera arrived in Brazil. In the absence of a conclusive explanation, rumors of a bioterrorist attack occasionally surface.

Most likely, the caterpillar arrived with cargo on a plane or ship from Asia, said Luis Rangel, director of the sanitation department at Brazil's agriculture ministry.

"With the intensification of this transit of goods it is natural that sooner or later one of these pests would show up," he said in an interview. "The Chinese bring in a lot of plants, it could have come in through this transit."

China is Brazil's No. 1 trade partner and buys most of its soybeans.

In response to the outbreak, the government has added organic material detectors in its main ports and airports, technology that Argentina and Chile already had, Rangel said. Further measures will be taken in conjunction with the national intelligence agency when the World Cup starts in June, he said.

Embrapa researchers said Brazil was also looking into building a pest-identification database at its main ports, like the helicoverpa armigera-free United States.

The government had hoped to beat a pest cycle that has plagued Brazil once each decade since it started large-scale commercial agriculture.

First there was the silverleaf whitefly in the 1990s, followed by soy rust fungus 10 years later, and both are still problems. Brazil was also the world's top cocoa producer until Witches' Broom disease devastated the industry in the 1990s.

The country's soy area expanded by some 40 percent in the past five years, meaning the helicoverpa armigera outbreak has had a more significant economic impact, Rangel said. The tendency of farmers to plant soy repeatedly instead of rotating crops has also made Brazil more vulnerable to pests, he said.

To prevent another outbreak, the government is promoting "integrated agriculture," which involves monitoring pests, rotating crops and seed varieties, and using biological controls and natural enemies, with chemicals as a last resort.

It is a completely new approach, according to Rangel. "The helicoverpa changed everything about phytosanitary policy in Brazil," he said.

"The solution for helicoverpa is to bring in products to control the helicoverpa - immediately," said Bombarda, an agronomist from southern Brazil who was lured by the potential to work with irrigation in western Bahia's frontier and employs full-time bug monitors on his farm.

The Bahia state government announced that Emamectin Benzoate, a substance manufactured by Swiss crop chemical maker Syngenta, would be available in March 2013, shortly after Embrapa identified the new caterpillar.

Yet a year later, farmers still do not have access to it.

"It turned into an unprecedented bureaucracy... the government created a bunch of rules and obstacles," said Celito Breda, a cotton consultant in Bahia who has traveled across Brazil to discuss helicoverpa armigera and believes Emamectin Benzoate would provide the most efficient control.

Syngenta said the company awaited decisions from federal and state governments on regulations and permits needed to import the product, which is sold all over the world, including the United States and parts of Latin America.

Rangel said bureaucratic hurdles had been worked out and Emamectin Benzoate would be available with special approval on an emergency basis. He defended the government's caution, saying that as a top commodities exporter, Brazil must be careful about what pesticides are used to avoid retaliation from buyers.

Two weeks from harvest, Bombarda's soybean crop looks healthy. He applied pesticides 10 times, including five coats of Belt, a product he had never used before, made by Germany's Bayer AG.

Syngenta has so far lost out on what would have been a lucrative opportunity to sell Emamectin Benzoate in Brazil. But Monsanto, the world's largest seed company, had better luck.

Over the past 11 years, Monsanto developed a caterpillar-resistant soybean strain specifically for South America, with an eye on Brazil's growing pesticide reliance.

"Today there is basically 12 months of continuous planting and you don't break the pest cycle," said Renato Carvalho, an insect control specialist at Monsanto in Sao Paulo. "Over the years pressure increases, the pests become resistant to the insecticides and increase in population."

China approved imports of the new seed, Intacta RR2 Pro, in June and it was first sold on the Brazilian market in July. The seeds accounted for some 4 percent of soybean area planted this season and are so far proving resistant to helicoverpa armigera.

The company is also selling Bollgard Cotton seeds, which have helped control helicoverpa armigera in Australia. Some 90 percent of soybeans planted are genetically modified in Brazil, where international companies including Syngenta and Dow Agrosciences also sell seeds.

Jose Schreiner, a vice president at the National Agriculture Federation, said Intacta was proving resistant to helicoverpa armigera in his state of Goiás, but he hopes GMO technology will be just one of many tools used to combat the caterpillar.

"I think working with biological control, natural enemies, is the road we should pursue," Schreiner said, referring to viruses that can be applied to crops to kill caterpillars.

"We won't be able to eliminate it but we should be able to have a good level of control at a lower cost."