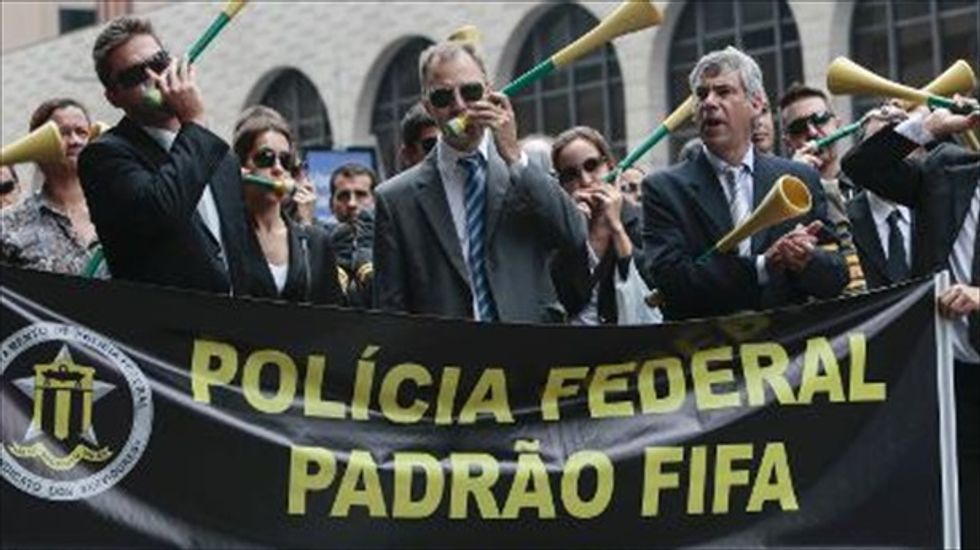 Brazil's federal police said Monday they will stop work Tuesday and Wednesday to demand better wages and improved security for the World Cup.

"Tomorrow we are going to stop work throughout the country," said Borges, whose colleagues say their wages have been frozen for seven years.

"We have a series of activities programmed for the year and hope not to have to bring them to a halt during the World Cup," which starts June 12, he added.

"We hope it doesn't come to that."

Sao Paulo is scheduled to host the opening match between Brazil and Croatia.

Police say just 30 percent of officers will provide a minimum service during their colleagues' mini-strike in a country beset by protests in recent months against corruption and the cost of hosting the Cup.

"We don't have sufficient resources to guarantee the security of Brazilians, still less of foreign visitors," he complained.

Brazil expects to welcome around 600,000 foreign visitors for the month-long soccer extravaganza.

According to Borges, despite being a continent-sized country Brazil only has 10,000 federal police nationwide to oversee border and airport security, the safety of public buildings and also issue passports.

They are also responsible for security of the head of state, President Dilma Rousseff, and her government's ministers.

Each of Brazil's 27 federal states have federal, military and civil police.

A decade ago, former president Luiz Inacio Lula da Silva indicated he would create a unitary public security structure via a constitutional amendment but the plan has fallen into abeyance.