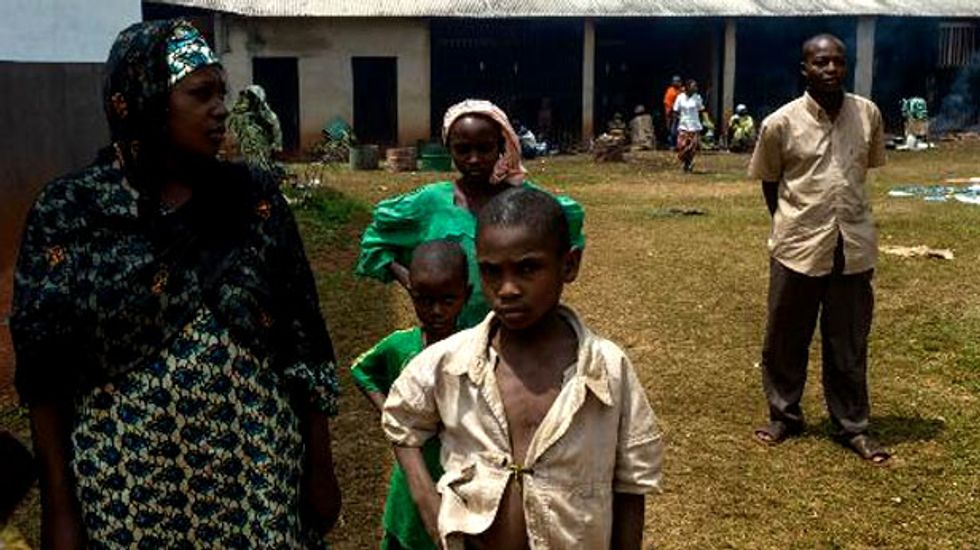 The Christian extremists came in waves, first a small group, then larger and increasingly violent forces, until Berberati, the second city in the Central African Republic, had been completely invaded.

Mayor Albert Nakombo described his town of some 50,000 people, located more than 600 kilometres (370 miles) southeast of the capital Bangui, as "peaceful up until now" and "proud of its tradition of hospitality".

The town was occupied for more than a year by mainly Muslim fighters of the Seleka rebellion who put Michel Djotodia in power last March and ran riot by attacking Christians.

But Berberati was spared by the Seleka forces who had gone on to commit widespread atrocities elsewhere when Djotodia was forced to step down by his regional peers in January for failing to halt the violence.

"There were a lot of them, but they left the town without doing any harm," Nakombo said. "We gave a big sigh of relief."

Then, a few days after the ex-rebels pulled out, on Saturday February 8, the first "anti-balaka" (anti-machete) group of vengeful Christians arrived in town. "This phenomenon had never existed in our region," the mayor said.

Formed early in the 1990s in northwestern CAR to fight bands of robbers, anti-balaka militias forces took up arms again last summer to attack civilians of the Muslim minority, accused of siding with the Seleka fighters.

Across the poor and landlocked country, a brutal surge of killings, mutilations, rapes and pillage has driven hundreds of thousands of people from their towns and villages. Entire Muslim communities have fled.

Amid international warnings of "mass atrocities and sectarian cleansing", summed up Friday in the words of UN Secretary General Ban Ki-moon, African nations and France have deployed more than 7,000 troops, due to be backed by European Union peacekeepers.

In Berberati, the anti-balaka came first from the north and then the east. "There were several hundred of them," said Father Thomas Isaie, the priest at the Saint Basile church situated in the town's main Muslim district, Loumi.

"On the Monday, they started to search the homes of Muslims. I prevented them from getting hold of the mosque. I said 'No, this is sacred.' During the day, another wave arrived, armed, more threatening and more vindictive and they began systematic destruction," the priest said.

Isaie added that about 10 Muslims were killed, while other residents spoke of 15 dead.

"What happened here was planned," the mayor declared. Among the militiamen, there were many renegade soldiers of the Central African Armed Forces (FACA), who had been beaten last year by the Seleka, according to witnesses.

Coming from the Bossangoa region to the northwest and also from neighbouring Cameroon, these insurgents include supporters of ousted president Francois Bozize who ruled 2003-2013, said Mamadou Achirou, a representative of the Muslim community.

More than 500 Muslims have taken refuge inside the bishop's residence, protected by a few Congolese soldiers from the African Union's MISCA peacekeeping force. Laundry lay on the grass to dry, men huddled under a frangipani tree to chat, and children laughed as the troops passed by.

These people were brought to safety by Father Isaie, who said that more Muslims come to his church each day. "There are also many Christians who protect the Muslims, bringing them to the parish or taking them in."

- 'Prove that they are Christians' -

Last Wednesday, about 150 French paratroopers arrived in Berberati as a scout force before the deployment of other units from France's Operation Sangaris military mission and of more MISCA troops.

"Sangaris is here but we need to take action," Mayor Nakombo said. "These people who have invaded us are wandering around town and mocking the population. We must put an end to that."

"Now they say they want to cooperate with the authorities, but that's a diversion," argued Father Isaie, though he acknowledged that "most of the anti-balaka" withdrew from the town when the French troops arrived.

"Looting and threats against Muslims are still taking place," he added.

"Parishioners are asking me for baptismal cards to prove that they are Christians. Are we going to accept that?" the priest asked on Sunday during a meeting attended by General Francisco Soriano, commander of Operation Sangaris.

A few moments before the meeting, a hand grenade exploded at one entrance to Berberati, seriously wounding three people.

"Be careful," a nun named Sister Benedicte warned the French general. "In the districts, I listen to young unemployed people and youths who are suffering. Many support the anti-balaka."

"The population needs to understand that those people have not come to protect them," Soriano replied. "They are here to help themselves and bring disaster. We must stop them. The Seleka have gone. We must not allow others to take their place."