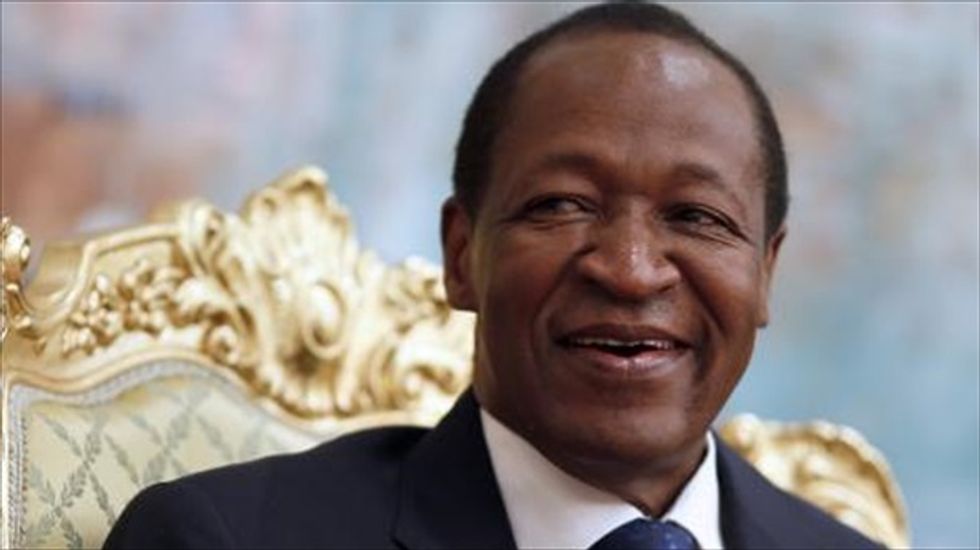 Any move by Burkina Faso's veteran President Blaise Compaore to tweak the constitution and run for office a fifth time could spark violence in the landlocked west African nation, experts say.

Compaore, an often controversial titan of west African politics, has hinted he may seek a referendum to extend his 26-year reign in 2015 polls, despite a two-term constitutional limit.

Growing anger over this prospect has already led to massive protests in the capital Ouagadougou and the resignation of several members of Compaore's own party.

Observers say the opposition to any attempt by the 63-year-old to cling to power is driven by the youth in a country where 60 percent of the 17 million-strong population is under 25.

This means they have spent their entire lives under the leadership of one man and -- with the poor former French colony stagnating at around 183rd out of 186 countries on the UN human development index -- many have had enough.

Lawyer and political analyst Siaka Coulibaly said the young were "totally resistant to the idea of seeing the president hang on to power".

"The ingredients for a possible social explosion are there," said Jean-Baptiste Ouedraogo, who led Upper Volta, the former name for Burkina Faso, from November 1982 until August 1983.

Compaore was only 36 when he seized power in an October 1987 coup in which his former friend and one of Africa's most loved leaders, Thomas Sankara, was ousted and assassinated.

He has always said that the killing of his onetime comrade in arms was an accident.

He is believed to have trained alongside notorious west African warlords such as Liberia's Charles Taylor and Sierra Leone's Foday Sankoh in slain Libyan leader Muammar Kadhafi's training camps.

However Compaore -- also accused of various levels of involvement in those two countries' civil wars -- has worked hard to cultivate an image as the troubled region's chief peacemaker in recent years.

When Guinea suffered a coup in 2008, when neighbouring Ivory Coast plunged into violence after a disputed 2010 election and when Mali's north was overrun by hardline Islamists in 2012, it was Compaore who stepped in to mediate.

He has also played a key role in the release of Western hostages kidnapped by Al-Qaeda in the Islamic Maghreb.

But while polishing his reputation abroad, Compaore has faced increased rumblings of discontent at home.

In 2011 he faced a wave of popular protests over rising food prices in the world's third poorest country.

A mutiny by soldiers, and even his presidential guard, forced him to dissolve his government and name a new army chief in a bid to appease the nation.

Last month, thousands of people took to the streets in Ouagadougou in protest after a pro-regime group called for the president to run for another term in office.

Blaise Compaore had said in mid-December that he may seek a referendum on a change of the constitution to lift the two-term cap.

Organisers said as many as 100,000 people turned out to protest any possible change to the constitution, though police estimated there were 10,000.

"Change or death!" protesters chanted, yelling "We are tired of Compaore."

After seizing power, Compaore won two seven-year terms in 1991 and 1998. He was able to run for election again in 2005 after five-year term limits were introduced in a constitutional change that was not retroactive.

Activist Abdul Karim Ouedraogo said it was not so much Compaore's management of the country as his "longevity" that people objected to.

Dissent from within the president's own party has also grown.

In recent weeks several members of Compaore's Congress for Democracy and Progress party have resigned to set up a protest group.

The outcry is reminiscent of that in nearby Senegal in 2012, when efforts by former president Abdoulaye Wade to tinker with the constitution and stay in office backfired horribly, prompting massive protests and a humiliating electoral loss to his main rival Macky Sall.

Compaore's government appears unperturbed by the outcry, which Prime Minister Luc Adolphe Tiao said was a "sign of the vitality of Burkinabe democracy".

"The head of state, aware of the situation, will do nothing aimed at threatening the achievements of our country," said Foreign Minister Djibril Bassole, often tipped as a possible successor to Compaore.