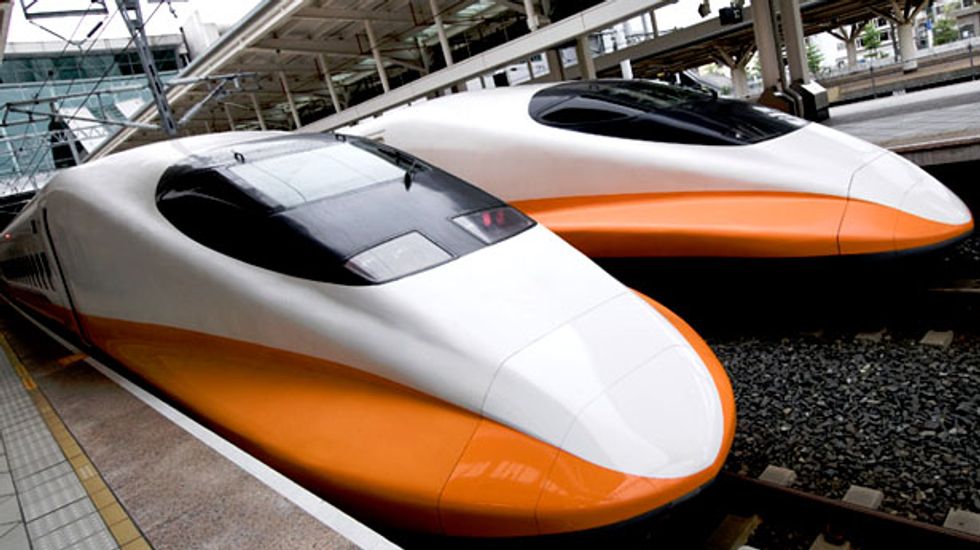 High-speed rail supporters hope breaking ground this year on a route between San Francisco and Los Angeles will be a watershed moment for a transport concept that has yet to take off across America.

"The opportunity is right in front of us all," former congressman James Oberstar told participants in a US high-speed rail conference this week.

"We just need the political will."

And to help his ambitious and expensive cause get out of the station, "we've got to have a success story somewhere. California should be that success story," added Oberstar, the former House Transportation and Infrastructure Committee chairman.

Promoters of the superfast trains -- which would race across California at up to 200 miles (320 kilometers) per hour -- recognize that opposition remains strong.

Congressional Republicans, for example, have balked at funding a national investment plan to create the extensive network sought by President Barack Obama and his Democratic allies.

While the Golden State is furthest along in plans to modernize its fleet, some train travel times are slowing elsewhere.

In 2008, California voters approved a plan to invest $9.95 billion as partial funding for high-speed rail between San Francisco, in the state's north, and the southern megacity of Los Angeles beginning in 2029. The 520-mile journey would take less than three hours.

Due to ongoing legal challenges, the state has yet to free up the $10 billion funding, but other federal and local money is expected to help fund construction of the first 29 miles of track this summer.

If all goes well, Californians could be riding high-speed trains by 2022 with the debut of service between Merced, 125 miles south of San Francisco, to the San Fernando valley outside Los Angeles.

Promoters want this line to showcase a planned national network -- what the US High Speed Rail Association (HSRA) envisions as 17,000 miles of track serving the country's major metropolitan corridors.

Key projects are envisioned between Boston and New York in the northeast, Florida's Orlando-Tampa route, and the Dallas-Houston connection in Texas.

The rail service could help decongest key airports and highways, many of which have reached saturation levels as metropolitan populations grow.

"There's nobody I know who's happy about the airlines in this country and what a pain in the neck it is to go anywhere," HSRA chief executive Andy Kunz told AFP.

Many Americans are desperate to see the network built, "but all they hear is negativity and delays," he added.

One theoretical concept standing in the way, Oberstar told AFP, is America's love of the automobile.

"But that has begun to fade," said the former lawmaker, who expressed a fondness for France's famed high-speed rail network.

A lowering of projected costs for the California project, from $90 billion to $68 billion, could ease voter apprehension about the massive undertaking, argued Thea Selby, who is on the advisory board of Californians For High Speed Rail.

But even in progressive California, surveys show public ambivalence toward the project.

The equivalent of one year of defense spending could fund the entire 17,000-mile national network, he said.

The huge investment required -- some $30 billion annually for 20 years, Kunz said -- is comparable to development of the US highway system in the 1950s.

But the proposal was instantly ridiculed by Republicans as a costly boondoggle, signalling that the high-speed rail battle is far from over.