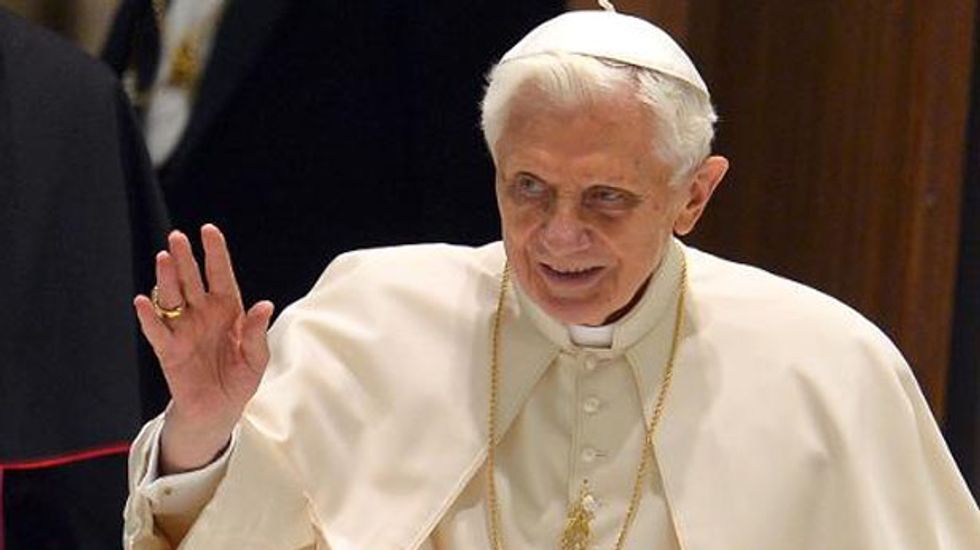 The Catholic Church on Tuesday marked one year since Benedict XVI became the first pope since the Middle Ages to resign, with Vatican insiders defending his troubled eight-year papacy.

"Today I ask you to join me in prayer for His Holiness Benedict XVI, a man of great courage and humility," his successor, Pope Francis, said in a message on Twitter.

The Vatican's spokesman, Father Federico Lombardi, joined in the tributes to Benedict, saying that the February 11, 2013 resignation had been "a great act of government that affected the life of the Church".

Benedict's momentous announcement has been seen as setting a precedent for future leaders of the world's 1.2 billion Catholics, although experts say papal resignations are unlikely to become a regular event.

There were no ceremonies planned on Tuesday in the Vatican, in line with the discretion shown by the German pope, who has been living a quiet life in a former monastery inside the Vatican walls since retiring.

The Vatican has mounted a campaign praising the "wisdom" and "greatness" of Joseph Ratzinger, even though he has been largely forgotten by the wider public and his image in souvenir stands around the Vatican has been replaced by Francis and John Paul II.

"We discovered the real face of Benedict XVI after his act: the affection, the gentleness," Vatican Radio said.

His pontificate, however, was an unpopular one and was marked by scandals in the Church -- including a wave of revelations of child sex abuse by priests, communication gaffes and a series of damaging leaks that revealed cloak-and-dagger politics in the Vatican.

"Curiously, he has never been so present on the scene as he has since his resignation. The false image of the Panzerkardinal has been erased," French cardinal Paul Poupard told AFP earlier.

Poupard said that "everyone" in the Vatican was now used to the novelty of having a pope and a pope emeritus in the Vatican, which it had been feared could cause confusion among the faithful.

Vatican expert Marco Tosatti said that Benedict's role in cleaning up the Church of weak or incapable clergymen had been "underestimated" by the media.

Tosatti said Benedict struggled to root out abuse, clerical careerism and incoherence and had prepared the way for Francis with his "revolution of tenderness".

In a new book that has just come out in France -- "The Man Who Did Not Want To Be Pope" -- Vatican expert Nicolas Diat portrays Benedict as a humble but demanding pope who was betrayed by his entourage.

"If there is a pope who has been confronted with mediocrity, with base behaviour and with vindictiveness both within and outside the Church, it is definitely Benedict XVI," Diat said.

Diat said that certain cardinals never accepted his pontificate, seeing it only as a transition and had plotted against Benedict for years.

Italian cardinal Tarcisio Bertone, who was secretary of state under Benedict, became a target of the plotters and was heavily criticised for diplomatic failures and apparent errors of judgement.

Bertone, who has since been replaced as Vatican "prime minister", has defended his office and accused "vipers" of ganging up against him.

He told the Il Giornale daily: "Benedict XVI had taken his decision some time earlier. He had spoken to me about it in mid-2012. He felt the weight of his age."