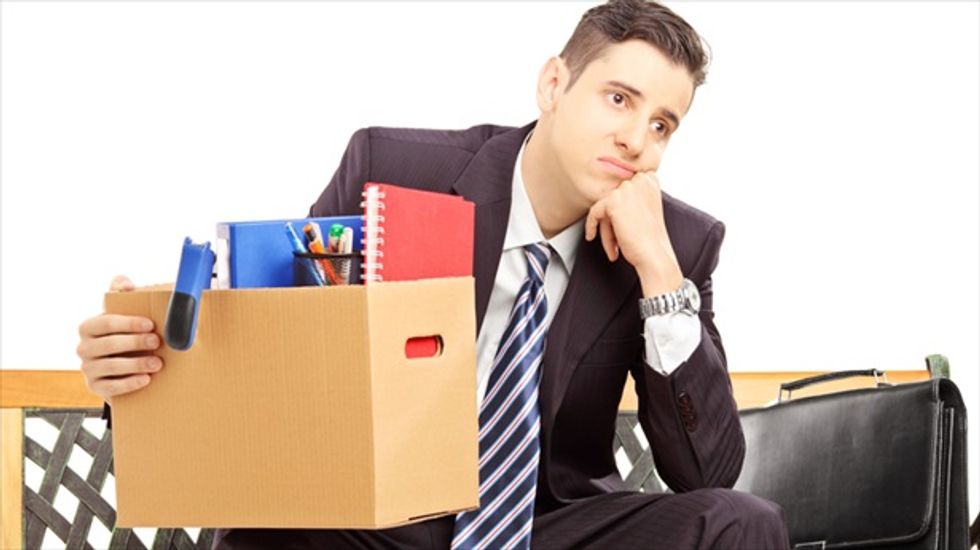 'Disappointed Redundant Young Man In A Suit Sitting On A Bench' [Shutterstock] http://tinyurl.com/o7j4bfs

WASHINGTON (Reuters) - Raising the U.S. minimum wage would lead to the loss of about half a million jobs by late 2016 while lifting almost a million Americans out of poverty, the Congressional Budget Office forecast in a report on Tuesday that reignited debate over one of President Barack Obama's top priorities this year.

Buoyed by polls showing three-quarters of Americans in favor of a minimum wage hike, Obama and his fellow Democrats advocate raising the minimum hourly wage to $10.10 from the current $7.25 in a move to boost the stagnant wages of millions of low income workers.

Republicans in Congress and allies in the business community have long argued that any such hike would encourage employers to shed workers to help offset higher salaries, and have vowed to fight it ahead of the congressional elections in November.

They quickly seized on one of the findings in the CBO report: that raising the minimum wage in three annual steps to $10.10 would result in about 500,000 jobs being lost by late 2016.

"With unemployment Americans' top concern, our focus should be creating, not destroying, jobs for those who need them most," said Brendan Buck, a spokesman for House of Representatives Speaker John Boehner, a Republican.

But Democrats also found something to tout in the report, which found that raising the minimum wage to $10.10 would bring 900,000 people above the poverty threshold of $24,100 a year for a family of four. Some 300,000 people would be lifted out of poverty if the minimum wage were raised to $9 in two annual steps, CBO said.

House Democratic Leader Nancy Pelosi said that enacting the wage hike would put "more money in the pockets of millions of consumers, strengthening the economic security of working families, and closing the opportunity gap for those struggling most to make ends meet."

The non-partisan CBO also said that increasing the hourly wage could reduce U.S. budget deficits by a small amount for several years, though it would then increase them slightly in later years.

In the run-up to the November elections, when the entire 435-member House and 36 of 100 Senate seats are up for grabs, Democrats are making income inequality and stagnant wages a centerpiece of their campaigns.

The Democratic-controlled Senate could debate minimum wage legislation as early as next month, according to leadership aides.

CBO estimated that families in poverty would see a total $5 billion increase in real income with a minimum wage at $10.10 and $1 billion under a $9 wage.

Altogether, 16.5 million workers would see their earnings rise with a $10.10 wage, while 7.6 million would benefit with a $9 wage, according to the CBO report.

Besides arguing for a minimum wage increase, Democrats also have been calling for a renewal of federal unemployment insurance benefits, which expired at the end of December.

Republicans have blocked renewing the temporary benefits aimed at those without a job for extended periods in the aftermath of a deep economic recession, arguing that job creation steps instead of subsidies were needed.

The U.S. unemployment rate currently sits at 6.6 percent, down from a post-recession high of 10 percent in 2009 but still painfully high.

Senate Republicans and Democrats so far have failed to reach a compromise on the benefits.

At $9, CBO estimated, the employment picture could range from a very slight increase to a loss of 200,000 jobs.

[Image: "Disappointed Redundant Young Man In A Suit Sitting On A Bench With A Box Of Belongings" via Shutterstock]