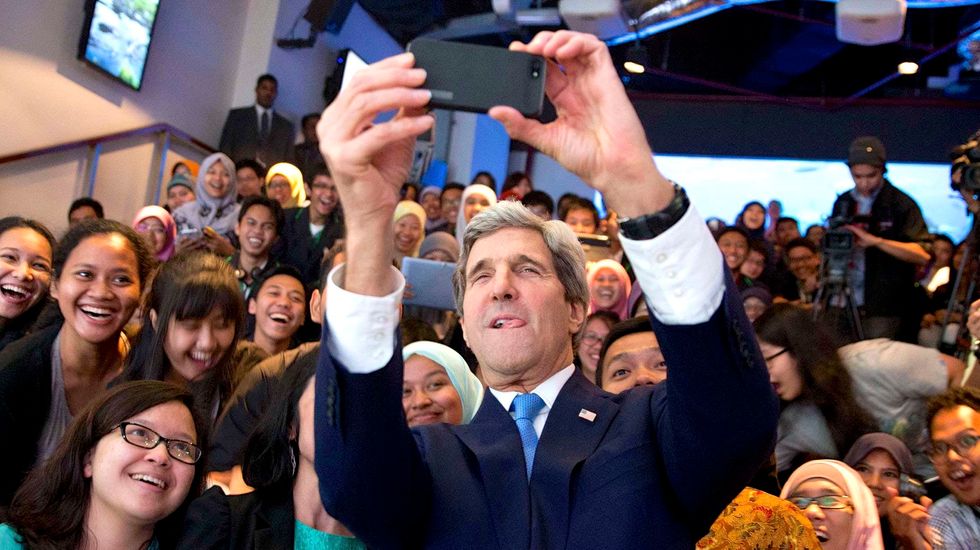 U.S. Secretary of State John Kerry (C) takes a selfie with a group of students before delivering a speech on climate change in Jakarta February 16, 2014. REUTERS/Evan Vucci/Pool

U.S. Secretary of State John Kerry warned Indonesians on Sunday that climate change could threaten their "entire way of life" as he called for all nations to do more to stop global warming.

Speaking to students, Kerry derided skeptics of the view that human activity causes global warming as "shoddy scientists" and "extreme ideologues" and he said big companies and special interests should not be allowed to "hijack" the climate debate.

Aides said the U.S. secretary of state had chosen Indonesia for the first of what is to be a series of speeches on the topic this year partly because as an archipelago of more than 17,000 islands it is particularly at risk from rising sea levels.

"Because of climate change, it's no secret that today Indonesia is...one of the most vulnerable countries on Earth," Kerry said in speech at a high-tech U.S.-funded cultural center at a Jakarta mall.

"It's not an exaggeration to say that the entire way of life that you live and love is at risk," he added.

Kerry's public push takes place against the backdrop of a negotiation among nearly 200 nations about a possible new global treaty on climate change that is scheduled to be agreed next year and to address greenhouse gas emissions from 2020.

In Beijing on Friday, Kerry announced that China and the United States, the world's largest emitters of such gases, had agreed to intensify information-sharing and policy discussions on their plans to limit greenhouse gas emissions after 2020.

U.S. officials made clear they hope that the example of the two countries, historically on different sides of the debate, working together might inspire other nations to do more to combat climate change.

Despite evidence that human activities that emit carbon dioxide contribute to climate change, some skeptics believe a rise in global temperatures is due to natural variability or other non-human factors. Others question whether temperatures are in fact rising.

The fact that temperatures have risen more slowly in the past 15 years despite rising greenhouse gas emissions has emboldened skeptics who challenge the evidence for man-made climate change and who question the need for urgent action.

Kerry, who faces a politically tricky decision at home on whether to allow Canada's TransCanada Corp to build the Keystone XL pipeline despite the opposition of environmental groups, had little patience for such skeptics in his speech.

"We just don't have time to let a few loud interest groups hijack the climate conversation," he said. "I'm talking about big companies that like it the way it is, that don't want to change, and spend a lot of money to keep you and me and everybody from doing what we know we need to do.

"We should not allow a tiny minority of shoddy scientists...and extreme ideologues to compete with scientific fact," he said. "The science is unequivocal and those who refuse to believe it are simply burying their heads in the sand."