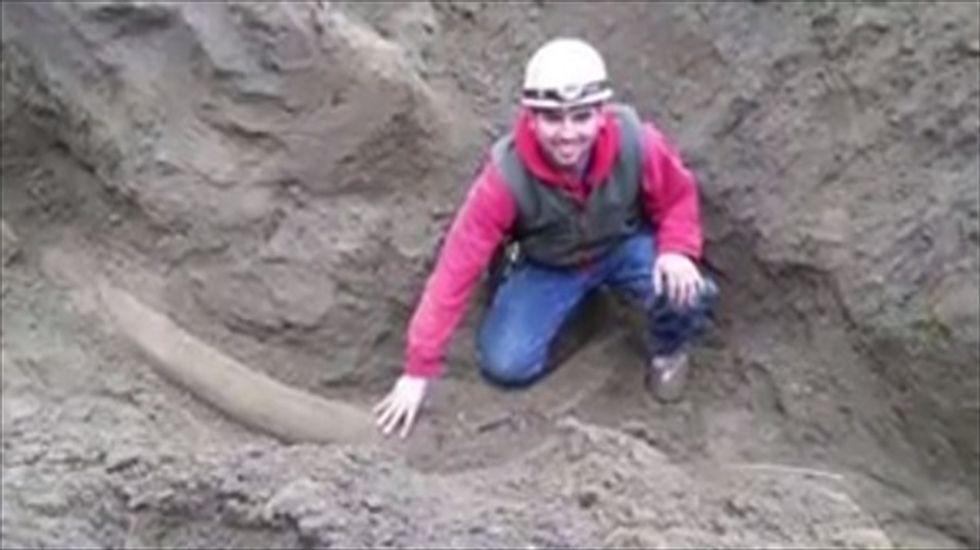 SEATTLE (Reuters) - Construction workers digging in a Seattle neighborhood have found the curved tusk of a mammoth, an ancient elephant relative that inhabited North America at least 10,000 years ago during the Ice Age.

Seattle's Burke Museum of Natural History and Culture said its paleontologists were confident that the fossil, uncovered on Tuesday, came from an Ice Age mammoth.

Crews were excavating for plumbing trenches in the city's bustling South Lake Union neighborhood when they found the tusk about 40 feet beneath ground level, said Jeff Estep, president of Transit Plumbing Inc, the subcontracting company involved in the dig.

An apartment building is slated to be built on the site where the discovery was made, Estep said.

"They hit something hard, uncovered it and saw it was long and a weird shape," Estep said. "They kept uncovering it by hand and realized it was a tusk."

The fossil was found on private property and likely not associated with an archaeological site, leaving it up to the landowner to decide what to do with the finding, according to the museum.

"If it went onto someone's mantle piece it would be a little bit of a loss for the community," Sidor said. "Our hope is the fossil will be donated to a public depository like a museum."

Five feet of the husk was excavated on Tuesday, and since then more of it has been uncovered, Sidor said. It remains in the ground where it was found, he said.

The Ice Age typically refers to the Pleistocene epoch, which began about 1.6 million years ago and ended about 11,000 years ago.

The mammoth that had the tusk appears to have lived between 16,000 and 60,000 years ago, which is the tail end of the Pleistocene epoch, Sidor said.

Mammoths, which were closely related to elephants, grew up to 12 feet at the shoulder and had a pair of long tusks that curved down from the face and upward at their ends. They arrived in North America from Asia about 2 million years ago, according to the museum.

They became extinct as the glaciers receded at the end of the Ice Age, the museum said.

Watch a video report on the discovery, as posted online by GeoBeats News on Wednesday, below.