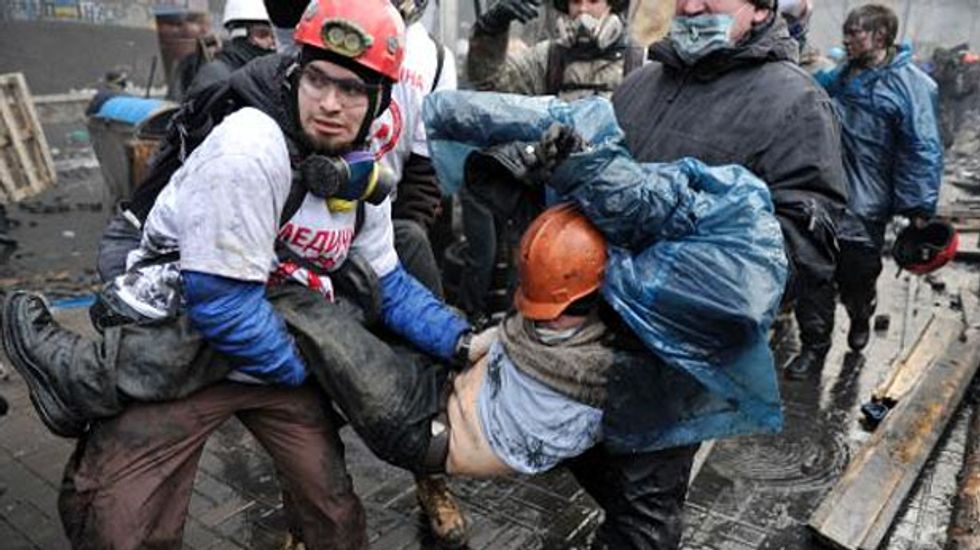 Parts of the operation -- detailed in official memos handed to a lawmaker by security officials -- appear to have been set in motion when deadly clashes erupted last week between protesters and police. But for unknown reasons, others failed to materialise, allowing protesters to resist and eventually fight back.

"These documents, detailing the criminal activities of those in charge of the security forces, were passed on to me by patriotic members of the SBU (intelligence and security services) and the interior ministry," legislator and former deputy interior minister Gennady Moskal wrote on his site, where the documents were published.

"It's about understanding the nature and magnitude of the crimes committed by the previous government and taking those responsible to court," said Moskal, a member of the party of freed opposition leader Yulia Tymoshenko.

The deadly violence last week capped three months of anti-Yanukovych protests and set in motion a series of rapid-fire political changes that toppled the president.

Codenamed "Operation Wave", the carefully planned assault envisaged shutting down Kiev, switching off opposition TV channels and leading crowds of demonstrators into a "trap" set by the security forces to "clean out" the main protest camp on the capital's Independence Square.

Meanwhile, thousands of security officers would have attempted to "neutralise" a major rightwing group that made up the hard core of the protest movement's self-defence group.

What actually happened was this: On Tuesday, February 18, as deadly clashes rocked the centre of Kiev, Ukraine's security service announced the launch of a vague "anti-terror" operation that the army said would allow them to deploy weapons on the streets.

That evening, police with loudspeakers around Independence Square announced the start of the operation and called on women and children among the thousands of protesters to quit the camp.

Shortly after, riot police charged protesters with water cannon, tear gas and stun grenades, retaking around a third of the square before abruptly stopping in their tracks.

Meanwhile the subway was closed and at least one pro-opposition TV channel went off-air. Roads into Kiev were soon blocked. Police marksmen were also strategically positioned around Independence Square.

After a tense stand-off that lasted around 30 hours, protesters on Thursday morning stormed police lines, an assault that turned into carnage when security forces opened fire with sniper rifles and Kalashnikovs, leaving scores dead.

- Could have killed 'thousands' -

It is unclear why the full operation failed to materialise, but what is certain is that the bloodbath precipitated Yanukovych's ouster.

The revelations triggered an outpouring of emotion in parliament on Tuesday, with Arseniy Yatsenyuk, one of the three most prominent protest leaders, saying "thousands" of people could have died if the operation had been launched in full.

Ukraine has issued an arrest warrant over "mass murder" for Yanukovych, who has disappeared since fleeing Kiev over the weekend. Parliament has called on the International Criminal Court in the Hague to try him for crimes against humanity.

A host of other former high-ranking security officials are also being sought. Some Ukrainians hope the leaks, which contain the names and contacts of those supposed to have overseen the operation, could be used in prosecutions.

The government marksmen who were deployed around the square are accused of shooting dead protesters on February 20 -- claims backed up by shocking video footage of demonstrators being gunned down.

The operation also involved a plan to capture Trade Union House on the square, which was occupied for months by protesters, and served not only as a canteen and medical centre but also as the headquarters of far-right paramilitary group Pravy Sektor.

When riot police moved onto the square on the night of February 18, the building went up in flames and was destroyed.

It is unclear how the fire happened, but some opposition lawmakers have hinted it may have been a consequence of "Operation Wave".

According to the documents, a former high-level official in Russia's military intelligence also took part in planning the operation as a special adviser.