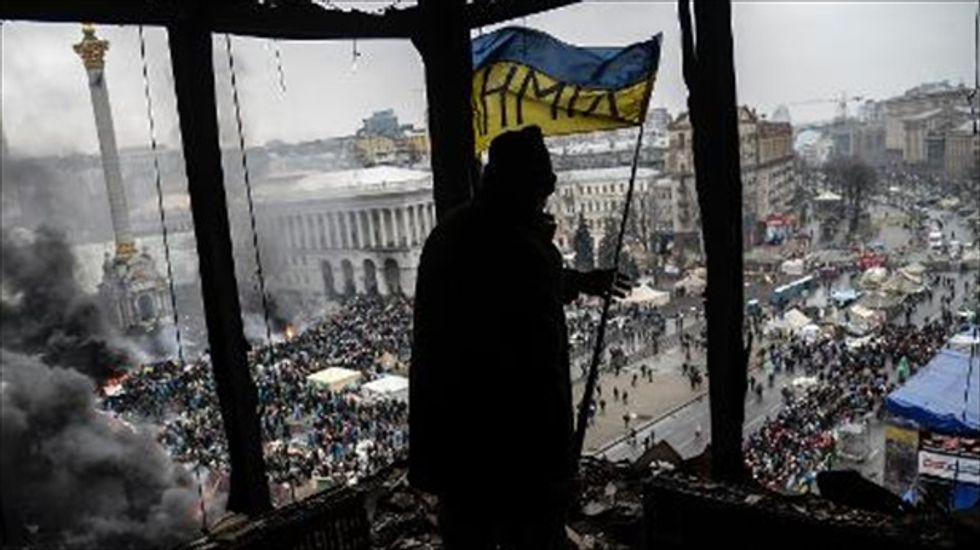 A demonstrator stands on a balcony overlooking Independence square is seen during the face off against heavily-armed police on Feb. 20, 2014 in Kiev [AFP]

More than 60 protesters were killed on Thursday by live gunfire in the deadliest day of violence in Ukraine since the beginning of protests.

The deaths -- which brought to nearly 100 the number of people who have been killed since Tuesday -- came as EU foreign ministers in Brussels imposed sanctions on Ukrainian ministers and security officials with "blood on their hands".

Ukraine's embattled President Viktor Yanukovych appeared ready to concede to one of the protestors' main demands after the latest wave of violence by suggesting to visiting EU dignitaries that he may be ready to hold early elections.

Emphasising the sense of crisis was a rare joint call for a "political solution" by the US and Russian leaders. Chancellor Angela Merkel spoke to Barack Obama and Vladimir Putin – who have bickered openly over a crisis that has pitted the ex-Soviet country’s future between Russia and the West -- by telephone and all three called for a halt to the bloodshed.

Opposition medics said more than 60 protesters had been shot dead by police on Thursday alone. Kiev authorities for their part put the total toll from three days of violence at 75.

Both sides accused each other of using snipers in a major escalation of to a standoff that was sparked by Yanukovych's rejection in November of an EU pact in favour of closer ties with Moscow.

But the White House said bluntly that it was "outraged by the images of Ukrainian security forces firing automatic weapons on their own people".

Volunteer medics who made a makeshift morgue out of a popular hotel overlooking the square also accused police of killing demonstrators with live rounds.

"They were shot in the head or in the heart by live bullets, not by rubber ones," said first aid worker Natalia.

Ukraine's interior ministry said only that it reserved the right to use live munitions "in self-defence".

The ministry also accused "extremists" of seizing 67 of its troops at gunpoint and holding them hostage in one of buildings near the war-scarred square.

"Among other things it was agreed with Yanukovych that there was a willingness to hold early elections this year – “both presidential and parliamentary" -- Polish Prime Minister Donald Tusk told reporters after a meeting with the Ukrainian leader in between Kiev that included Warsaw top diplomat and the foreign ministers of Germany and France.

But Ukrainian opposition leader Vitali Klitschko quickly cautioned after his own subsequent meeting with the same EU troika that there was "no deal yet".

And Tusk himself suggested that the violence seems to have spiralled too far for the shell-shocked country to be satisfied with a simply a move of election a few months ahead of their expected March 2015.

"The only way (the violence) can end is with the physical destruction of the president," a protester from the predominantly pro-EU western Ukraine named Bogdan said shortly after Thursday's most brutal violence subsided.

The shocking scale of bloodshed in a strategic nation that serves as a brittle diplomatic bridge between Russia and the West prompted EU officials to follow their US counterparts and slap travel bans against Ukrainians responsible for ordering the use of force.

Italian Foreign Minister Emma Bonino said an agreement was also reached at an emergency EU meeting in Brussels to impose asset freezes on those with "blood on their hands".

The measures mark a U-turn for Brussels diplomats who until Monday had resisted Ukrainian opposition demands for sanctions.

The United States has already put 20 top Ukrainian officials on a visa blacklist.

Ukraine's former master Russia blasted the sanctions as "bullying" and said President Vladimir Putin was sending a representative to Kiev to act as a mediator in talks with the opposition.

Ukraine's crisis has evolved into a broader anti-government movement after initially sparking from the shock of seeing Yanukovych spurn an historic EU trade deal in favour a $15 billion bailout from Kiev's old masters in the Kremlin.

The unrest has also swept through the pro-Western west of the country and parts of its more Russified east -- exposing the deep historical fault lines between the two.

Yanukovych had appeared determined Wednesday to end the crisis by force after the security services announced plans to launch a sweeping "anti-terror" operation.

He also sacked the army's top general -- a powerful figure lauded by the opposition for refusing to back the use of force against protestors.

The president was dealt a further embarrassing blow when Kiev mayor Volodymyr Makeyenko resigned Thursday from the ruling party in protest at the "tragedy" of the unrest.