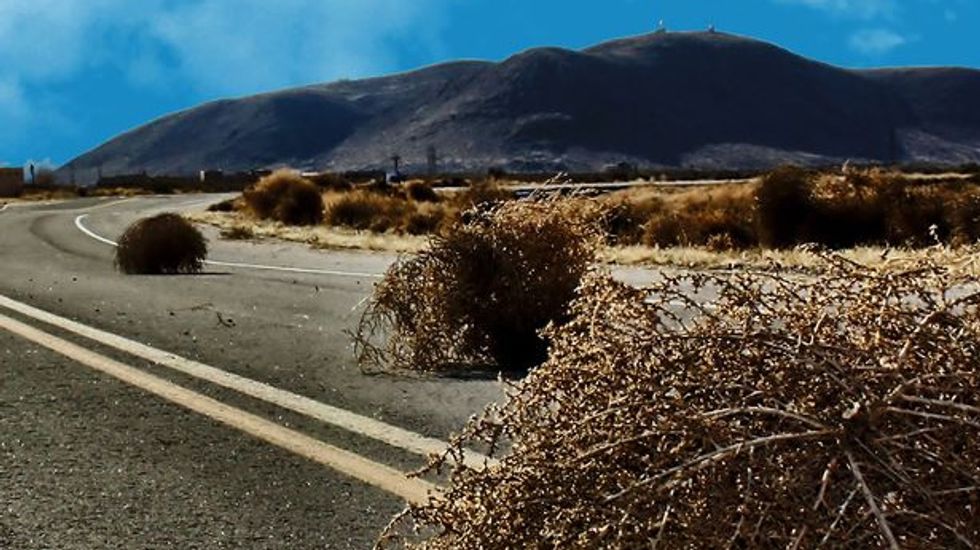 The infrastructure of drought-stricken Colorado is being increasingly, and dangerously, clogged by that iconic image of the American West -- the drifting tumbleweed.

Tumbleweeds are created when the above-ground parts of plants detach from the root and are whipped away the wind. The effect of tumbleweeds on the local environment is significant in purely ecological terms, as a single tumbleweed can extract upwards of 44 gallons from the topsoil as it rolls along.

Drought conditions in Colorado have not only exacerbated the creation of new tumbleweeds, they have provided existing tumbleweeds with more dry grass and wheat to entangle as they travel. This season's tumbleweeds are larger, and contain more desiccated material, which means that they are pulling more water from the topsoil, which in turn creates more tumbleweeds.

Left uncorralled, the tumbleweeds can merge on fences and in front of homes, trapping residents behind coils of weeds 10 feet high and six feet deep. They can also clog water canals, such as the ones at Evraz Pueblo, which cost more than $300,000 to remove.

When dry, the painfully thorny brush is not merely difficult to remove, it presents a potential fire hazard.

"They create an issue with us on keeping our fence lines clean," Adam Padilla, a maintenance supervisor for the Colorado Department of Transportation told The Gazette. "And in some locations in southeastern Colorado, they get caught under the wooden bridges and have to be cleaned so it's not a fire hazard."

Moreover, as Crowley County Commissioner Tobe Allumbaugh said, "[t]hey are just absolutely everywhere" and nearly impossible to remove. "They're like herding cats or maybe trying to catch balloons. You hit them with the snowplow and they bounce away, then they move back in behind you."

"You work 10 hours and all you've done is moved them around."

Cathy Garcia, the president of a southern Colorado advocacy group, told The Gazette that "[w]e talked about this issue and [the Department of Local Affairs, the Office of Emergency Management and the Department of Agriculture are] looking at what might be available within their departments as resources to help defray some of the costs of this. We are looking into federal resources and prevention."