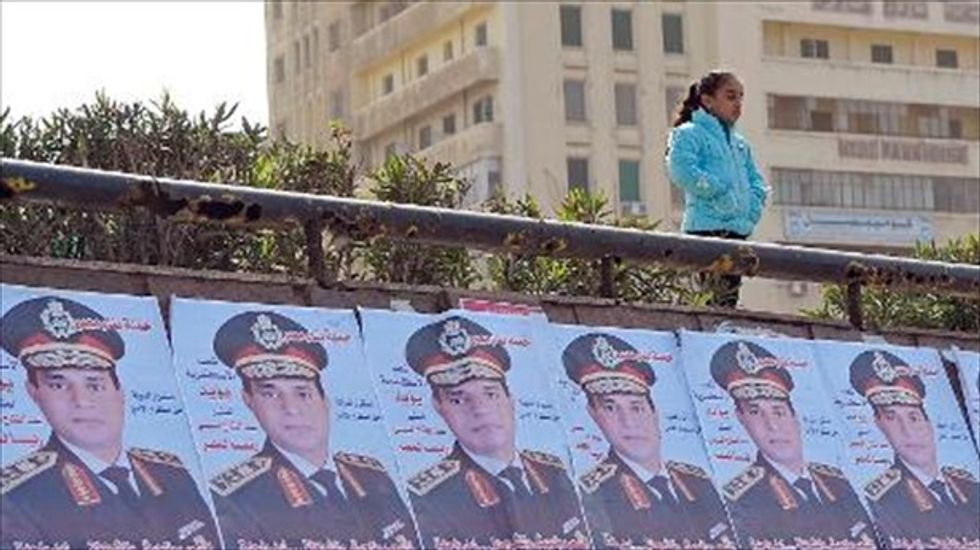 The military-installed government of Egyptian prime minister Hazem al-Beblawi said Monday it has resigned, ahead of a presidential poll which will likely bring army chief Abdel Fattah al-Sisi to power.

Sisi, by far the country's most popular political figure, has not yet announced his candidacy for this spring's presidential election, but aides say he has already decided to run and will make the announcement soon.

The field marshal, who is the defence minister and first deputy prime minister in the outgoing cabinet, has to resign from the government and the army before he can officially announce his candidacy.

A limited reshuffle to allow Sisi to step aside had been planned for weeks, but the resignation of the entire cabinet appeared to come as a surprise even for some government officials.

The administration has weathered sharp criticism over its handling of security and the economy amid a spate of bombings and labour strikes, and could have presented Sisi with unwanted campaign baggage.

"The cabinet decided in light of the current situation that the country is going through... to submit its resignation to Adly Mansour, the interim president," it said in a statement.

"For the past six to seven months, the government assumed its responsibilities and duties... the government did not spare any efforts to get Egypt out of a bad phase," Beblawi said in reference to the security and economic issues.

"This is not the time for personal interests. The nation is above everybody."

Beblawi said the government had also completed the first step in a road map outlined by the military-installed authorities, by holding a referendum on a new constitution in January.

Beblawi said the his government would remain in a caretaker role until the interim president signs off on the resignations, the official MENA news agency reported.

Government spokesman Hany Saleh told AFP that Monday's decision was taken because there was a "feeling that new blood is needed".

"Egypt is moving forward. This decision will not affect foreign relations or internal stability," he said, adding it was still unclear which ministers would keep their posts.

The government's resignation came as Hamdeen Sabbahi, a prominent candidate for the election, told AFP he fears a return to autocracy in Egypt three years after its Arab Spring uprising.

While his chances of winning against Sisi are seen as slim, Sabbahi said young members of his leftist Popular Current, which he founded in 2012, encouraged him to run.

Youths who took part in the 2011 uprising that toppled longtime president Hosni Mubarak "feel that their revolution was being stolen... as their comrades were being jailed and some killed before their eyes," he said in an interview.

More than seven months after Morsi's overthrow, Egypt remains battered by protests and militant attacks that have damaged its vital tourism industry and scared off investors.

Beblawi's government has announced two stimulus packages funded by Arab Gulf states, but still faces accusations of incompetence, even by supporters of Sisi who considered the government a liability.

The extension of the crackdown on Morsi's supporters to more secular activists has also alienated some former government supporters who favoured Morsi's overthrow.

Some leading secular activists who spearheaded the overthrow of Mubarak and then called for Morsi's ouster have since been jailed for unauthorised demonstrations.

But for many Egyptians who want Sisi for president, the priority is the stability they believe the field marshal can restore.