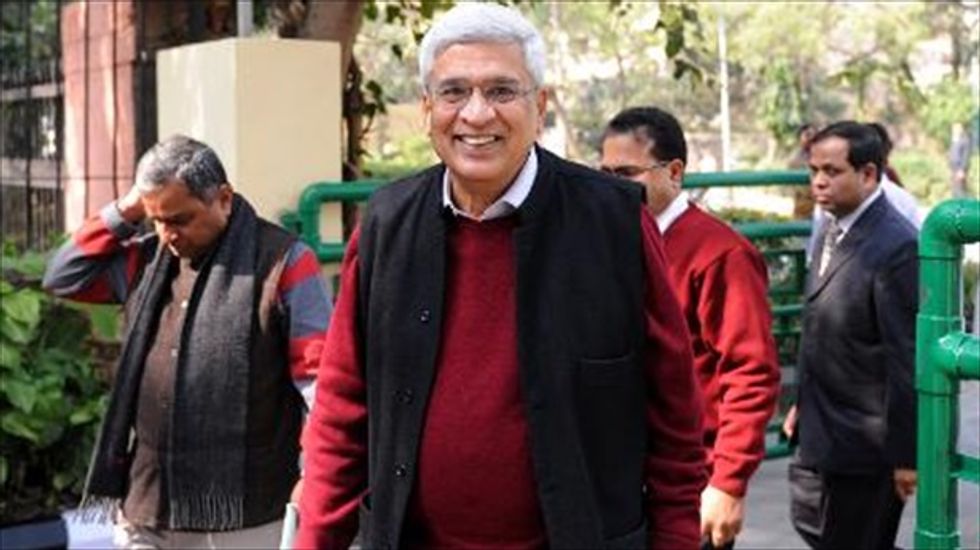 Senior leader of the Communist Party of India Prakash Karat arrives for a meeting of left and regional parties in New Delhi on Feb. 25, 2014 [AFP]

The grouping of left-leaning and regional parties announced their plans to become a viable alternative to the ruling Congress and the opposition Bharatiya Janata Party (BJP) headed by Narendra Modi.

Prakash Karat, a senior leader of the Communist Party of India, said the new front would "work for the defeat" of Congress and the BJP -- the traditional parties that together hold over half the seats in India's lower house of parliament.

"We need an alternative to both the Congress and BJP. That's why we the leaders of the 11 parties resolved today to work together," Karat said at a press conference in New Delhi.

Opinion polls show Modi on course to win the elections due by May ahead of Congress whose campaign is led by Rahul Gandhi, the son, grandson and great-grandson of former prime ministers.

But whoever wins will almost certainly have to stitch together a coalition comprising smaller regional parties.

No single party has won a parliamentary majority since 1989, giving often populist regional leaders immense power at the national level.

The 11 parties include three which rule at the state level in the electorally crucial eastern Bihar, northern Uttar Pradesh and southern Tamil Nadu states.

Flanked by Bihar Chief Minister Nitish Kumar and Samajwadi party chief Mulayam Singh Yadav from Uttar Pradesh, Karat lashed out at Congress for spawning "massive corruption" and at the BJP for pursuing a "communal agenda".

Karat said the parties had broadly agreed on a common policy framework and the front would give itself a name after more parties joined, while their prime ministerial candidate would be announced after the elections.

The Trinamool Congress, a regional outfit not part of the new alliance, dismissed the front as a "communist day dream".

"The Third Front is a hobby horse of the communists, who want to use the power of regional parties to manipulate their way to influence without responsibility and to promote obsolete agendas," leader Derek O'Brien tweeted.