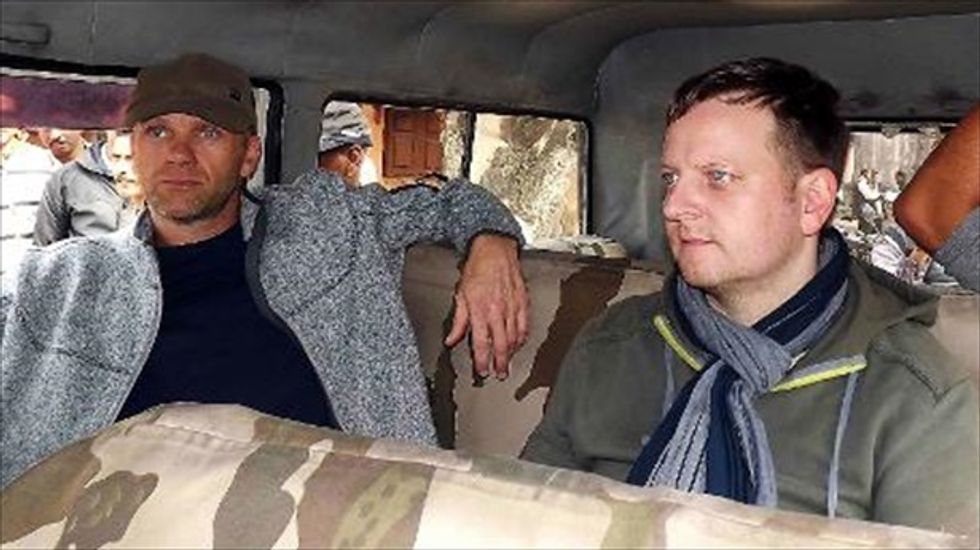 In this photograph taken on Feb. 9, 2014, foreign television crew, Lars Warden of Germany (L), and Benoyet Maris of Belgium, sit inside a police vehicle on their way to Jalpaiguri court [AFP]

The trio -- from the Netherlands, Belgium and Britain -- were remanded in police custody for two days after being arrested on Saturday over the use of 22 unregistered satellite phones.

Foreigners wanting to use a satellite phone in India, a frequent target for attacks from Kashmiri, Pakistani and Maoist militants, must declare them to immigration officials.

"Peking Express" is a hit reality TV show that tracks eight couples as they backpack around Asia on a shoe-string budget. It was originally shown in the Netherlands and Belgium but has since appeared in 10 countries.

Police said the crew were shooting for the French version of the show, broadcast on the M6 channel, and were working for Belgian production company Eccho Line.

Presenter Stephane Rotenberg said Indian authorities were holding the other crew members at their hotel.

"We are stuck. There are armed guards at the hotel entrance," he said on French radio.

"We're not allowed to move, we don't have our passports. It will get sorted out, but we don't know when."

A total of 49 foreigners travelling near the border of India and Bhutan were detained and questioned on Saturday over the phones, which are considered a national security threat.

"Three people heading the foreign reality TV show crew in Chalsa were arrested and produced before a court on Sunday," Jawed Shamim, inspector general of police in the northern area of West Bengal state, told AFP.

"Chief judicial magistrate of Jalpaiguri court remanded the three people in police custody for two days on Sunday," he said.