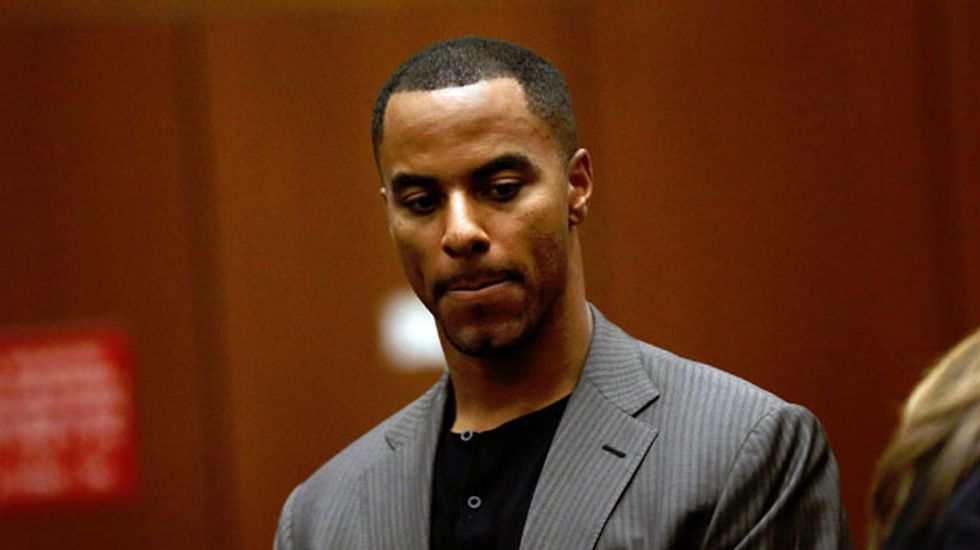 LOS ANGELES (Reuters) - Former football star Darren Sharper pleaded not guilty on Thursday to charges that he drugged and raped two women in a Los Angeles hotel as investigations continue into similar sex crimes in four other U.S. states, according to police and court documents.

The hearing occurred on the same day police in his home of Miami Beach, Florida, released details on one of the probes against him.

Sharper, who played 14 years in the National Football League and won a Super Bowl title in 2010 with the New Orleans Saints, is accused by prosecutors of giving the prescription sleep medication zolpidem to the women in Los Angeles, causing them to pass out.

In October, he met two women at a West Hollywood night club and brought them back to a Los Angeles hotel room, where he gave a drug-spiked drink to both of them and raped one, prosecutors said in court papers. He did the same to another pair of women in January, prosecutors said.

Sharper, 38, who became an on-air commentator for the NFL Network after retiring from football, wore a dark gray pinstripe suit with no tie in Los Angeles Superior Court. The NFL Network suspended him without pay after his arrest in January.

The five-time Pro Bowl selection was released on bail of $1 million, which the judge increased from $200,000. He declined to speak to reporters when he was leaving the courthouse, as did his attorneys.

Prosecutors had wanted to raise the bail amount even higher, to $10 million, citing sex crime investigations against him in Louisiana, Nevada, Arizona and his home state of Florida. Charges have not been brought against Sharper in those states.

"He's a danger to the women in our community. He preys on women between 20 and 23 years old. It's the same story in every single case," Los Angeles Deputy District Attorney Stacy Okun-Wiese told the court.

Judge Renee Korn said the prosecution's request for such a high bail was excessive.

Sharper's attorney had argued that prosecutors have not shared with the defense team certain material from investigations in other states, such as video recordings given by alleged victims.

Separately, police in Miami Beach, where Sharper lives, released a report of their investigation into a woman's allegation that the football star also raped her but prosecutors have not charged Sharper.

A woman told investigators she was intoxicated when she went to Sharper's condo in 2012 and fell asleep. When she woke up, she realized Sharper was having sex with her and left, according to the police report.

The woman reported the 2012 incident to Miami Beach police two days after Sharper was arrested in Los Angeles on January 17, police said.