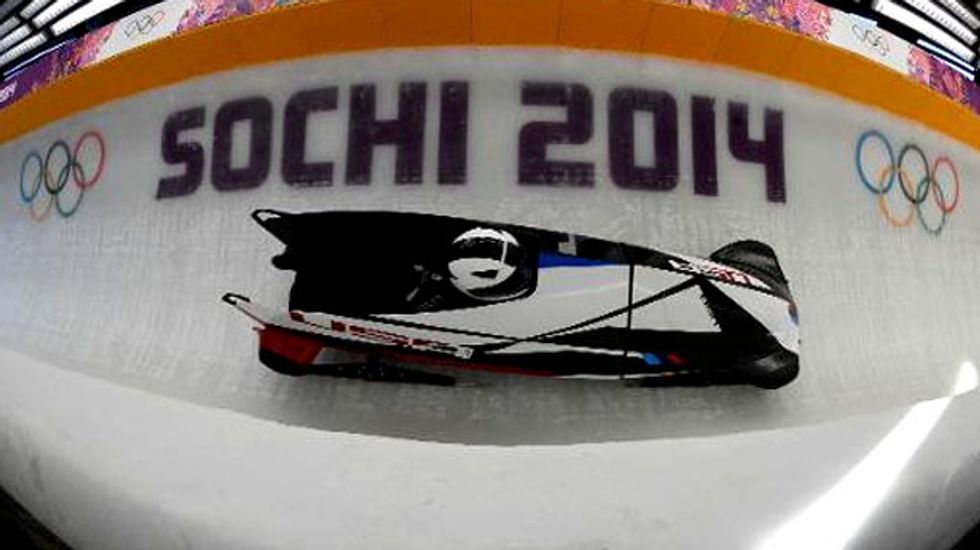 NBC has completed another Olympics broadcast that featured tape-delayed coverage of events sliced up to focus on American athletes, and interrupted by feature packages and lengthy advertising breaks.

But NBC itself couldn't be happier. At least according to Deborah Turness, the British journalist who became the president of NBC's news division in August. We have an e-mail she sent out to the entire news staff congratulating them on another successful Olympics broadcast.

There's no mention in the e-mail of #NBCFail, the hashtag that appeared during the 2012 Olympics broadcast from London when Americans viewers were angered by the tape delays and chopped-up action. The hashtag was trending again during the broadcast from Sochi.

After the initial weekend from Sochi, the Toronto Globe & Mail ran a story about Americans so frustrated with NBC's treatment of the games, they were giving up their cable networks and getting Canadian ISPs in order to see the Canadian television coverage. (In places like Europe, viewers get to watch Olympic games live, commercial-free, and on multiple channels.)

The Globe & Mail received a response from an NBC spokesman, who pointed out that the network was showing more sporting content than ever before (as long as you knew where to look on your cable dial, and supplemented with online watching): “NBCSN is televising live every performance in the figure skating competition -- the first time that has ever been offered in an Olympics -- and the channels of NBCUniversal are offering live coverage of men’s and women’s hockey, bobsled, Nordic combined, cross-country skiing, speed skating, and ski jumping."

On Sunday night, the final night of Sochi coverage, the first hour of NBC's coverage was devoted to a documentary about the 1990s feud between Nancy Kerrigan and Tonya Harding. The closing ceremony that followed had actually taken place hours earlier, but NBC still had live reports from on-air talent broadcasting in the wee hours, Sochi time.

"The complaints are reminiscent of those that emerged during the 2012 Olympics in London, when a massive social media backlash emerged from viewers annoyed they couldn’t watch programming live and online for free. They rallied around the hashtag #NBCFail, and that Twitter phrase seems to have made a strong comeback with the Sochi Games," wrote the Globe & Mail.

But NBC's Turness is triumphant. Here's the e-mail she sent to her staff...

With the closing ceremonies now behind us, I want to thank and congratulate everyone involved in producing such terrific coverage of the Sochi Olympics from start to finish. The power of the Olympics gives us a unique opportunity to connect with our viewers. But we didn't take that for granted. You all worked so hard on every platform and in every program to tell extraordinary stories of determination, courage, and commitment -- stories that inspired.

On-air our shows were mesmerizing, with snow-capped mountains and the Olympic torch our studio backdrop. What our viewers couldn’t see was the dedicated army of producers, researchers, editors, and people at every level who devoted endless hours behind the scenes -- sacrificing schedules, personal lives, and maybe a bit of sanity to create the highest quality content. From the months of meticulous planning to quick decisions made in the moment, countless people from across the news division and around the world contributed to this Herculean effort.

I want to particularly thank Madeleine Haeringer and Stacy Brady and their teams who did heroic work on the ground to set up our operations and newsgathering infrastructure. We must also thank our colleagues at NBC Sports who generously shared many of their resources with us.

The Olympics came alive with the full TODAY team broadcasting live from Sochi. Matt, Savannah, Al, Natalie, Willie, Jenna, and Keir brought the spirit of the Games to our viewers at home as they interviewed star American athletes and shared their own adventures in Russia. It was fantastic to see the genuine fun and energy buzzing among the team on set. Who can forget Matt and Al’s trip to the Russian bathhouse or their return to the luge? The momentum continued with an electric show this morning, packed with great moments, including our announcement of Tamron Hall officially joining the family, the launch of the “Love Your Selfie” series, and the Mayor's ribbon cutting of the new Today Show Plaza. The show enjoyed a much-deserved victory in the ratings during the Olympics, but we also know that the challenge is now to convince those Olympics viewers to stay with us. This morning’s show was a terrific start.

Brian, Lester, and the Nightly News team worked long days and very late nights to broadcast live from the Olympic Park at 3:30am Sochi time. Chris Jansing, Kevin Tibbles, and Anne Thompson brought us the ecstasy and the agony from the snow and ice, while Richard Engel expertly reported on security issues in Russia and beyond. Of course the biggest news of the day was not always in Sochi and I'm extremely proud of the way we covered the severe storms across the U.S., the crisis in Syria, the protests in Ukraine and Venezuela, and the worsening drought on the West coast. Nightly was rewarded with its highest ratings in over nine years, topping the first week averages of the past four Olympics.

Meanwhile here at home, Meet the Press continued to drive the political conversation with news-making interviews and discussions about Russia’s role on the international stage as well as the biggest pressing issues in domestic politics. David’s exclusive interview with Susan Rice this past weekend is dominating headlines and establishes yet another great example of the power and prestige that Meet the Press holds in this arena.

As you know, our transformation project has been underway for the last few months, directed and created by leadership and colleagues from across the division. I plan to host a Town Hall to share the latest plans with you and to answer any questions you may have about them. Stay tuned for dates.

In the meantime, thank you, as always, for all the great work you do.

NBC's next Olympics broadcast will be in 2016 from Rio de Janeiro, which is only two hours ahead of New York. Will NBC be able to delay and package as much of the games then?

We sent an e-mail to Turness letting her know that we'd been sent a copy of her e-mail. We're still waiting for a reply.