ExxonMobil chief, neighbors sue over fracking concerns near their property 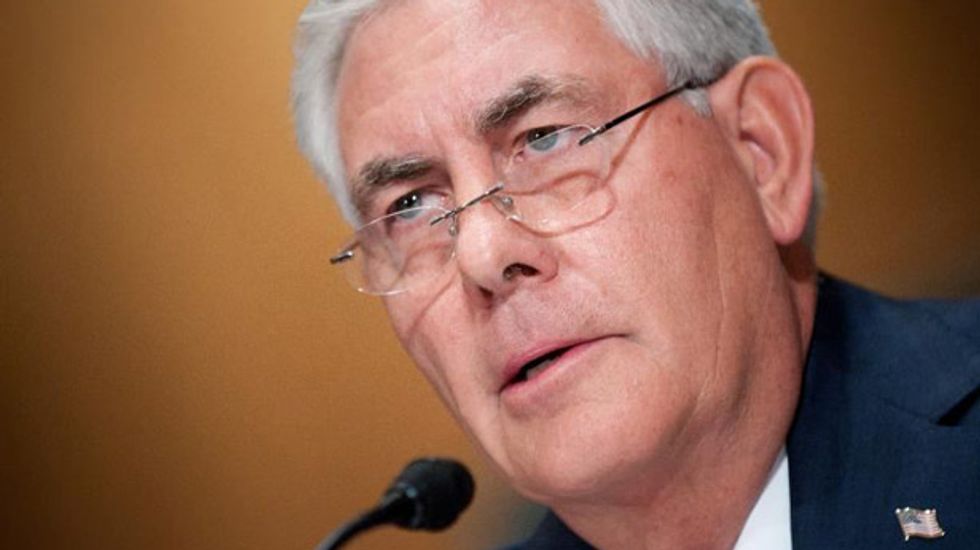 ExxonMobil chief executive Rex Tillerson has been a zealous advocate of the US shale boom and the controversial use of "fracking," but not when it hits too close to home.

Tillerson and his neighbors are suing to block the construction of a 160-foot-tall (78.8-meter-) water tower, to be used in part for hydraulic fracturing, near his $5 million ranch in Bartonville, outside Dallas, according to a complaint filed in a Texas court.

The tower, which now is partially built, "will create a constant and unbearable nuisance to those that live next to it," according to the suit.

Some of the water will be used in hydraulic fracturing, or "fracking" for shale oil and gas, resulting in truck use that will cause "noise nuisance and traffic hazards," said the complaint.

The suit seeks a permanent injunction against the tower's construction rather than financial damages.

"Even though the damages might compensate them for their diminished property values, damages cannot compensate fully for the substantial interference with Plaintiffs' use and enjoyment of their land."

"These are luxury properties worth multiple millions of dollars," said the complaint.

"Each of the homeowners built or purchased their homes in Bartonville to live in an upscale community free of industrial properties, tall buildings and other structures that might devalue their properties and adversely impact the rural lifestyle they sought to enjoy."

Tillerson, who is also is chairman and president of the largest US oil company, is one of six plaintiffs in the case. The first plaintiff listed is former Republican House Majority Leader Richard Armey, whose property is worth in excess of $2 million.

The suit comes as Exxon and other leading energy companies press on with campaigns to promote fracking around the US in spite of opposition from critics who cite environmental damage and health concerns.

Jim Leggieri, general manager of Bartonville Water, told AFP not all of the water will be used for fracking, which drives pressurized liquids into rocks to create fissures that release gas and oil.

"We are building a new elevator tower to serve citizens in the area," Leggieri said, with some of the water intended to go to 6,000 homes in the area as well as to farms.

The suit exaggerates the impact of the trucks, which are "not as loud as they say," he added.

Tillerson and the other plaintiffs have appealed a lower court's ruling in favor of the water tower project. A decision on the appeal is expected in June or July.