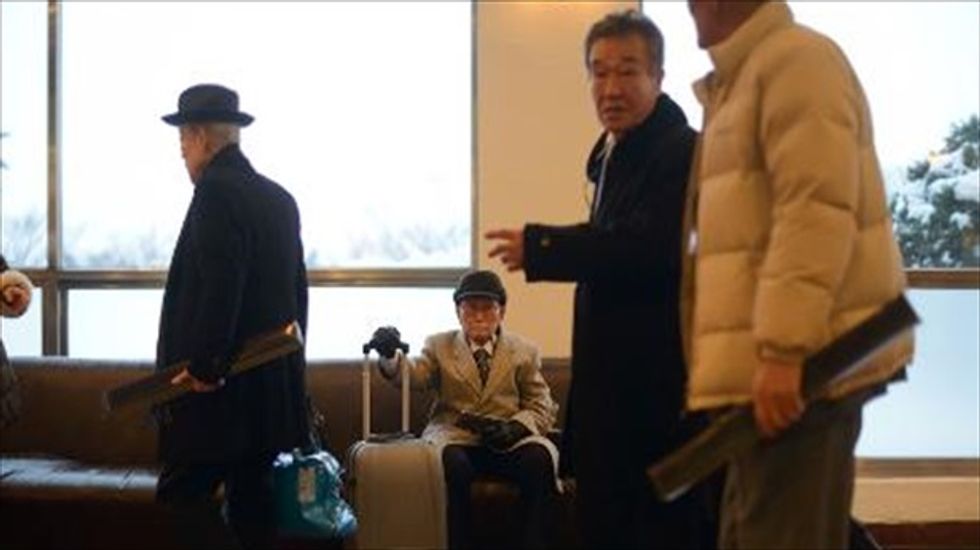 Around 80 elderly South Koreans met privately Friday with North Korean relatives they haven't seen for 60 years, on the second day of a highly-charged reunion for families divided by the Korean War.

In contrast to the previous day when their tearful and, in some cases, clearly traumatic meetings were played out in front of TV cameras, they were allowed three hours in their own rooms to try and bridge the decades of separation.

The event, held at a mountain resort in North Korea, was only secured after intense North-South negotiations, and has been seen by many as a possible first step towards improved inter-Korean cooperation.

It is the first such reunion for more than three years, and followed a rare concession from North Korea, which had originally threatened to cancel if the South and the United States pushed ahead with annual joint military drills that begin on Monday.

North Korea's main ally China, which has come under increased U.S. pressure to push Pyongyang into abandoning its nuclear weapons programme, welcomed the reunion as a moment of "great significance".

"We believe this is an important and correct step forward taken ... with national interests and regional peace and stability in mind," foreign ministry spokeswoman Hua Chunying said in Beijing.

In an apparent goodwill gesture, Seoul approved Friday the shipment by two private aid groups for close to $1.0 million worth of tuberculosis medicine and powdered milk to North Korea.

The 82 South Korean participants, with an average age of 84 and some so frail they had to be moved by ambulance, arrived at the resort midday Thursday after crossing the heavily-militarised border in a convoy of 10 buses.

After a brief lunch, they were led into a banqueting hall where they first came face-to-face with the 180 North Korean relatives they had applied to see.

Some simply embraced and sobbed, while others stared and stroked each other's faces, seemingly unable to believe that they were in the same room.

Photos were exchanged and lovingly pored over, not just old black-and-white ones of the family when it was together, but also brand new colour pictures of husbands, wives, children and grandchildren that neither side knew even existed.

One of the oldest South Koreans, a 93-year-old man who was separated from his pregnant wife during the 1950-53 conflict, met the now 64-year-old son he had never seen.

"So old," were his first words as they came face-to-face -- the resemblance strikingly clear to people watching.

"Let me hug you," the father said and then, sobbing, they both embraced.

The North Korean women wore traditional hanbok dresses, while the men were mostly dressed in dark suits. All seemed to be sporting badges of former leaders Kim Il-Sung and Kim Jong-Il -- obligatory accessories in North Korea.

Tens of millions of people were displaced by the sweep of the 1950-53 Korean War, which saw the frontline yo-yo from the south of the Korean peninsula to the northern border with China and back again.

The chaos and devastation separated brothers and sisters, parents and children, husbands and wives.

Because the conflict concluded with an armistice rather than a peace treaty, the two Koreas technically remain at war and direct exchanges of letters or telephone calls are prohibited.

The reunion programme began in earnest after a historic North-South summit in 2000, but the numbers clamouring for a chance to participate have always far outstripped those actually selected.

Of the 82 South Koreans attending the current reunion, 14 needed wheelchairs and two were forced to return home a day early for health reasons.

Friday's private gatherings will be followed by another mass, open reunion in the afternoon.

Then on Saturday, comes probably the most traumatic moment of all: a farewell ceremony that both sides understand -- given their advanced ages -- marks the last time they will ever see each other.