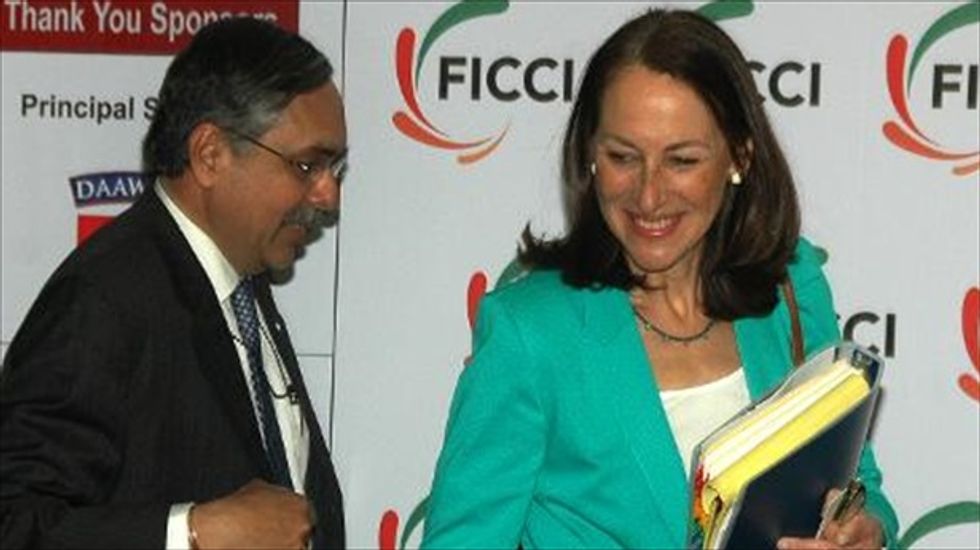 Handout photo from the Federation of Indian Chambers of Commerce and Industry on Feb. 11, 2014, US Food and Drug Administration commissioner, Margaret Hamburg (R) and Secretary General of FICCI, A Didar Singh meet in New Delhi [AFP]

U.S. regulators are not targeting India, despite a series of import restrictions on drugs from the major US trading partner, the Food and Drug Administration chief said Friday.

FDA Commissioner Margaret Hamburg briefed reporters after her first official trip to India, where she met with government and industry leaders earlier this month.

India is the second largest U.S. supplier of prescription and over-the-counter drugs, and its big pharma companies Ranbaxy and Wockhardt have been hit with multiple U.S. import suspensions due to safety concerns.

"We are not targeting Indian countries. We are undertaking our required regulatory activities," Hamburg said.

"When products are sold in the United States for use by American citizens, then those products have to meet our standards."

Hamburg said the FDA has ramped up inspections at Indian drug plants as part of a global effort to improve safety.

The agency has 12 staff members in India, and plans to expand to 19, she added, describing the nation as "particularly important" to US food and drug trade.

"The fact that we have increased our presence in India is true but it reflects the fact that India is a very significant and growing player in the US marketplace with respect to both pharmaceutical products and food."

While in New Delhi, Hamburg and Indian health secretary Keshav Desiraju signed their first statement of intent to cooperate in the field of medical products.

Hamburg described as "encouraging" her conversations with senior representatives during her eight-day trip to India, the United States' third largest trading partner.

At the start of Hamburg's visit, Health Minister Ghulam Nabi Azad said India's lower-cost medicines should not be viewed as "cheap and spurious."

India's generics industry is a major supplier of lifesaving drugs, including antiretrovirals for HIV, to the United States and over 200 other nations.

Many lower-income countries rely on the generics produced by Indian plants as a key source for affordable medicine.

But Ranbaxy, one of India's biggest drugmakers, has been hit repeatedly with FDA import suspensions, most recently in January, when a fourth manufacturing plant was cited for violations from expected "good manufacturing practice."

"I believe the Indian generics companies can make the products well, but it is the lack of oversight," Bate told AFP, describing CDSCO as "corrupt."