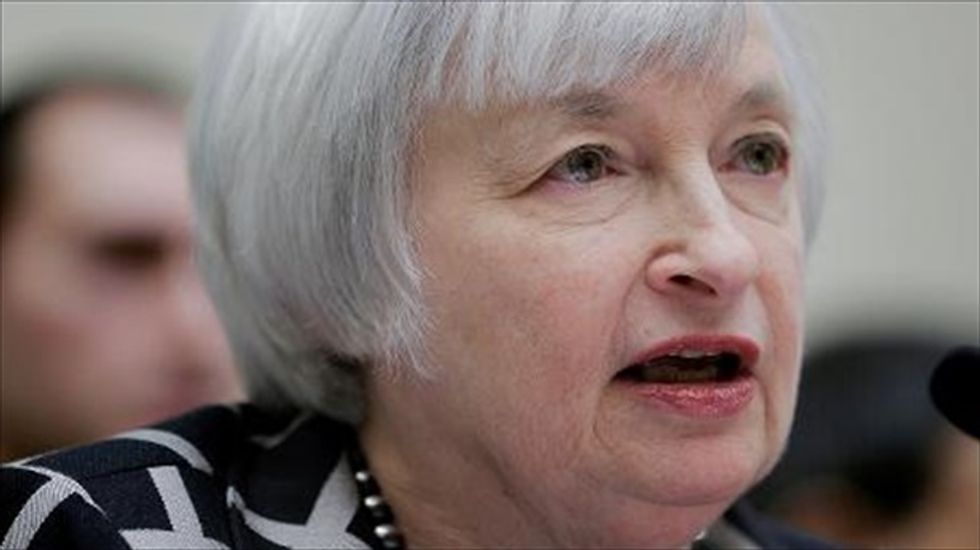 Janet Yellen, the new Federal Reserve Board chair, appears before the House Financial Services Committee to give her testimony on Feb. 11, 2014 in Washington, DC [AFP]

New Federal Reserve chief Janet Yellen painted a steady-as-she-goes course Tuesday as she takes the helm of the US central bank from her predecessor Ben Bernanke.

In her first public comments on policy since becoming Fed chair at the beginning of this month, Yellen told Congress the US economy is expected to grow this year and next at a moderate pace, despite some recent poor data that has sparked fears of a slowdown.

That would keep the Fed on course to slowly taper its currently $65 billion a month stimulus program, a plan which has already driven interest rates higher and added to turmoil in emerging markets.

But she stressed that policy remained contingent on the labor market, where recovery remains "far from complete."

And she allowed that when the Federal Open Market Committee, the Fed's policy-making body, meets next in March, it could weigh a pause to the taper if economic conditions show a significant deterioration.

"I expect a great deal of continuity in the FOMC's approach to monetary policy," she told the Financial Services Committee of the US House of Representatives.

"I served on the committee as we formulated our current policy strategy and I strongly support that strategy," she said.

Questioned on policy for the first time since becoming the first woman to lead the world's most powerful central bank, Yellen stuck to the script of Bernanke, unsurprising since she was his close ally as Fed vice chair for the past three years.

She described an economy in fairly good shape, with inflation subdued and no significant danger from the turmoil in emerging markets, some of it sparked by the Fed's stimulus cutbacks.

The recent bouts of volatility around the world "do not pose a substantial risk to the US economic outlook," she told the panel.

Still, like her predecessor, she stressed that unemployment continues to be a problem and held the focus of Fed policy makers.

Even at January's 6.6 percent, the unemployment rate is "still well above" the level that FOMC policymakers think would be a strong and sustainable level.

She cited the still high numbers of people forced to work part-time because they cannot find a full-time job and those unemployed and looking for a job for more than six months.

Because of that, she insisted, the Fed would not automatically end the stimulus and begin raising its base interest rate when the unemployment rate falls to 6.5 percent, the target threshold it spelled out in December 2012 for tightening monetary policy.

Crossing that line "will not automatically prompt an increase in the federal funds rate," she said.

Asked by legislators about the poor December and January jobs reports, she cautioned that it was "very important to not jump to conclusions." She said that it might it eventually prove that severe winter storms had tamped down hiring.

"It's important for us to take our time to assess what the significance of this is," she said.

Yellen also stressed that inflation remained tame, while suggesting there was little threat of deflation.

Although the inflation rate has been a low one percent, far from the FOMC target of two percent, she said that the recent weakness was likely "transitory," influenced by falling prices for crude oil and for non-oil imports.

Markets and analysts took Yellen's message of her arrival keeping a steady course on monetary policy at face value.

The S&P 500 index finished the day up 1.1 percent, also likely helped by news of a possible deal for Congress to raise the country's borrowing ceiling.

"Her statement was effectively an expanded version of the last FOMC statement, with no new signals," said Jim O'Sullivan, chief US economist at High Frequency Economics.

"In short, recent data and events have not changed the Fed's game plan. A smooth transition from the Bernanke era."